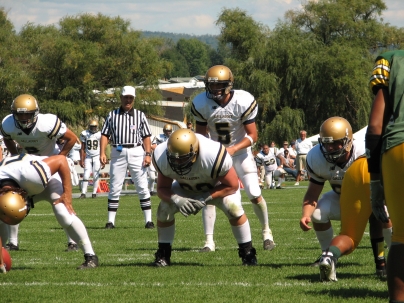 You have to know who to block before you block them.  Although the inside zone has a concept may be elementary in nature- just block your gap- but because of the constant pre-snap movement of defenses it’s important your players understand how this affects their blocking responsibilities.  In this case, we will report the various ways in which coaches teach their lineman to block the inside zone.

According to our research, 63.6 percent of coaches say a two-foot split along their offensive front is most suitable when running the inside zone scheme.  While most coaches preferred a horizontal split of two-feet along the offensive line, some coaches like 23-year NFL veteran Tom Lovat stressed the importance of the vertical alignment off the line of scrimmage.  Lovat talked to his players about creating the neutral zone so that his offensive lineman had almost a yard before they made contact with the defenders.  “Our earhole would be on the belt buckle of the Center,” said Lovat.  “The defensive linemen have to align on the ball.  So this creates an area where you can be moving forward all the time.  You shouldn’t have to move laterally.  Even if you’re covered, that player is a half of a yard off you anyway. If you crowd the ball he’s up in your face.  By the time you’re foot is off the ground he would stuff you.”

There are still a faction of coaches- 26.1 percent- that do prefer a split of three feet along their offensive front.  These splits have been made more common with the Mike Leach school of thought of extending the front to open larger run lanes for the back.  Leach keeps his splits at three feet for a variety of reasons that he explained to us on the record back in 2011.  “To me, the ultimate offenses in terms of distribution are what we do and the old school wishbone offense and both of them have wide splits with their lineman.  We would do it for zone run lanes and pass blocking assignments because the edge guys are now wider from the QB than they would be.  We start out at three feet.  If we had no trouble in blocking them than we would widen, if we had trouble then we’d tighten them.  Defenses would try to keep a guy in the middle of a gap and shoot that gap, if they did that we would keep it at three feet.  We would just take deeper drop steps to get angles in our run game. No defenses ever had success in doing that [shooting gaps] against us because, again, it wasn’t something they would consistently do so they weren’t comfortable in doing it.  They’re not good at just shooting gaps because they haven’t done it except for three practices in preparing to defend us.”

Once the splits have been determined, a decision needs to be made on how to identify various defensive fronts to run the zone scheme.  While there may be differences in opinion on this, the majority of coaches- 37 percent- use a concept identification system such as even or odd front.  In its simplest form an Odd front is any front where the offensive guards are uncovered such as a 3-4 (Diagram 1) or 3-3-5 (Diagram 2) while an Even front is typically a four down front such as a 4-3 (Diagram 3) 4-4 (Diagram 4) or 4-2 (Diagram 5).   This is similar to what Clayton Hall, an assistant coach at Gallaudet University tells his offensive linemen.   Hall is more specific with concept names.  He will tag an “Over front” as a 3-technique and 6 or 9 technique front side with 1-technique backside (Diagram 6).  He’ll term an Under front with a shade, 5- technique, 9-technique front side and a 3-technique and 5-technique backside (Diagram 7).  He’ll term “Even Stack” for any  4-4 or 4-2 front and he’ll term “Okie” to any base 3-4 defense with two 5-techniques with the exception of “Okie Philly” for any Odd Front with two 4i techniques (Diagram 8).    Finally, “Bear” would denote the 4-6 front with two 3-techniques (Diagram 9). 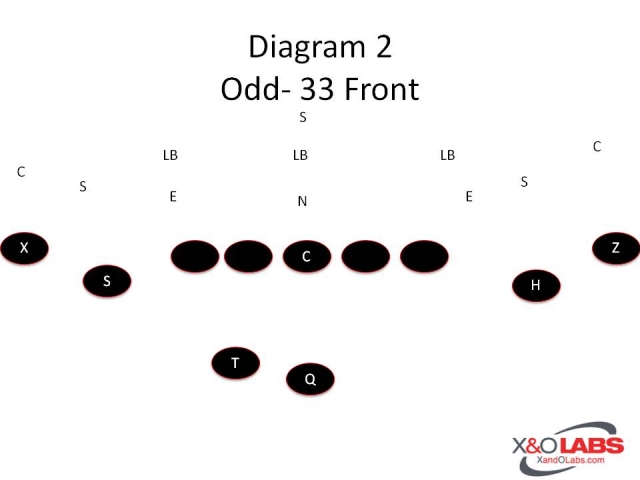 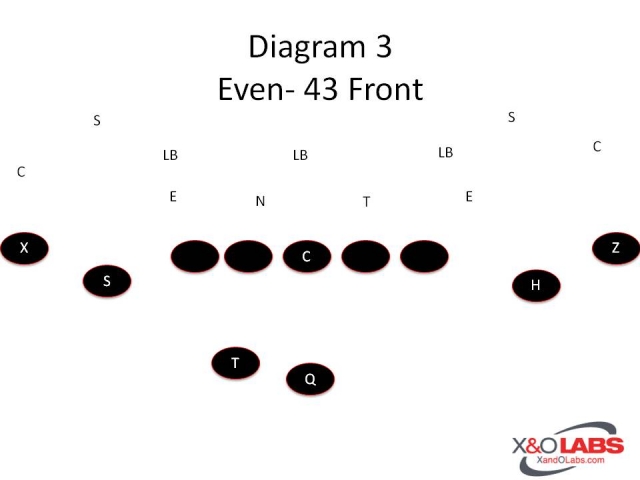 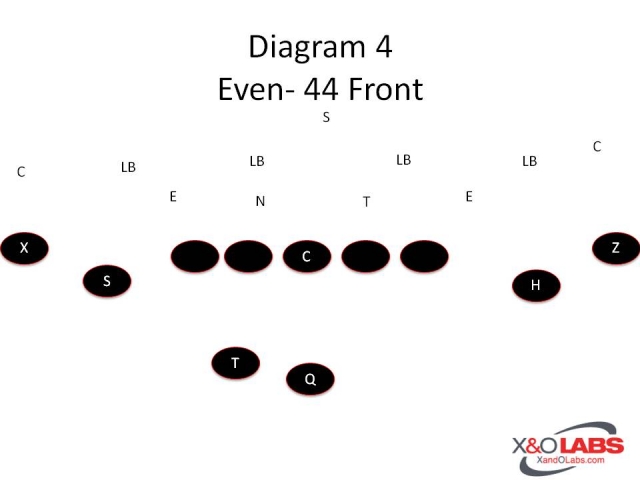 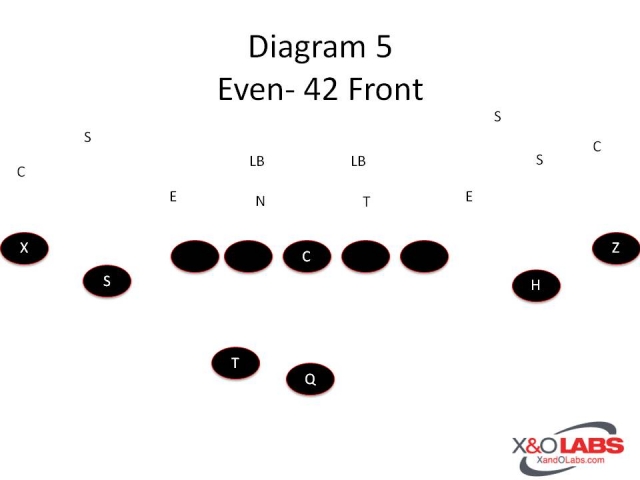 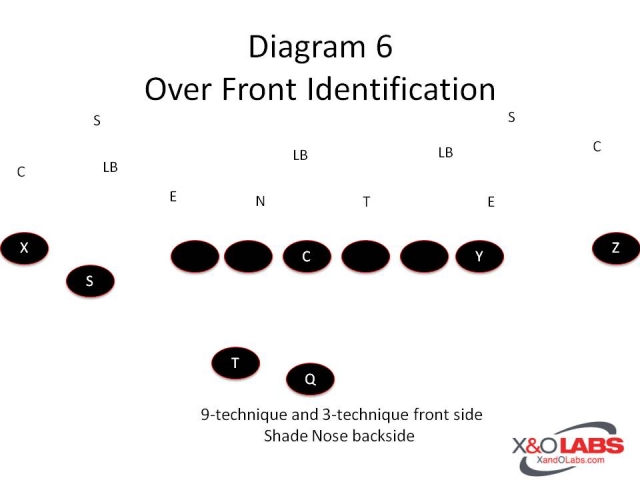 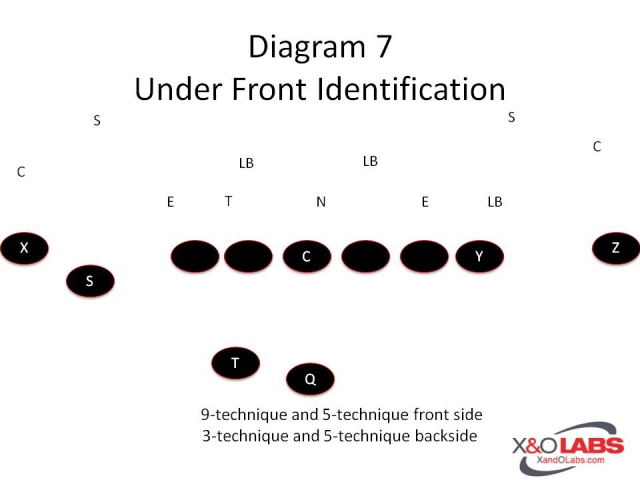 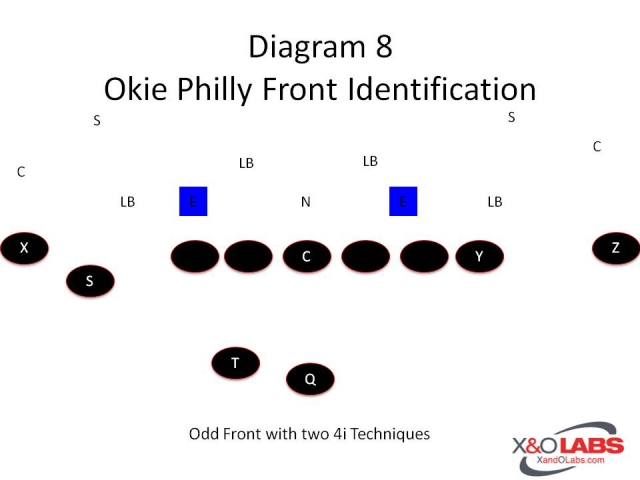