Inside Zone: 17 Solutions to Increase Production 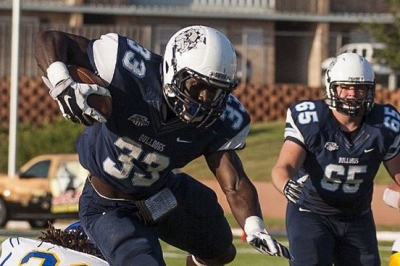 The most important on the field job of any coach is to improve your players’ technique. Here at SWOSU, we use practice and game film to point out errors in technique and, more importantly, how to fix them.

This clinic report will review the main coaching points for the offensive line on the Inside Zone play and how to correct common mistakes based on whether they are facing a play side shade, back side shade, or if they are uncovered.

Common Errors Against a Play Side Shade:

Rule/Footwork: The initial six-inch step works for width with play side foot. The second step mirrors the first step with the back side foot. As he moves, he must keep his toes slightly outside of ankles and knees inside of ankles to maintain power angles. He must also pound the insteps of his feet into the ground to create power.

Error #1: Lineman is not gaining width on first step

The player is stepping underneath himself with first step and not gaining width. A major coaching point to fix this is to have him put the majority of his weight opposite the direction he is going. This allows him to push off that foot and forces him to step with the correct foot.

Have the player(s) line up with play side foot directly next to a line on the field. This gives a visual landmark to show the player that they are gaining width on their first step. When we don’t have lines, I often use a rolled up towel or t-shirt can be used instead. 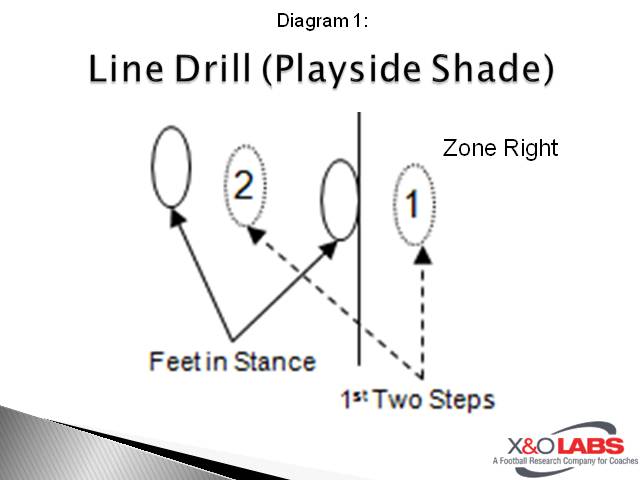 We want to get our hands on the defender as soon as possible. To accomplish this, our players must not load up their elbows. We want the player’s hands as tight as possible to each other to get inside hand leverage. Upon contact, we want the player to be heavy with the back side hand so he can’t be thrown by a defender as they react to the runner cutting back.

This not only decreases power, but it will result in holding penalties by grabbing outside the framework of the defender.

One way to get the hands tighter is to have your players clap their hands together in front of their body as they execute the punch. This also takes care of anyone with the habit of loading their elbows. We also use volleyballs or medicine balls instead of hand shields to force our players to get their hands tighter. We teach them to “aim small, miss small.” 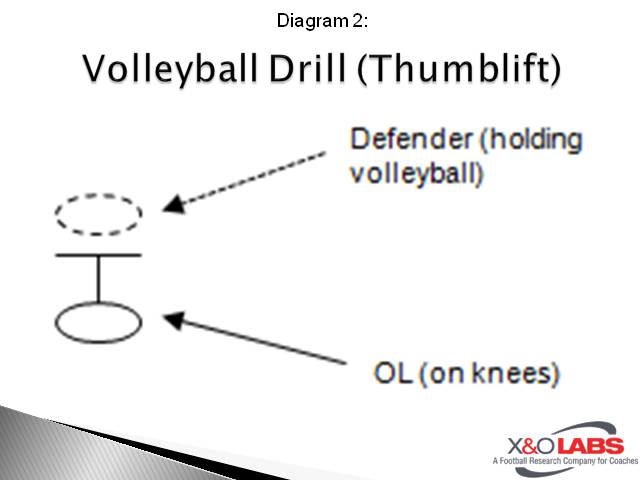