By Rich Alercio
As told to Mike Kuchar

Editors Note: The following material was presented by X&O Labs' offensive line researcher, Rich Alercio, on how he blocks his zone schemes.

Many coaches teach the inside zone (an interior play that will hit within the tackle box) and the outside zone (a perimeter run scheme) in two separate ways, but I try to combine the same blocking schemes in both runs. In theory, both zone plays rely on a vertical stretch by the defense in which it is the running back's assignment to find an opening in a gap and explode through it. I teach both plays the same exact way to the front side, the only difference is the back-side of a stretch play when lineman need to work across the body of the defender to their gap. The play looks and feels the same to a defense, which is what makes using the two in combination so effective. The only difference is the path of the running back. On the inside zone, the running back pushes to the heels of the offensive lineman reading the first down defensive lineman to the playside. In the stretch scheme, the back's aiming point is the defender on the outside of the tight end. Although this report will focus on offensive line play, the back is just as important, as he must take the same steps and move in the same manner.

Displacing Defenders on the Inside Zone

The inside zone is a play that works off the displacement of defensive players, with the intent of getting them moving laterally down the line of scrimmage and cutting up into a gap where they have vacated. The common misconception about the inside zone is that it's a straight ahead play and that's entirely false. You rely off the displacement of the defensive lineman or linebackers to find the spots that are vacated. It's anything but a downhill play. It's a slow-to-fast play where we're taking a look and seeing how defensive linemen have displaced themselves laterally. The whole idea of the play is to get the LB to run in the direction that we are running, hold lineman with combination blocks and find the spots in-between.

But it's the lineman's job, not the back's, to displace the defense. Whether the called play is zone or stretch, all offensive linemen must take the same exact steps. The critical thing is everyone is stepping with the playside foot, right or left. We actually make a "Ricky" or "Lucy" call denoting the right or left foot. What makes it simple is playside linemen will either take a reach or a base step (the same steps addressed in Alercio's man blocking report) depending on if a lineman is covered or uncovered. Regardless of the type of step each lineman is taking there are two components of executing the play effectively:

Everything nowadays is about covering guys up, that's all you need to do. The days of putting your head on this or that side and steering him in a specific direction are over. There is no more drive him back for five yards and put him on his butt. When that happens, it's a special thing. It's just cover him up and let him run; eventually he'll work himself out of the play. You can't turn your butt to the hole. Stay with him and stay square, your heel cannot pass your toes.

Four Blocking Scenarios on the Playside of Zone Runs

To me, there are four main scenarios that a player has to ask himself when determining what block to execute in a zone scheme: 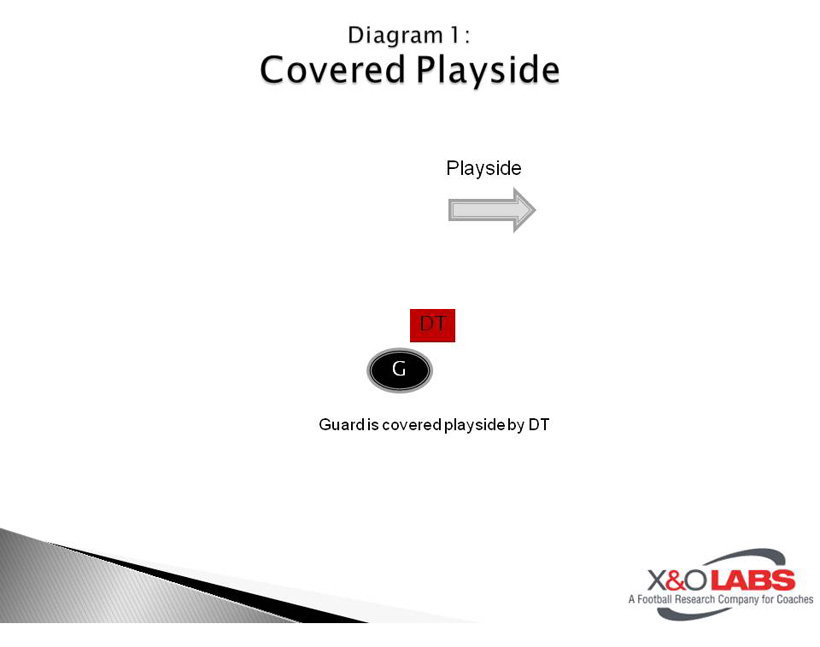