The option offense is all about numbers. We all know that. So much time is spent with coaches devising formation structures to find ways to get an advantage at the point of attack. Much of this comes in formation placement, but we found that’s not the only way to outnumber defenses. Some of this manipulation comes in the form of how coaches are teaching their players, mainly offensive linemen, to block the option game. In order to defend the zone read and zone read option game, a defense needs to out-number it. It’s as simple as that. But the problem is the defense doesn't know where the play side is going to be and where the read side is going to be. Sure, there are tells like the placement of the offset or the placement of the cruiser, but that all can be manipulated.

We studied two zone read option offenses from two successful programs. It’s important to note that these teams are not what you would call pure option offenses. They are zone offenses that have found ways to integrate the two and three back option game into their play menu with a great deal of success. They were spread option coaches that simply adjusted their zone run game to add a double option element to the read side of the play. That adjustment came in the form of adding another offensive player in the hip position (whether it be a tight end or another back) into their formation structures, who has the potential to be a front side or backside blocker (Diagram 1). This formation is nothing new. These days it’s a challenge to watch any game at the high school or collegiate level and not see this formation. So, rather than focus on the formation, we wanted to tailor our research on how run game coordinators were designing their zone option run game around this formation and specifically how they were attacking defenses with it. 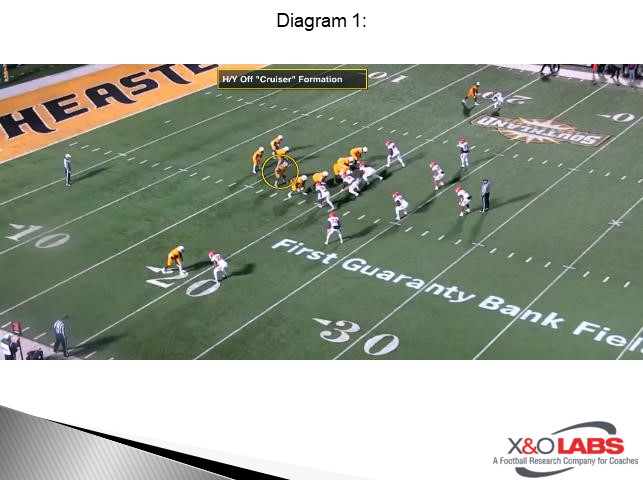 The benefit of having this player tied into the option game lies in the predictability of how defenses will defend it. In many cases, that comes in the form of “back gapping” the movement of the H/Y, or the cruiser in this system. The potential presence of that H/Y to the read side of the option scheme, will enlist the presence of another defender to account for him. And what that happens it

The video below began the process of this project. After watching the University of New Mexico under former offensive coordinator Bob DeBessee gash opponents with its three-back option attack, I was astonished at how they were getting play side numbers in the zone scheme. Consider the following clip from the 2016 season against the University of Wyoming. As Wyoming back gaps the movement of the H/Y, the back is able to push the ball out the front side for a huge gain.