Training the Anchor, Wall and Kick Players in Pin and Pull Concepts 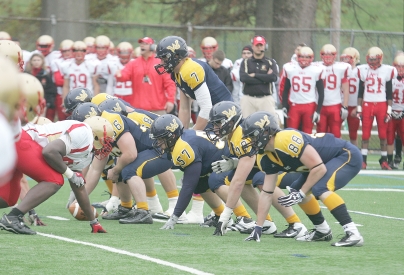 Editor’s Note:  Coach Rosenthal is the Tight Ends and Assistant Offensive Line Coach at Wilkes University. After graduating Wesleyan University and playing as a graduate student in the fall of 2010, I started my coaching career volunteering at Yale University, working with the offensive line during their spring practices in 2011. That summer I accepted a GA position at Endicott College, where I worked with the running backs for one season. That season I coached a CoSIDA 2nd Team Academic  All-American. After one year, I went to Wilkes University where I have spent the last 2 seasons. Both seasons I placed a different player on the All-Conference list and have placed multiple student-athletes on the Academic Honor Roll every year.

At Wilkes University we are a multiple-I formation, run first offense. We are very diverse in our formations and will motion and shift on many plays to try to put our offensive skill players in an advantageous position to do their job on a given play. At the beginning, we focused on gap scheme runs and found ourselves to be very tight end and inside run oriented. We knew we would need to add some diversity to our run game and began to look for effective ways to push the ball outside. After some research we decided on a few “Pin and Pull” run schemes, two of which I will outline in this article.

As a gap scheme team, we knew some of the adjustments and issues we would face from defenses. In our research for our outside run game, we wanted to be able to find schemes which not only fit our style of play, but could attack the adjustments defenses would make to attack our power scheme. The three reasons we felt comfortable adding the “Pin and Pull” series were the following:

The two plays I will diagram in this article are the “Toss Truck” and “Toss Taxi”. These two run plays are very well suited to be taught together, as the plays are so similar that many of the rules are the same. By teaching these two schemes together, you are able to reinforce the key point of the plays and have a better chance of the players retaining the information. 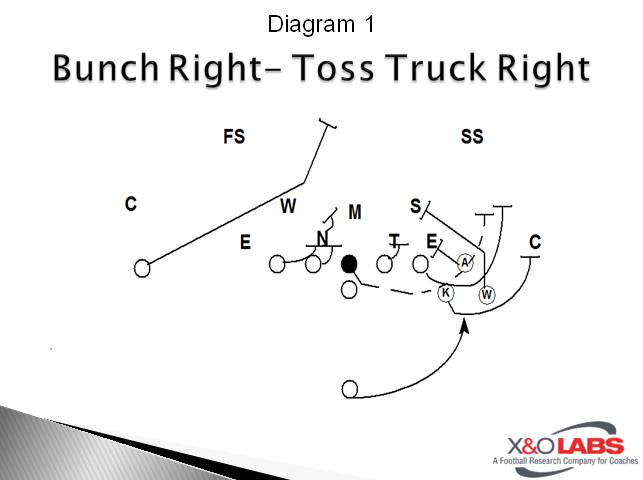 Anchor: Block the first defender inside of you, on or off the ball

Wall: Block the next defender inside of you. Build a “wall” on the defense

Kick: Block the CB. Chase the defender’s outside number

PST: Alley puller. Clear the Anchor and Wall and get vertical. Look inside-out, top-down. Block the first bad color in the alley. If Anchor or Wall fall off block, clean up the mess

PSG: Covered- Reach block the man on. Facemask through the outside number. Uncovered- Mike responsibility. Jump through and block him now if possible. If not, pull for width and work off of PST’s block

C- Covered- Reach the PS A gap. Bring the backside of the OL with you. Uncovered- Mike responsibility. Jump through and block him now if possible. If not, pull for width and work off of PST’s block

BSG- Scoop the BS A Gap. Must get the Will LB blocked

BST- Scoop the BS B Gap. Must get the Will LB blocked

Notes: Must get the play started, by blocking the first level first. OT does not have an assignment, block the first dangerous color. If there is a 2nd puller, work off the OT’s block. Any unblocked defender takes precedent over Mike responsibility. PSG and C must communicate who has the Mike responsibility. 2nd puller is always responsible for any front side run-through.

Defining the Anchor, Wall and Kick: The Kick is always furthest inside offensive skill player and may come from the backfield. The Anchor is the next outside and the wall is the furthest outside.