Here at Mechanicsburg the Buck Sweep and Pin Pull Concept has become a big part of our offensive identity. To protect these concepts and to create more chunk plays the play-action game we have developed to put specific defenders in run/pass conflict has been remarkably successful for us as well, now most of our offense is based on it. Each week we want to find formations to create a soft edge or give us a numbers advantage to get the ball on the edge. 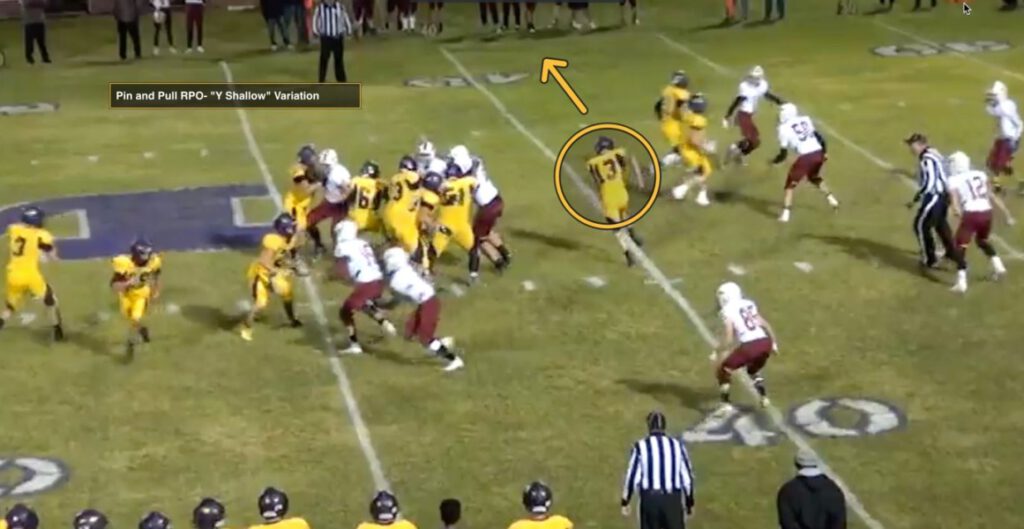 We have 4 to 5 base formations we use but we will never limit ourselves in this department. We will use Empty sets, 1 Back, 2 back, TE/Wing sets, and we will condense our receivers on a majority of these to create extra gaps. We also use a Strongside and Quick side on our OL, the strong side is where we run our Buck series and the quick side is true pin/pull. This allows us to steal reps in practice since all our guys play both ways and a lot have to play special teams as well.

Here are our favorite formations that we will almost always carry into a game.  The first one is a TE/WING set to the strong side and two WRs “squeezed down” to the quick side, this creates 10 gaps the Defense must account for. We will run Buck to the strong side and QB pin/pull with the running back leading to the quick side. We love using tight ends because it makes most 3-4 defenses into 5-2 teams and it makes even front defenses pick where they want to play their defensive ends (if they get too wide, we will run a power scheme inside of them to keep them honest). The diagram below shows one of our favorite formations with our favorite play out of it drawn up. It's a simple RPO with buck sweep being run as the base run and the two backside wide receivers running a simple curl flat (bubble) combination. The quarterback reads the BSILB vs a 4-2 box and he will read the backside stack LB vs a 3-3 box. Once the quarterback decides he has a throw read he simply goes curl to bubble.

Route Details: The outside WR who is on the ball should angle outside of the flat defender if the defender is in his framework or a yard or two outside of his frame then work to 8 yards vertical while using his eyes to push the corner deep then snap it off and come straight back downhill into the window between the 2 linebackers. If the defender is 3 yards or more outside of his frame then he will work inside of him to 8 yards vertical and sit down in the window showing his numbers to the QB. Once he catches the ball, he needs to get vertical immediately to try and get 5 more yards. The inside WR needs to drop his outside foot and get as much width on his bubble route as possible to stretch the flat defender. Once the ball is caught, he needs to be ready to win a one on one opportunity.

QB Read Progression: One of the reasons we love this play is we feel it is amazingly simple for the quarterback. Once he identifies the backside inside LB he reads him post snap. Once the ball is snapped his eyes go straight to the read key if the back flows hard, he will pull and go curl to bubble. Most of the time the curl will be the throw that's open, if the read key flows hard and the curl is taken away then go quick to the bubble. This should be a great third option or check down option with a good athlete one on one out in space.

QB Footwork: At the snap the QB will step back with the foot closest to the RB and then ride the RB through his opposite hip which is when the decision has to be made to give or pull. As he rides the RB the QB should shift his weight to his foot that started opposite the RB. This allows the QB to either be ready to throw immediately or to flip his hips and turn two just like a second baseman to make the throw the opposite direction.

Drill Work: Since the Buck sweep has become our bread and butter, we allow for a 10-12 play period of practice to be nothing but Buck Sweep with RPOs in a team setting. We tell our scout team guys to read their keys and go somewhere fast so even the coaches don’t truly know what read the QB will get. We will run these plays fast and up-tempo so we can get 10-12 team reps in about 4-5 minutes. This makes it 2nd nature for our players.