Editor’s Note:  Coach Floyd just completed his 10th season as Head Coach at Shiloh Christian High School, compiling a 99-29-1 record.  During this time, Shiloh has won 4 State Championships & 1 State Runner-up finish, while also finishing nationally ranked 3 times.  Coach Floyd has developed 5 different QB's that are currently in the top 10 in the Arkansas State record books for offense, and also coached the 2010 USA Today National Offensive Player of the Year.  The Shiloh Hurry Up Offense has averaged just over 40 points/ game during the last 10 seasons.  The American Football Monthly magazine recently listed Coach Floyd as one of the Top 10 coaches in the country under the age of 40. 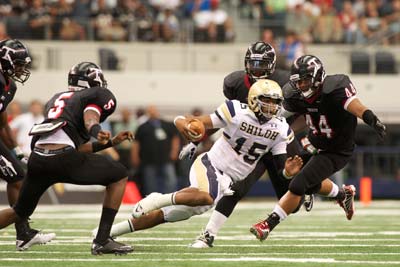 The buck sweep is one of our top four run plays every year at Shiloh.  We run power and outside zone that helps complement this play as well.   We always try to put the defensive ends in a bind.  We want to show them several different looks throughout the game.  On the power, we’ll kick the defensive end out, and then try to get the edge on him and hook him on the buck sweep.  Then we’ll also zone him up on our outside zone.  We will do all these out of similar formations so that we give the same look.

It’s an easy adjustment against any type of defense.  We will use several different formations to run this play, and either the RB or the QB will carry the ball.  We will run this play in a 2 x 1 – 2 back formation, a 3 x 1 set and use a TE when necessary.  We like using a TE when we are having trouble blocking the DE, either by his alignment or maybe he’s just a great player.  Sometimes it’s easier for the blocker (TE) to already be on the LOS in order to make the block.

Motion is always good with this play as well.  Once again, the key block is the DE, and there are many different ways to attack him.  We usually just block him with our FB, but we can also bring our #1 receiver in motion and “blast” the DE.   This then allows our FB to loop around and try to block the corner.

The key to the play is getting the DE blocked down and establishing the crack block, which usually comes from our #2 receiver.  On the “crack” block, we obviously aren’t looking for any type of “cheap” shot or anything.  It doesn’t even have to be a big hit or an “earhole” type shot, sometimes it’s just a deal where you shield that LB.  We’ll make sure we are teaching a good, clean block on the LB.

The most important thing is the first few steps of the FB.  He must take a great angle to block the DE.  We’d love to get the DE blocked down or “hooked” but sometimes that’s not possible due to alignment.  We must at least get to where we are even with him face to face because we don’t want the DE to get outside of our block.

We will run this formation, usually with some high motion from our #1 receiver coming behind the QB or he can block the near safety as shown below.  This can be difficult for the FB to block the end due to his alignment, but we run the power play out of this formation so teams are used to us blocking the DE out.