Editor’s Note:  Mike Kuchar sat down with Joel Rodriquez to talk exclusively about the MAP concept, a double-pull concept in Fordham’s run game that has averaged 8.3 yards per carry.  Joel Rodriquez is the offensive line coach at Fordham.  He had previously served in the same capacity at Bryant College (RI).

The crux of Fordham’s offense- one that has netted 522 yards per game this year- is a no huddle, high tempo, 10 and 11 personnel unit that takes advantage of misplace defenders by using the zone read game and play action concepts off of them.  In fact, my first interaction with what Fordham does was when I sat and listened to the Rams head coach Joe Moorhead talk at a clinic about the various pass concepts he uses of his zone read run game.  Though this may be a topic for another conversation, I couldn’t move my pen fast enough to write down all of his coaching points.    What I did catch was his admirable comments about his Offensive Line coach and run game coordinator Joel Rodriquez and the terrific job he does designing.  So I made it a point to go drop in on Coach Rodriquez to talk about how Fordham is so successful running the ball.

What he divulged to me is what he calls his MAP concept- a Man/Gap hybrid used to take advantage of defenses that play various games (exchanges, scrapes, etc.) to the read side of the zone read.  At its core the MAP scheme is a man concept to the front side of the play and a zone concept to the backside of the play.  The offense lineman to the play side have man assignments while the backside lineman are responsible for backside gaps, at least in theory. While it may seem like Power in structure, the front side man blocking assignments prevent any possible double teams while the backside Tackle is free to climb to the second level as a double puller.  (Diagram 1) “We didn’t want to Trey or Deuce block because we just don’t have the personnel,” said Rodriquez.  “It doesn’t take much to install it- it’s zone for the front side of the line and it’s a different read for the linebackers.”  The reason why it’s a different read is because the running back executes a “cross bow” assignment by lining up away from the call side.  His footwork will be different based on whether or not the Rams or giving it or reading it. 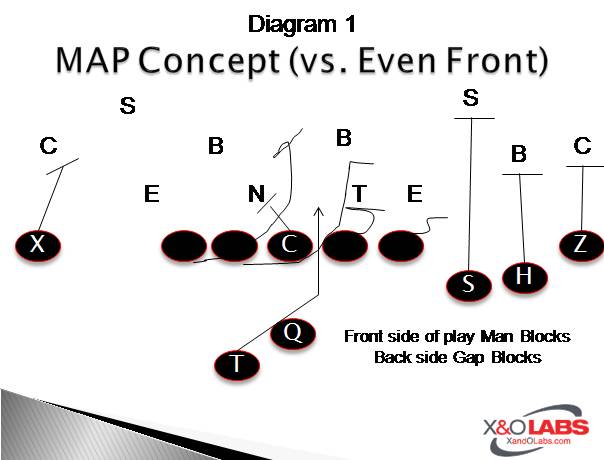 For the play side Tackle, it is generally inside zone blocking.  He will block man on to outside, could be head up or outside.  Rodriquez’s coaching points for him are below:

ü  Don’t care which leverage he gives, by movement or alignment

ü  Strain to stretch whichever leverage the defender gives you

The play side Guard has essentially the same assignment as the Tackle but a much bigger responsibility.  He has the man up to inside, whether it’s a 2i, 3-technique, etc.  But his biggest responsibility is to not let any player cross his face to the play side.  “If he (the defender) works a side, press him back inside and square him up. Cannot let a player cross his face.   Rodriquez’s coaching points for the play side Guard are below: