Teams that I have coached have always had a run-first philosophy. We have run both Zone and Gap schemes, depending on personnel. I started running “Buck Sweep” 5 years ago since our Head Coach was a huge proponent of the play. The beauty of the play is that it gives the defense the illusion of running wide, but the combination of in (gap) blocks along with the pulling G's creates a very effective scissors effect that creates large off-tackle holes. You must spend time on the timing between the pulling G's and the TB's path. This play depends on the success of 3 blocks: the TE's block, PSG kick out, and BSG seal pull to LB. If all three of these players stay on their path, the play becomes very hard for a defense to stop. When combined with play-action (RPO) and various formations, this becomes a very difficult play to consistently stop. I have run the play out of many personnel groups, but will always have at least one tight end. We have run this play out of 12 and 13 personnel packages. In this report, I will try to document the various ways we have run the play, including some potential passes. I will also address how defenses have tried to align to stop it and what it opens up.

The basic rule for this play is that both Guards will pull, with the play side Guard kicking out the EMLOS and the backside Guard (BSG) skip pulling up to the play side LB. All play side linemen and Tight end will block the first man to their inside. The Center will block back to cover for the backside pulling Guard and the backside Tackle will “Seal the B-gap” to prevent any backside run-throughs. The only exception to these rules is the Center blocking frontside vs a 0-shade or 1-technique. We have tried having the Center and PSG exchange assignments, but while this worked on paper, we always had pulling issues with the Center. Play side receivers will stalk block the MDM (most dangerous man), while our backside receivers will either run a bubble or backside quick game route (hitch, slant, fade). The QB always has the option of throwing the ball backside if we have a numbers advantage. We don’t throw this enough.

We have run this play out of a variety of formations, but this report will concentrate on four formations in 2 personnel groups: 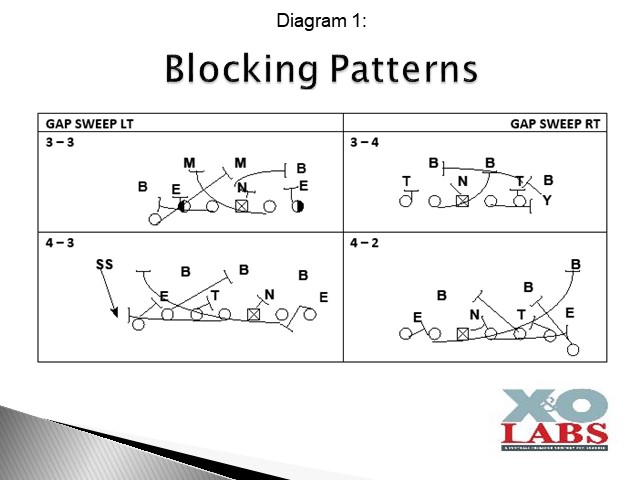 We teach our offense by breaking down each position’s responsibilities, regardless of play and alignment. For example, our backside WR’s will always run a bubble/now screen if there are 2 receivers, or the single receiver will run what we call a money route: hitch, slant, or fade. We try to teach our QB to take advantage of any numbers advantage that we may have. We have thrown bubble screens even though the Gap Sweep play was the play call. In addition, by having our WR run a route instead of automatically blocking, I believe he keeps the DB's and OLB's more focused on stopping the pass, instead of getting a quick run read and pursuing the play. We can tag the run play and indicate to the QB to look to throw first.

Our linemen are taught blocking concepts, so they are not required to learn the individual plays. The blocking concept is a part of all run calls. This is either signaled in by a coach or communicated to the line by the QB. In the plays above, Gap Sweep Lt is learned by the offensive line as “Paul,” while Gap Sweep right is “Peter.” We do this so we can run the play with multiple ball carriers, but the line only has to know their concept.

Y: Gap block 1st threat to inside. May double team with OT vs 5 – technique. Never block anyone outside of you.

PST: Gap block 1st threat to inside. May double team with TE vs 5 – technique in an odd front.

C: Cover for pulling BSG. Exception: vs play side 1 – technique or Shade, step play side and reach block DT

BST: Seal B – gap. Cut off any backside flow if no one threatens your B – gap.

WB: Gap block 1st threat to inside. May double team with TE vs 6 – or 9 – technique. Never block anyone outside of you.

QB: Catch snap, step back 1 step, place ball in TB's stomach, and ride him for two shuffle steps. After handoff takes 1 – 2 steps into the line or fake backside throw. Pre-snap Numbers advantage for bubble or money.

The rest of this report will focus solely on how Coach Kent and his staff gain numerical advantages in the pin and pull concept.