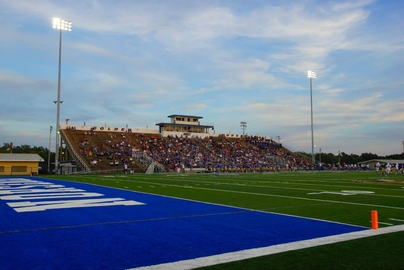 Author’s Bio:  Ryan Schleusner has spent the past year as the Offensive Line Coach at Northeastern Oklahoma A&M Junior College.  I am currently the Offensive Line Coach and Run Game Coordinator for Miami (OK) High School.  I would first like to take the opportunity to thank Dan Ellis and X and O labs for the report on the Midline Play adapted off of Outside Zone blocking.  We implemented the play this past year, adjusting it to our inside zone framework and had great success with it.

We ran an up tempo shotgun spread offense this past year with elements of the pistol at times.  Our main run plays were Power Read, Counter Read and QB Counter Read.  These schemes were utilized to take advantage of our Offensive Line’s athleticism and to get the ball in our playmaker’s hands in space.  Using these scheme’s we were able to rush for over 225 yards per game and win the Southwest Junior College Football Conference Championship.  The main play’s that I will be talking about in this article are the Power Read, Counter Read and play action off of them both.

Our base counter scheme from 10 personnel was installed as a basic gap scheme.  Everyone on the play side was responsible for their backside gap and looking to combo down linemen.  On the backside of the play either the guard or the center, depending on which has an immediate threat in their gap, would pull to kick out the playside end man on the line of scrimmage.  A lot of teams teach this block as either a kick or a log, depending on what the defense gives you.  I do not believe in teaching this way and demand that the puller kick out the EMOLS.  The reason the pull is to be passed between the guard and the center is to prevent penetration on the backside of the play  `1  The second puller is the backside tackle, who must read the block of the guard to determine if he is to insert himself under the kick out block or “bounce” the pull outside.  Although I do not give the guards the option of not kicking out the EMOLS, the tackle must still read this and be able to adapt to the EMOLS not getting properly kicked out. 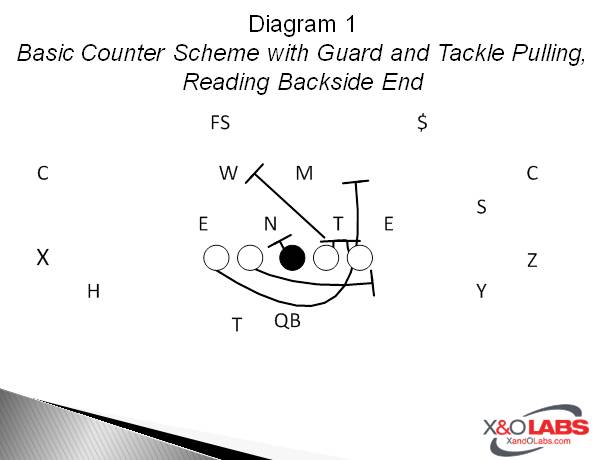 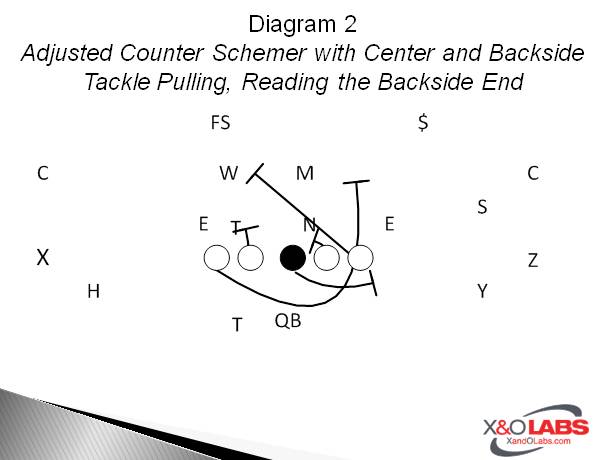 We did this for two reasons, the first one being that our center liked to pull and was good at it, so why not find ways to let him do it.  Secondly, leaving the backside guard to block out on the 3 technique allows the tackle to pull cleanly and not worry about getting knocked off of his pulling track by penetrating defensive lineman backside.  We would also occasionally motion a slot receiver into the backfield for a pitch option, as you will see in the clips.