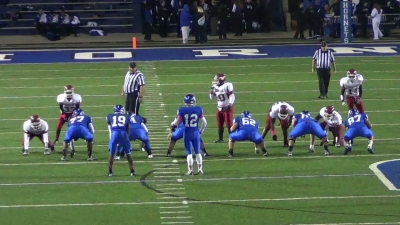 In 2014, one of our most productive plays was the Power Read. For us, the “Power Read” is a slow developing power scheme where the quarterback shuffles laterally and reads a defender. We usually read a defender at linebacker level. In our opinion, reading linebackers as opposed to defensive ends had multiple advantages. Not only did it create huge running lanes, but it removed some the pressure of quick QB decisions. It also set up play action throws and made defenders move laterally to stop the play. This in turn allowed us to gain the advantage and aggressiveness as we cut the ball up the field.

Addressing the Issues with the Power Read

While the “Power Read” was extremely productive, it had weaknesses as we schemed it from week to week. We felt it was vulnerable in the backside “B” Gap as we pulled a guard. Often times our backside tackle was not quick enough to cut off the backside “B” gap versus a 4i or 3 techniques. If we compensated by blocking the center back to aid the tackle, we lost our double team on the play side. This would, in turn effect our ability to create running lanes on the play side.

In order to combat these problems, we simply switched up our inside complementary schemes to adjust to weakness in our base “Power Read” play. Examples of these changes include having off tackle “down-kick or X” scheme such as “buck sweep” or “G” to our Power Read mesh. It is important to note that these concepts were already in our playbook in other forms. For that reason, adding them to the Power Read didn’t require any new teaching.

In addition, we researched teams that use a traditional “counter” scheme where the backside guard “kicks” the read key for the under (QB Pull). We decided to add that into our package to specifically to attack away from the tight end against an odd front.

I also should mention that our favorite way to run “Power Read” was to overloaded sets. We always would strive to block the play in which the QB could be right no matter his decision. We usually blocked the read key “over (for sweep)” and “under (for QB run)”. This can only really be accomplished in overload sets (shown below). 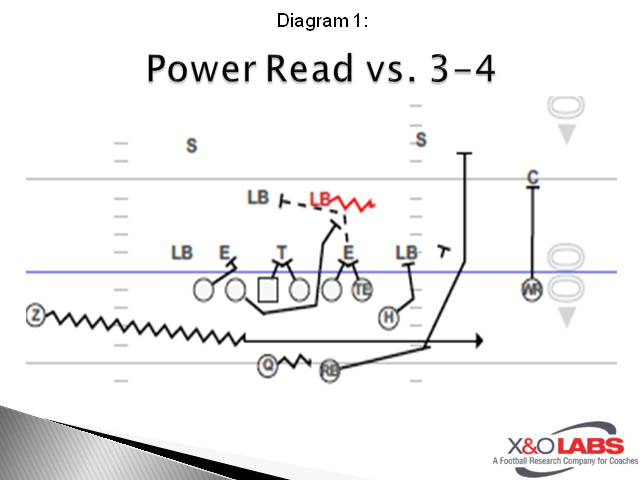 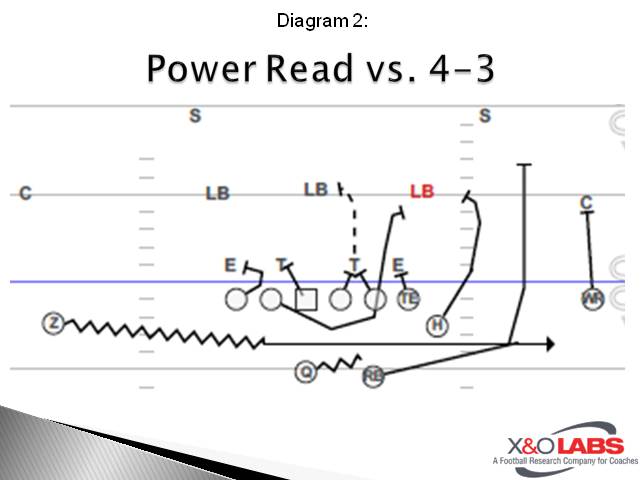 “Leave One, Block One” Philosophy

“Leave One, Block One” is the rule we beat into the heads of our linemen. “Leave One” determines who the backside guard is pulling to block. The backside guard is thinking he is the “Under” block for QB pull. Because this is a slow developing play sometimes the linebacker flies out and it is an easy block out for him. Other times we engage the backer in the box and he “washes” by the mesh as our QB cuts vertical. One of the keys is getting our guys to understand we are not trying to take the guys helmet off. Instead, we desire to be to merely engage and occupy the defender. If the guard is out of control, he will make miss too often and in this situation there isn’t a need to take that chance. There is no need to move a defender to create a hole on this scheme.

“Block One” is talking to the combo that has a double team on the play side. Most of the time, we set the combo on the B gap defender between the tackle and guard. Personnel or game plan might make us change the combo to the tight end and tackle. Either way the “Block One” ID determines the linebacker toward which the double team is working. The more that “Block One” player moves over the top of the combo the less help the inside gets from his combo partner.