At Butte Junior College, we use multiple personnel groups to help set up advantages we can build in the run game.  We often use multiple tight end sets to help create extra gaps and to gain an edge in the numbers game.  More recently, we have used a lot of motion to help set things up.  This also allows us to set up opportunities for big plays in the pass game.  We build our play action game plan directly off formations being used in the current or past game plans to create the same look against the defense.

The first formation is a 2x2 set out of 12 and 21 personnel.  We call it Deuce.  The H (off the ball) can be a fullback or tight end.  The H’s alignment is off the ball with his inside foot stacked behind the weak side tackle’s outside foot.  His feet are even, and he is in a two-point stance.  The first five plays are the same formation and motion. 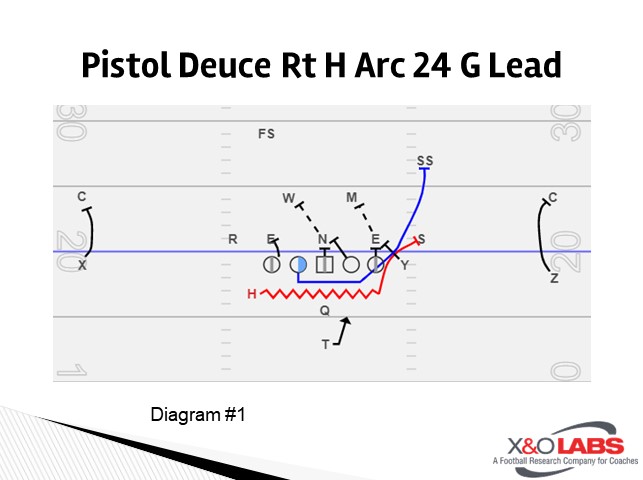 The above illustration is what most offenses call Power, but we call it G Lead.  We are blocking down on the front side of the play and kicking out with H.  The biggest coaching point for our H is to keep himself a little bit tighter on his motion when the ball is snapped to create a good kickout angle for himself on the end man on the line of scrimmage.  Our Y is blocking down or man in terms of his progression.  In this look, the defense alignment will create a double team with the Y and the playside Tackle.  Our Y needs keep his outside arm free on the double to keep his hips and shoulders more open.  This puts him in a good position to come off to the linebacker at the second level.  In this clip, we got our outside hand too involved and it put us in a bad body position to get to the second level.  Our backside Guard is leading up the hole and is looking to come off the double team at the point of attack.  He is skip pulling and tracking his eyes inside/out to catch any potential run through. 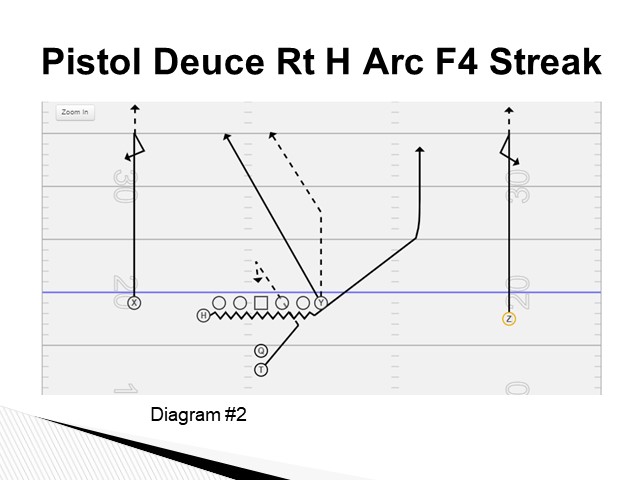 The above illustration is a play action off the same look.  It is a run action toward the motion and the route concept is four verticals.  Our Y is called the “bender”.  He is reading the middle of the field for a one or two safety look.  In this clip, it is a one safety (we call it middle closed) look and that converts his route to the other hash mark and his aiming point is 15 yards and 2 yards outside the opposite hash.  If it were a two-safety look (we call it middle open), he would split the safeties.  The route for the H a locked route and he is working to get width right away and his landmark is 2 yards outside the near hash.  We are trying to create a two on one on the safety and put him in a bind. 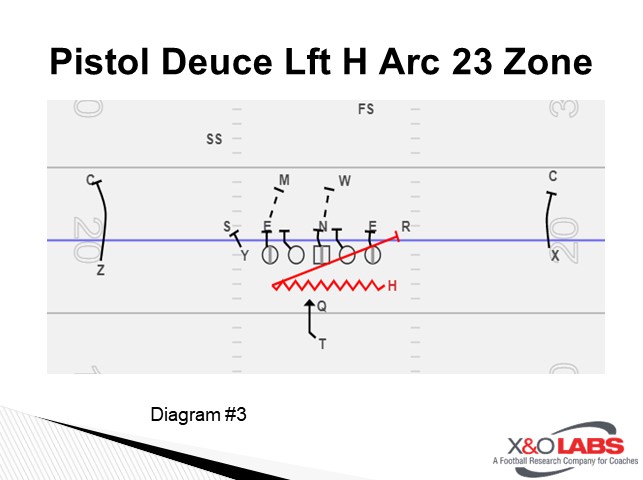 The above illustration is Inside Zone.  We are working zone blocking to the left and our H is coming back to his initial alignment for a kickout block.  We tell him to scrape the heels of the offensive line on his way back and to stay inside/out for the block.  The Y is blocking man in this look with a defender walked up on the edge.  On this block, we coach him to work to get push and focus on keeping his inside arm strong (get long) and to drive his hips at the inside hip of the defender. 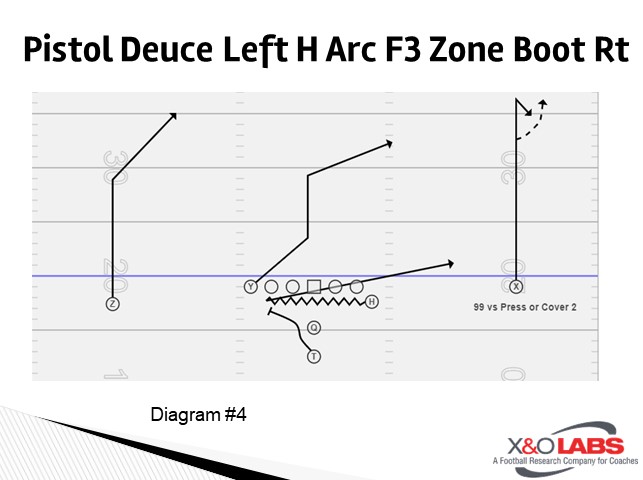