Like many programs in the Missouri Valley Conference, South Dakota relies on the power concept to be the lifeblood of its’ offensive menu. But as a heavy, multiple tight end personnel outfit, the Coyotes run its power concept with a D-gap track. Offensive Line Coach Andrew Prevost thinks that the size and strength of first level defense in the MVC won’t let you crease the A gap on gap schemes. Instead, the pull will usually get pushed from C gap out into the perimeter.

So, rather than be hell-bent on inserting the ball into the A gap, Coach Prevost and the offensive staff at South Dakota teaches a wider, D-gap track in its power concept. This provides a contingency against squeeze and spill defenses, and gets the back (or quarterback) on the perimeter with the addition of an extra blocker. And because the entry point for the back becomes two gaps wider, the puller has to slow down his timing to stay in front of the back.

“The search pull slows him down so he can visualize and see the linebacker,” said Coach Prevost. It’s important to note that South Dakota is a one-back power outfit, there is no kickout element in this scheme. 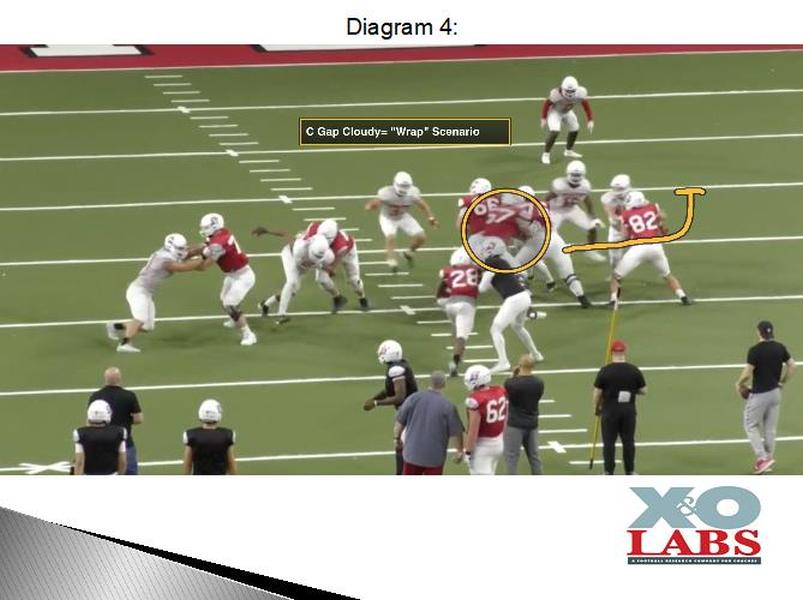 While the ball carrier is expected to bounce the ball in the D-gap power concept, Coach Prevost made it clear that if he doesn’t start in the A gap, he’ll never get to the A gap. So, the A-gap will be his initial landmark, but he’ll look to track an A-D gap path based on the reaction of the defense. “We have him chase the A gap and as the A gap window closes they go to B to C.,” said Coach Prevost. In order to do this, the running back will track the outside leg of the play side Tackle. Coach Prevost says it’s a rarity for the backside Guard to insert into the B gap, so instead the back will just follow the path of the Guard. “We used to have him fit the puller but we switched it and now chase the backside number of the puller,” he said. “But what would happen was that puller would wrap really tight and the back would be too wide and they would always want to bounce it.”