Chances are if you’re an offensive coach that utilizes the Power concept, you also have the Counter concept on your menu. It makes sense, particularly if you are using sniffer formations. While some offensive coaches feel that the Counter concept is the stepbrother of the Outside Zone scheme, formationally it marries up with the Power scheme because of the positioning of the sniffer, or B back, in one back offenses. In the Power scheme, that player is responsible for kicking out the C gap defender to the play side whereas in Counter schemes, this same player is assigned as the lead puller to the backside (Diagram 52A). We found that nearly 67 percent of coaches use the single pull counter concept in Spread personnel groupings. In this case, we will research the blocking assignments of the concept, the most preferable formations to run the scheme, how coaches are tying the sniffer into the formation as well as mesh points, ball carrier aiming points and the read concepts coaches are marrying into the counter scheme. 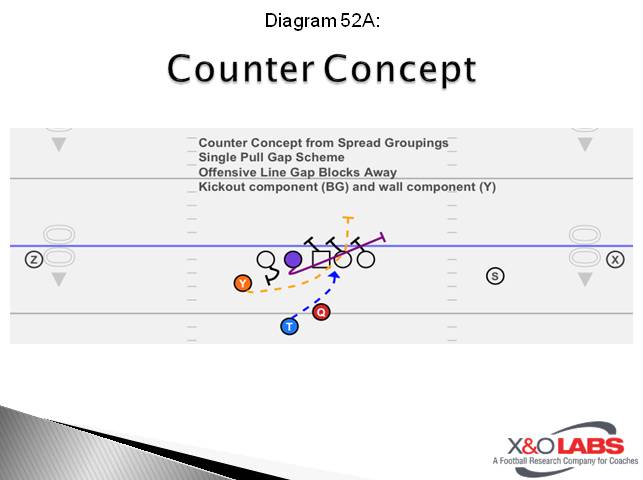 For the most part, the Counter concept is similar to the Power concept because it’s a “down, down, kick” gap scheme that leaves the C gap player to be kicked out (mainly by the back side guard) and the play side inside linebacker to be walled (mainly by the Y/H). While we’ve found that there are some coaches like Lance Parker, the offensive coordinator at Bryant High School (AR), who prefers to pull the backside tackle based on defensive personnel or front, most coaches will stick to using the backside guard as the kick out block. We detail the coaching points that coaches are giving that player later on in this case.

We’ve spoken with several coaches who use the “leave two” principle in blocking the Counter scheme. This means that the offensive line will leave the last man on the line of scrimmage and the next defender inside to be kicked and walled respectively. According to Nassau Community College (NY) quarterback coach Greg Lauri, this helps the offensive lineman for identification purposes. “The last man on the LOS will either be kicked out by the fullback or the TE, or we can read him as part of our RPO package” said Coach Lauri. “The first play side linebacker is for the pull player.”

One of the more interesting ways we’ve researched how to block the Counter concept is what Coach Parker is doing at Bryant High School (AR). Rather than blocking the Counter as a gap scheme, Coach Parker prefers to use sprint out blocking rules along his front. The illustrations below are how Coach Parker looks at a Counter play to the left (Diagrams 53-54). The line down blocks and works up to the number two linebacker in the box while someone always pulls to kick the end man on the line of scrimmage. To the front side, his rules are common and he follows the “gap, down, backer” moniker. But to the backside of the scheme, Coach Parker has his players block it like sprint protection instead of gap hinging. It meshes with sprint out protection which he uses a good deal of in his offenses. It maintains continuity up front. “When we gap hinge, I feel like if you try to cut the gap off, you give them the short edge where if they want to pin their ears back and chase you down on a slow developing play the can,” said Coach Parker. “The Mike can get to you and ruin the play. We force them to ‘run the hump’ more than anything else. Not everyone is going to get there.” 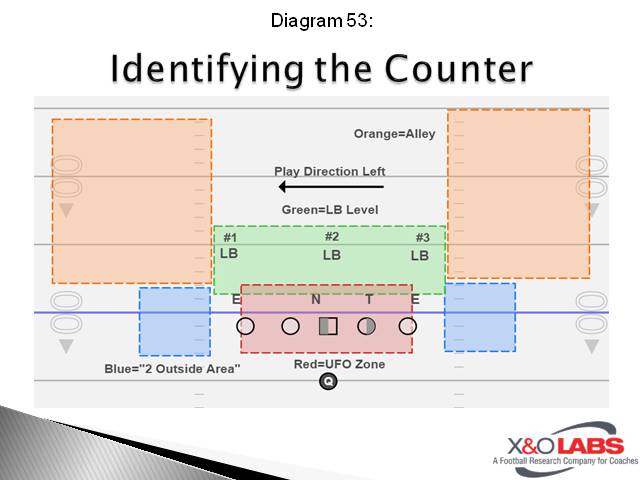 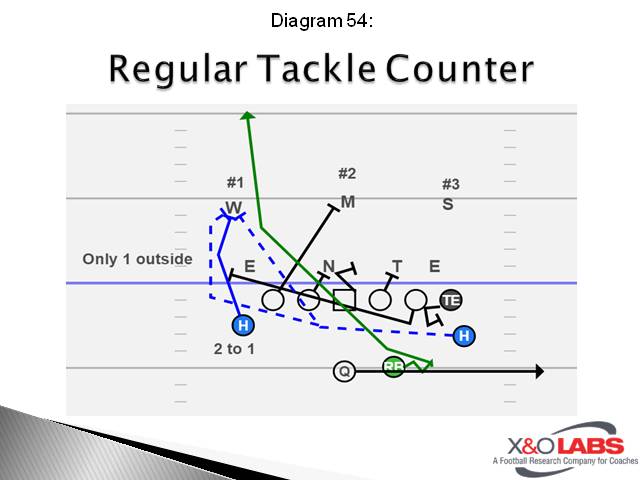 At Bryant, Coach Parker uses both a guard and tackle kicking the end man on the line of scrimmage. “Our guard kicking version netted more on our runs to our running backs,” said Coach Parker. “But I think the tackle kicking version works out better for our protection rules and for our Q draw scheme. There are advantages and disadvantages to different varieties of Counters. Your choice will largely be on what you’re trying to accomplish, defenses you face, and your personnel. Maybe our opponent that week reads guards and you could pull a linebacker off a route. Maybe the safeties read tackles and will bite down on the run. Depending on what we were trying to accomplish against our opponent, we used both versions. We called regular counter runs 8 to 10 times a game averaging about 8 yards a carry. We have to protect the effectiveness of that play.”

His line rules for Counter are gap, down, backer. The backside tackle pulls to kick the end man on the line of scrimmage. “Our line works to number two at linebacker level,” said Coach Parker. “Depending on whose gap is uncovered determines who works up. The key to us getting on the right guys is identifying where number two is. We also tell the lineman working up to number two, ‘if you have an angle for number one, you may get him but do not chase him out.’ This scenario comes up with 3-4/4-2-5 teams that play their backers tight over the guards. When in doubt, our linemen know they will always be right blocking number two.”