At the University of Rhode Island, offensive coordinator Pat Murphy has built his run game around what he calls “segment runs,” which essentially are divide runs, where the QB is asked to read any defender in any gap along the line of scrimmage. While many coaches have implemented some of these concepts- such as zone read, midline read, bash, etc.- Coach Murphy and his staff use all of them and will use them every week. He will ask his quarterback to read the B gap, A Gap, C gap, or D gap and will invert the read where the QB is the dive element, which allows for bigger QB’s to run in the box. He can do that is by building his run game around these particular defaults where each concept has a built-in read.

Take the following illustration as an example:

“Mid Zone”- A gap read to call side

“Outside Zone”- A gap read to the backside

It’s important to know that these reads can change based on the personnel and scheme of the defense, which is something we will detail later on in this report. Which divides Coach Murphy and his staff selects also depends on the skill set of the quarterback. But one thing is certain, using all of these read concepts as a primary element of your system allows quarterbacks who are not particularly great runners to be a threat in the run game. And with a signal-caller this season that is 230 pounds, Coach Murphy makes sure that he gets at least 10-12 carriers per game, particularly on interior runs, which is different than getting an edge or dealing with space outside. This year the URI quarterback finished with 408 yards on 113 carriers and in two seasons the Rams were undefeated when he rushes for over 30 yards a game.

The progression starts by deciding where he wants to divide the defense. While linemen have their rules based on the run concept, the divide gap is the read gap and cannot be blocked. How Coach Murphy and his staff formulates the read each week is what makes the system unique. “Essentially you're mixing tight zone with mid-zone on the same play and you can displace people fighting to stay in their gaps," he says. "It's not something defenders see regularly. Often there is no one in the divide but the actual read defender because they are getting tight zone action one way and stretched opposite.”

How Coach Murphy can bucket all these concepts is by creating a streamlined system of language that is broken down into both front side and backside reads and combined with the run concept. Any front side read is coupled with an “F” word, which tells the front side offensive line they are involved in the read side.

“Fate”- Front side A gap read

“Fiber”- Front side B gap read 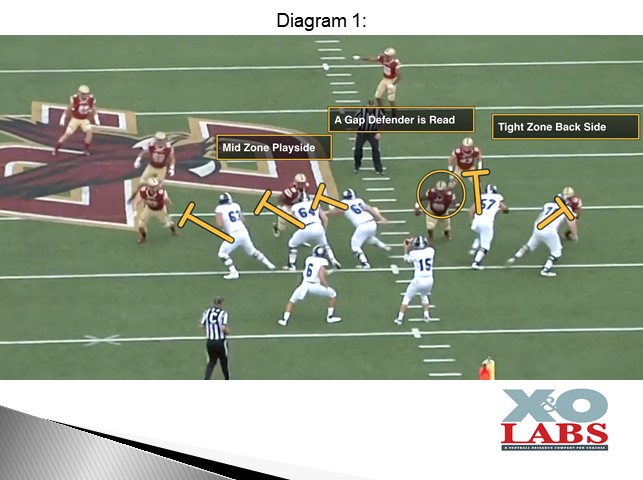 It's important not to get the big guys up front confused, so although Rhode Island is primarily a one-back outfit any "F" tag instructs the line to use two-back blocking, where the Center works backside away from the read.

Conversely, backside reads are labeled with “B” words such as “Bat” where the quarterback will read the first down lineman (either A or B gap defender) past the Center on the backside. This tells the Center to now work frontside. Against a 2i defender, the backside Guard blocks the B gap, the backside Tackle blocks the C gap, and the backside tight end blocks the D gap or can seal the safety. These can be coupled with any run concept (mid zone, tight zone, pin, pull, etc.). But as detailed below what makes these concepts lethal is the invert run action presented to a down defender where he is asked to make a real-time decision on playing the back or the QB with run action in his face right now. It's different than pure zone read where the back is working away from him. It completely negates any traditional surf technique by a down lineman. 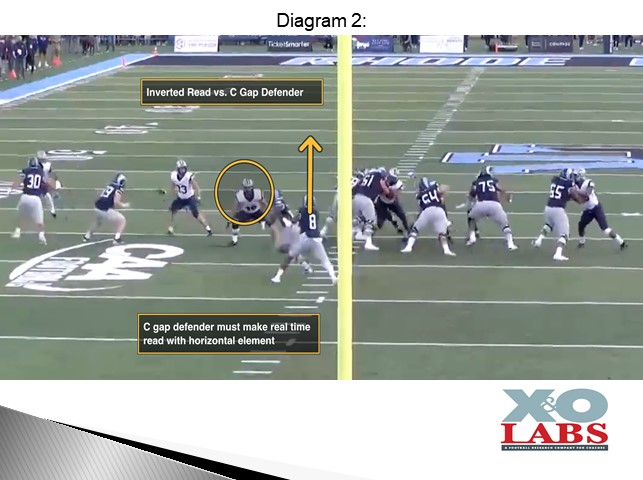 According to Coach Murphy, because the backside is man blocking it's important to teach the offensive line to be able to handle two-man and three-man games on the backside. They have to be able to work in space and block second-level defenders by using the same principles as a backside Tackle would on a traditional zone read by veering to a second-level defender. Coach Murphy calls it "V.C.C." which stands for Veer, Climb and Cover a second-level defender. At times it's important to let the defender declare, rather than try to decide which way he is working. “We talk about picking our inside foot up and putting it down to get a true determination of the best path to the linebacker,” he said.

Each of these reads is correlated with a particular mesh fundamental by the quarterback and running back. As defenses got smarter in being able to tip off backfield alignments, Coach Murphy went to a universal backfield alignment of having the running back always align in the B gap and always have his toes on the heels of the quarterback as to not tip off which concept is being run. Which mesh fundamental the QB and running back is based on the particular segment run. But it will always be one of the following:

“Clear” Mesh- Here the quarterback will step back and replace his heels with his toes moving from near leg to far leg to seat the mesh. The coaching point is to have feet slightly wider than his armpits so he can come downhill down the hash. These are used in mid-zone reads, and wrong way runs where the QB is reading a backside B gap or C gap defender. 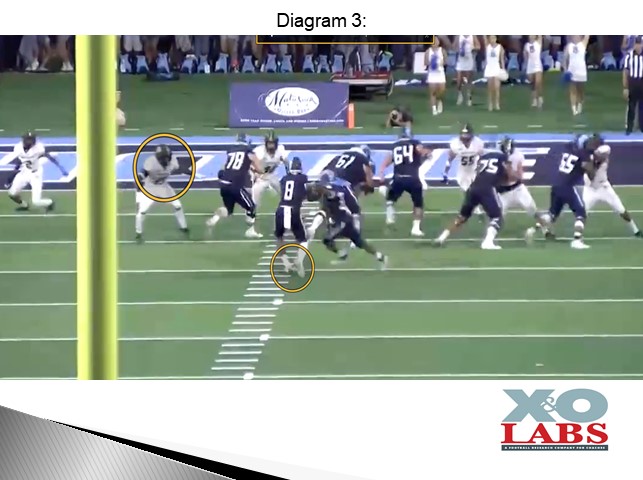 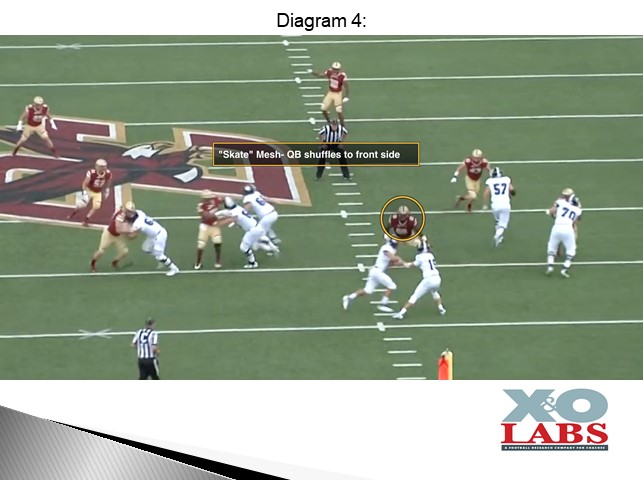 “Pivot” Mesh- Here the quarterback will pivot on his play side foot with a short six-inch step with opposite foot in a staggered stance. He will ride the ball from near hip to far hip before making a decision. These are used in interior runs like veer, power, and counter.

As far as making the right decision on gives or pulls, Coach Murphy classifies a give or pull in a simple formula:

“On or In= Out”- This means that if the read defender is on or inside the line of scrimmage the ball should go outside to the running back. 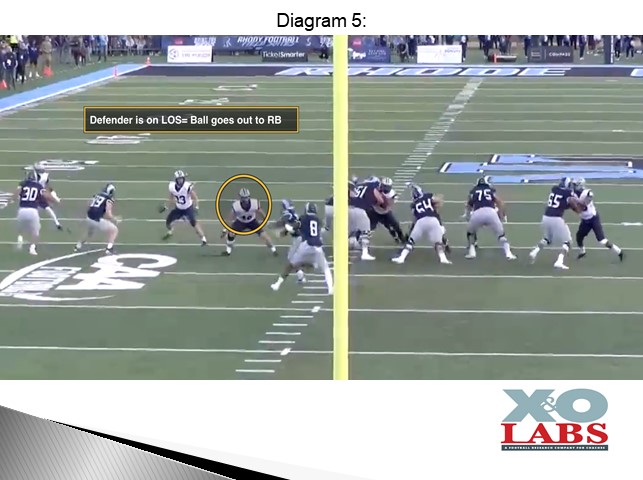 “Upfield or Outside= In”- This means that if the read defender is upfield or outside the line of scrimmage the ball should go inside to the quarterback. 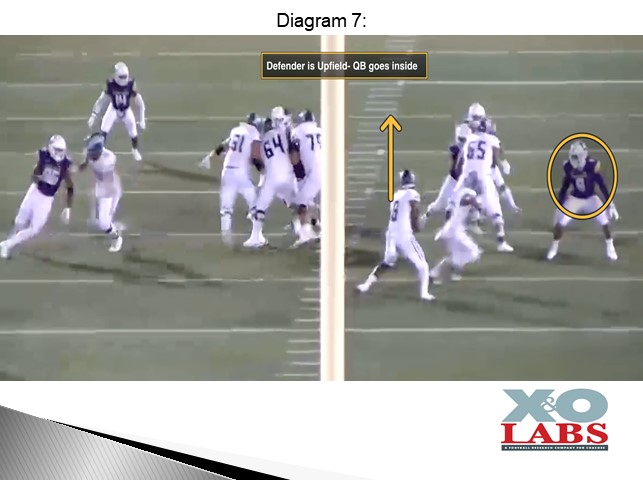 The rest of this report focuses solely on how Coach Murphy and his staff piece together these segments runs weekly to manipulate defensive schemes and personnel.