There is a contingent of coaches that prefer to take the guesswork completely out of their quarterback’s hands by alleviating him from making any post-snap reads. These are the coaches that just want their best runner, who happens to be the quarterback, running the football with no hesitation. In this case, we report on the various ways in which coaches are designing formations and blocking variations to make sure their quarterback carries the football. And despite what the film may look like with flash fakes, there are no reads on this scheme, which means the offense has to block ten defenders. The beauty in this presentation is we report how offenses are able to gain numbers on defenses by blocking with ten. Our research is segmented on how these formations and blocking adjustments alleviate the potential of extra run fitters without using option or RPO’s as an alternative. This is a no RPO zone.

The designed quarterback run concepts researched in this case include:


For each of these concepts, we provide the following reasoning:

The quarterback power concept continues to be a mainstay in offensive systems throughout the country. It’s hard to ignore the success FBS programs like the University of Texas have had with Sam Ehlinger running power schemes. It’s a simple play that can account for six box defenders with the running back as the lead blocker. While some coaches have expressed their hesitation in having an A back type be forced to block a C gap defender, as he would have to in traditional power, others have found ways to alleviate this player from having to handle that job responsibility.

At Catholic High School, a prep powerhouse in Baton Rouge, run game coordinator Sanders Davis will sub in heavier personnel such as a fullback, tight end (or A back that can block) to run quarterback power. We were extremely impressed with the quarterback run catalog at Catholic, who will virtually run any one back concept in the offensive menu. So, Coach Davis wanted to keep the downhill element of power but wanted to be able to block seven box defenders in 4-3 schemes. So, his answer was to use a double sniffer concept, where one sniffer would block the play side C gap. The other sniffer would cut off the backside C gap defender. This allowed the backside Tackle to chase the backside linebacker in the box. This can be accomplished by just making a simple tag to the concept. 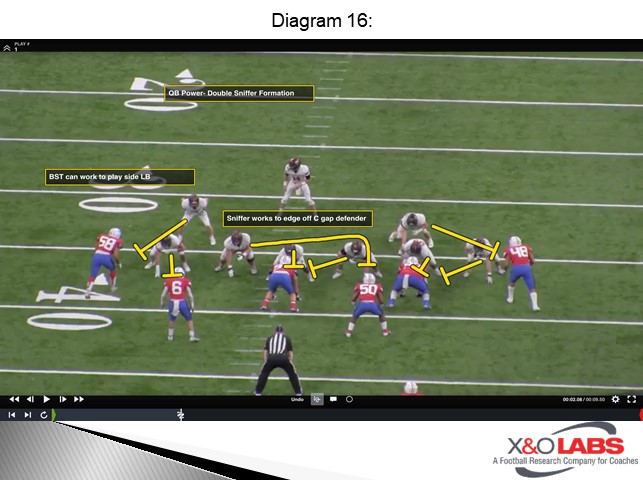 According to Coach Sanders, this concept gave him a lot of variety against Bear and heavy fronts and also provided some manipulation on how to block linebackers. “We were able handle the defensive end with the sniffer and we can have double teams with linemen,” said Coach Sanders. “It was originally an adjustment against 4-3 teams where we can’t get to backside linebacker. So, the sniffer came in to block the defensive end to get a seven on seven matchup. The tackle can get to the backside linebacker and we get a hat on a hat. Blocking the backside defensive end is not a huge block, we just need to slow him down. The Tackle needs to work to linebacker who can flow over the top and make the tackle on gap schemes.”