The gap run scheme has constantly evolved from the Wing-T days and Robust T days of my early coaching years. It is hard to watch a game on Friday night, Saturday or Sunday and not see several gap scheme runs. The concept of building a wall inside, kicking someone out and leading a blocker through the hole lives today just like it does on the classic Vince Lombardi film explaining the "Packer Sweep". One key difference offenses face today is the multitude of line stunts and second level blitzes designed to attack the running game.

At Capital, in the Ohio Athletic Conference, we face more pressures on run downs than we consistently see on passing downs. As we build a running package each week, we must make sure that it can account for the pressures we will see that week. We start by examining the common fronts used by our opponent. We like to know the alignments and favored techniques of the down linemen and the alignment and reads of the linebackers. We need to understand what is "normal" from this front. From there we will examine their pressure package used to stop the run game. Do they do this out of the normal front or do they align differently to get it done? We see both situations. Obviously, if we can see a key for a stunt or pressure via an alignment key, it helps us. In this report, I will walk you through some of our adjustments used to handle the various combinations of “A-gap" pressures used to stop our Gap Scheme Runs.

Our base rule on the play side is "Gap-Down-Backer". Simple as it may seem, this rule has held true for my four decades of coaching. Gap is defined as a down defender aligned between my nose and the near shoulder of my inside partner on the play side. A player in the "gap" will be tough for my inside partner to assist with blocking. He would have to step outside while his responsibilities are inside. "Down", for us, runs from the inside V of the neck on my inside partner to the tip of my partner's near shoulder. Here, we could receive help on a combo block used to move a down lineman. "Backer" comes into play when there is no down man in my Gap or Down rules.

Using these guidelines, an offensive line could block most any look presented to it on the play side. 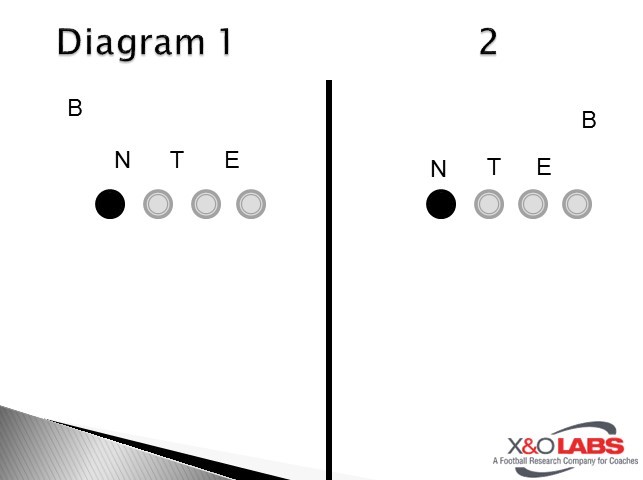 The Tackle has no one in his Gap or Down rule. To get to his "Backer" he will work a track through the rear of the Nose to pick off a loop move which would be difficult for his Guard to get. Refer to Diagram 3.  On the backside we will pull one or two of the lineman and we must control pinching movements which threaten our run from the inside-out. We are not set on who we pull for our gap plays. If it makes sense to pull the Center instead of the Backside Guard, we will. There are times when it makes sense to pull the Backside Tackle instead of the Guard or the Center. The key is for the three of them to know who should pull and why that pull takes preference. On Counter, we will pull the Center and the Tackle, the Guard and the Tackle, the Center and the TE/H-Back, the Guard and the TE/H-Back, the Center and the RB or the Guard and the RB. Once we determine the most dangerous pressures, we will select the pulling schemes. 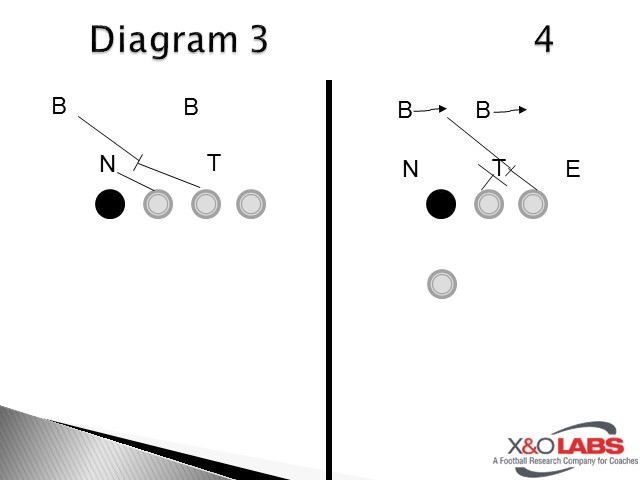 Handling A Gap Threats in Base Fronts

Now, let’s look at some of the common fronts and I will explain how we handle the "A-gap" threats that we see. We will run our gap scheme runs to a Tight End or to an open side. From here on, I will focus on the schemes from the FST (front side Tackle) back. Let's start with the common 4-2 front with the Tackle aligned on the outside shoulder of the Guard.

The Nose is aligned on the inside shoulder of the backside Guard. Both linebackers are in the box and in their normal alignments. The hardest block here would be the block of the FST. If the FSG (front side Guard) worked inside for the backside linebacker immediately, a pinch move into the "A-gap" would be difficult to stop by the FST. We would want to combo the block the tackle to the BSLB. Through film study, we want to know how the inside linebackers flow when they read down and pull action. If they are going to flow along on level two, we will have the FST use his hard angle footwork inside to knock the Tackle to the FSG. The FST will climb on he feels the FSG taking control of the block. The FSG will step vertically with his inside foot first and then step through the crotch of the defender with his second step. His eyes are in "A-gap" looking for a run through, but his hands are prepared to grasp the defender as the FST knocks him inside. Once the block on the defender begins, we want breast plate hand placement and our eyes on the outside V of the neck on the man. Again Refer to above Diagram 4.

The FST will lead step inside with the high knee aiming for the near armpit. The backside knee will aim for the near hip of the defender. We are coming with power moving him inside to the FSG.

If in our film study, we see that either of the inside backers will fill through "A-gap" on a regular basis through blitz or by running through an open window, we will alter the combo block. The FSG must be able to help on the down man but he must stop any penetration through his gap. His footwork does not change. He will lead with his inside foot and use a shortened step. He will still place his second step into the defender. To help the FST, we will use a shoulder and flipper to distort the defender's momentum. Our eyes are still focused on the near linebacker to the backside linebacker. The FSG must be able to stay as long as possible and disengage when necessary to stop penetration inside. The FST will now use his slide base footwork. We will execute two quick lateral steps inside to gain position and they execute our angle drive block footwork. The third step would angle across and the fourth is the "through’ step into the man. The FST has to be able to react to a pinch move by the defender. The combo becomes a delayed version of the first one explained. The FSG's rule is "Backer". His primary gap is the "A-gap. He will help the FST until his assignment is threatened.