Coaching the Third and Fourth Puller in Multiple Gap Concepts

For the last 5 or 6 seasons, our run game has morphed from predominately zone schemes to nearly all gap schemes. This started as we were facing multiple fronts and the team we knew we would have to beat was doing very different things on defense. Standing everyone up, blitzing 4 to one side, walking the entire defense around pre-snap, lining up the entire defense at 5 yards, etc., etc. So as a response to this we started "blocking down and kicking out" more. We feel that with a block-down kick-out mentality we can block more fronts without changing many rules for the kids. Initially, we were getting to this look with split zone schemes. We decided that if “pulling” one player and moving a gap was good, maybe pulling two would be better. We installed G/Y Counter first and soon after G/T counter. By this season we have been running our counter schemes for a few years and the kids have a good understanding of our play design. With the idea that pulling one was good and pulling two was better, we asked ourselves “what if we pull 3?” So, during the 2021 season, we added a tag to our counter schemes that would allow for us to add a third puller. 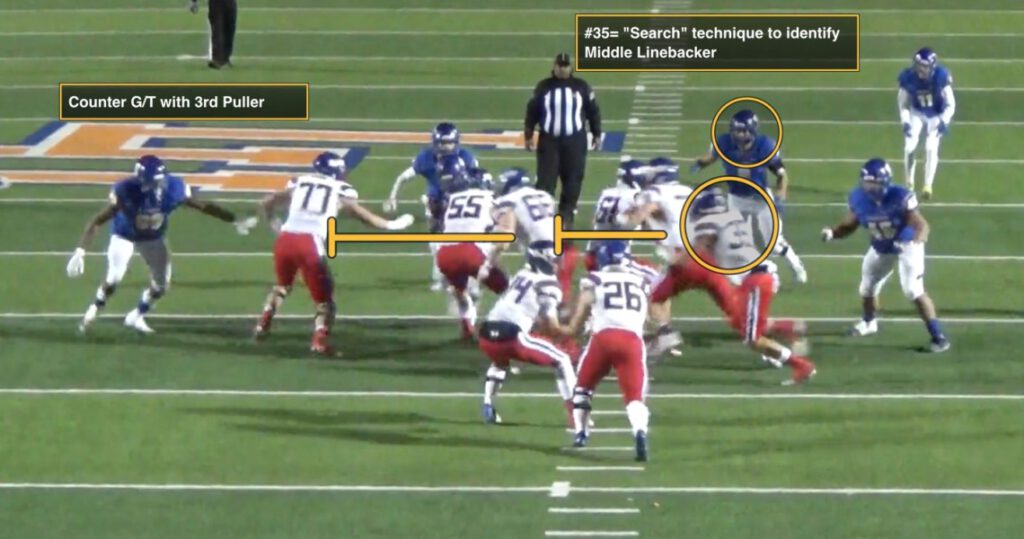 The following coaching points are for our Counter plays. We run counter a variety of ways and in doing so teach it as a “First Puller”, “Second Puller” and at times a “Third Puller” play. The ability to run this scheme against any front as well as a tempo play are big reasons we like these counter schemes.

QB: In our offense, our gap scheme runs can be both QB read to run options or QB read to throw RPO options. It depends on how we call the play. The play call will alert the QB as to how we will be blocking the scheme and how he will be reading the play. In this write up we won't go into the details of our QB reads.

Center: block back on the first backside lineman. the first step is lateral step aiming at the outside foot of his target. the second step is aiming at the near foot to protect against an inside slant. Head in front to stop penetration, near hand far chest plate with heavy backside hand to force the target out and up the field.

Frontside First Block Down: Declares kick target for the first puller via code word, if he has an inside threat in an odd front he will use IZ steps to block down if the lineman slants out he will bypass the end and climb to the first backer in his path. If he has no inside threat he will slow play and take a 6-inch step checking the kick target for an inside slant, if he stays outside he will climb, if he plays inside he will pull him across and the kick target becomes the next outside player. In an even front, he will take power combo steps with the covered lineman to the backside linebacker.

Frontside Second Block Down: block back/down in an odd front on the first inside lineman. the first step is lateral step aiming at the outside foot of his target. the second step is aiming at the near foot to protect against a play side slant. Head in front to stop penetration, near hand far chest plate with heavy backside hand to force the target out and up the field. In an even front, he will take power combo steps with the play-side uncovered lineman to the backside linebacker.

Backside First Puller: Trap pull: The first step opens his hips and squaring his shoulders to the kick target, the second step clears the center and gets the puller into the line of scrimmage to handle a kick or log scenario. The aiming point is the inside shoulder of the target, head in front, heavy upfield hand, working his hips upfield on contact forcing the defender up the field.

Backside Second Puller: Square pull: The first step is a back step that gains depth and stacks behind the inside foot. the second step is a lateral step into a crossover run keeping his shoulders square to insert vertically on the play side backer. His aiming point is head up if the LB plays heads up or backside he will get a vertical push and pin him inside, if he plays over top he will treat it as a second kick aiming point becomes the same as the first puller.

Backside Third Puller: We treat our third puller as the "extra" guy. We coach them up on who could be the unblocked defender, but we also want them to understand they are a cleanup block. As they are pulling we coach an "eyes inside" approach and if nothing shows find the near safety. This year we had three senior tight ends, so we would go into who we expected to be the extra defender for the 3rd puller. Oftentimes it is the backside inside LB, but you would be surprised how often they get caught in the trash of the down blocks. So we teach him eyes inside so he is looking for that defender, but if no one shows he knows he can work up to safety. He also knows that he is the clean-up guy, if we miss a block somewhere he should help fix it.

Backside Fourth Puller: On the few occasions we pulled a fourth player, we just stressed that he was the extra guy, have eyes inside and clean up any unblocked defenders you find. if nothing shows he is to look outside for a folding defender.

The rest of this report focuses solely on how Coach Schnieder and the offensive staff teaches the third and fourth puller to identify and block extra run fitters in gap schemes.