Baldwin-Wallace One Back Power Concept

First off, I would like to thank X&O Labs for giving me the opportunity to contribute to its website. I would also like to give credit to our offensive line coach Mark Jochum who has devised a lot of the coaching points I will discuss in this piece. In 2010, we implemented a power running game that tied into what we are doing with our zone running game.  For us, the two concepts relate in both a philosophical and technical manner.  We define our one or two back power as a physically gap-blocked play designed to attack the A-gap out.  It is used to create angles and displace gaps versus penetrating situations.

Like our inside zone play, our one back power is an aggressive and physical play that has several similarities.  First, both schemes have the offensive line going in one direction.  Just like zone, everyone is responsible for a gap.  In our zone concept, everyone blocks their play side gap.  In our power concept, it works opposite with all linemen responsible for their backside gap with one player kicking out.  Additionally, both use combination blocks.  In our run game we want to find as many double teams as possible.  With our inside zone we can have up to two double teams, and Power gives us a double team at the Point of Attack.

Because we have similarities between the two concepts, our run game allows us to emphasize the execution of fundamentals and techniques.  For example, what we call a "Backside B" technique on zone play is very similar to our "Deuce Block" on the power play.  We can work that single technique in a drill.

From a strategic standpoint, both our zone and power concepts are flexible schemes.   Both can be run from multiple formations.   These runs provide a balanced attack which can run to both the tight end and split end sides.  The rules of our concept are very similar with one back or two back power.  Both hit in the A-gap with someone responsible for the Sam linebacker.  In two schemes, that back would be the fullback.  In one back schemes we remove him by positioning a receiver outside the box and forcing the defense to cover down on that receiver.  Furthermore, the schemes adapt to the different types of defense that we may see, whether they prefer a penetrating, reading, or pressuring style.

When running the power scheme there are three main keys that must be accomplished to be effective:

Key #1:  Gaps always override people (Diagram 1).  Because we are always gap responsible first, this is a sound scheme versus defensive line movement and blitzes. 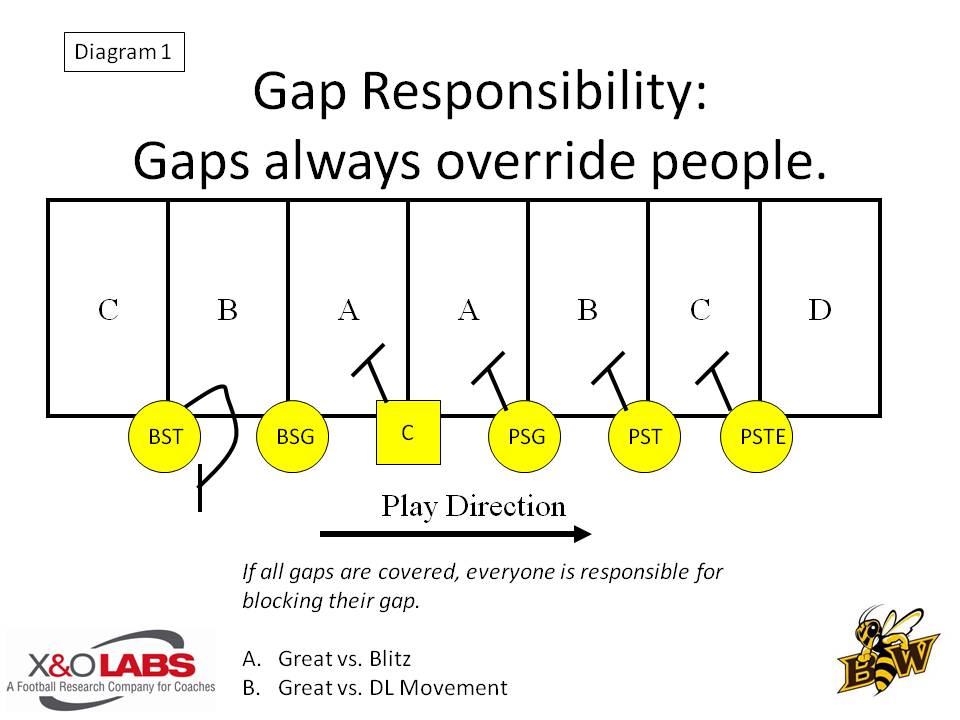 Key#2:  We create favorable blocking angles by declaring the LB that we will kick out (Diagrams 2-4). 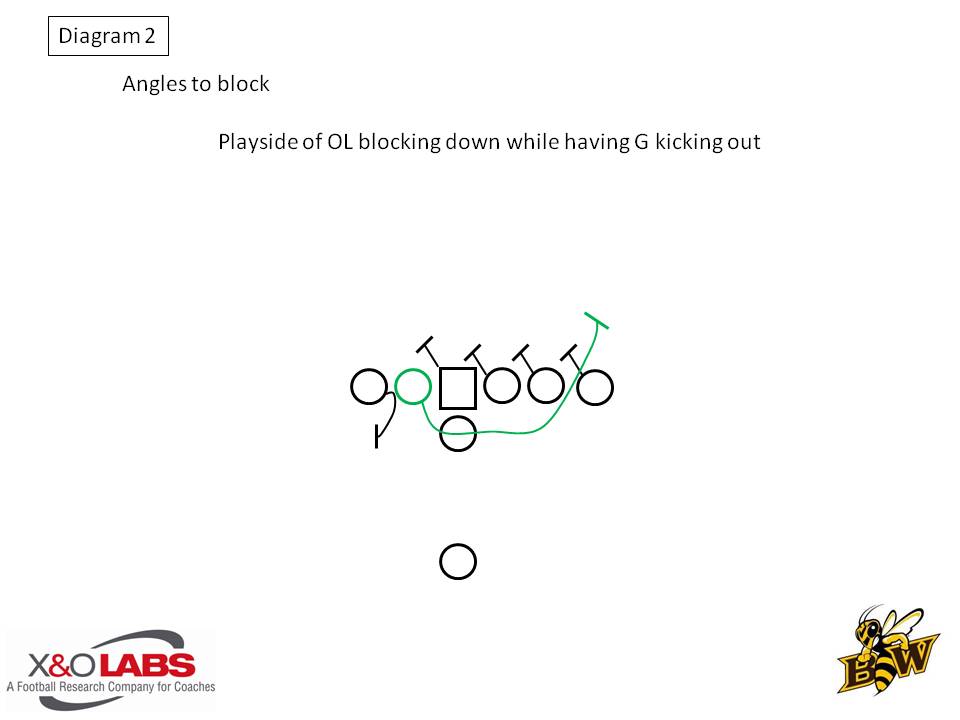 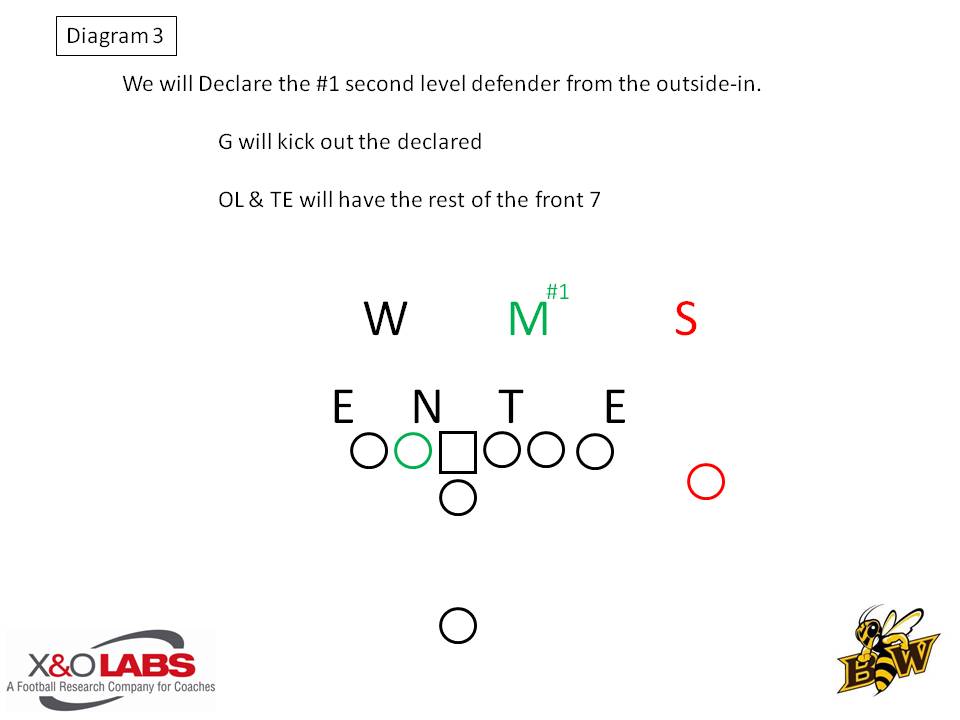 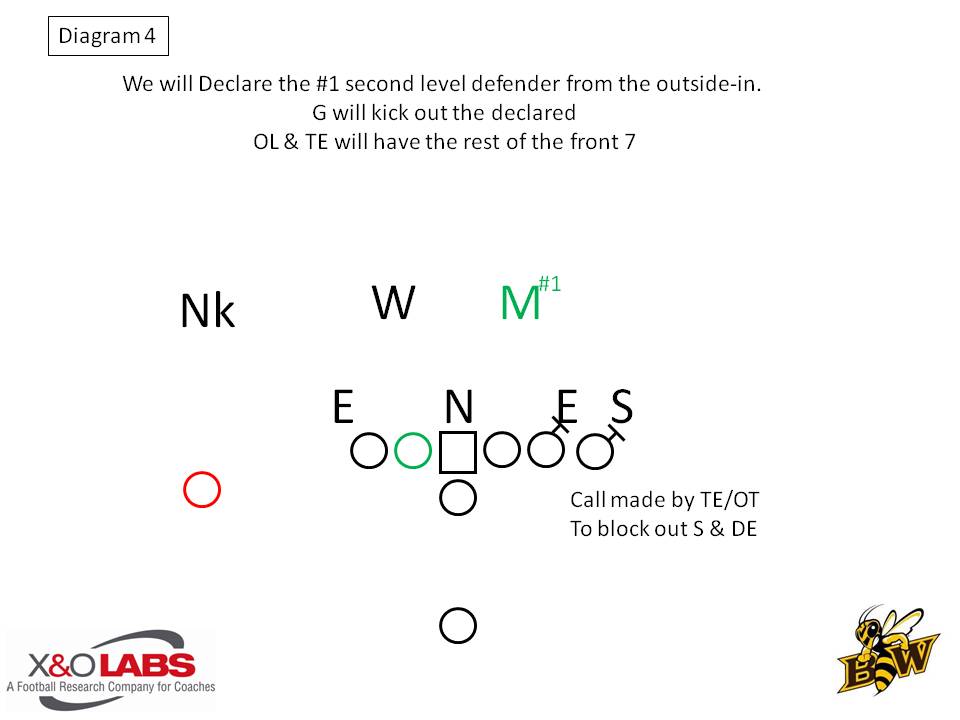 Key #3:  We look to create a double team or combo block at the point of attack (Diagram 5). 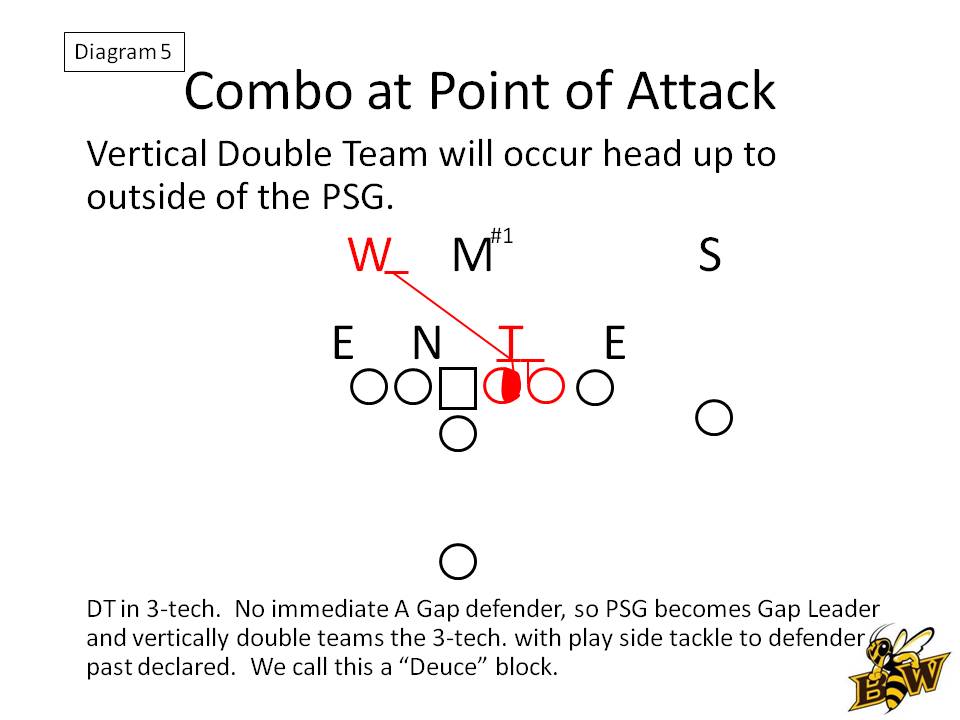 Our blocking assignments and techniques for all linemen and backs are as follows:

Description:  This player could be a play side guard against a 3-technique defensive tackle. We prefer to run it to a 3-technique, because the play hits tighter and gets downhill quicker.  He is responsible for posting the down lineman to his outside gap.  The objective is to get vertical displacement at the point of attack the work to backside linebacker past declared.  He is still responsible for his inside gap.

Landmark:  Inside number of down defender

Contact:  Lazy forearm with outside arm (See Image "Combo at Point of Attack1") 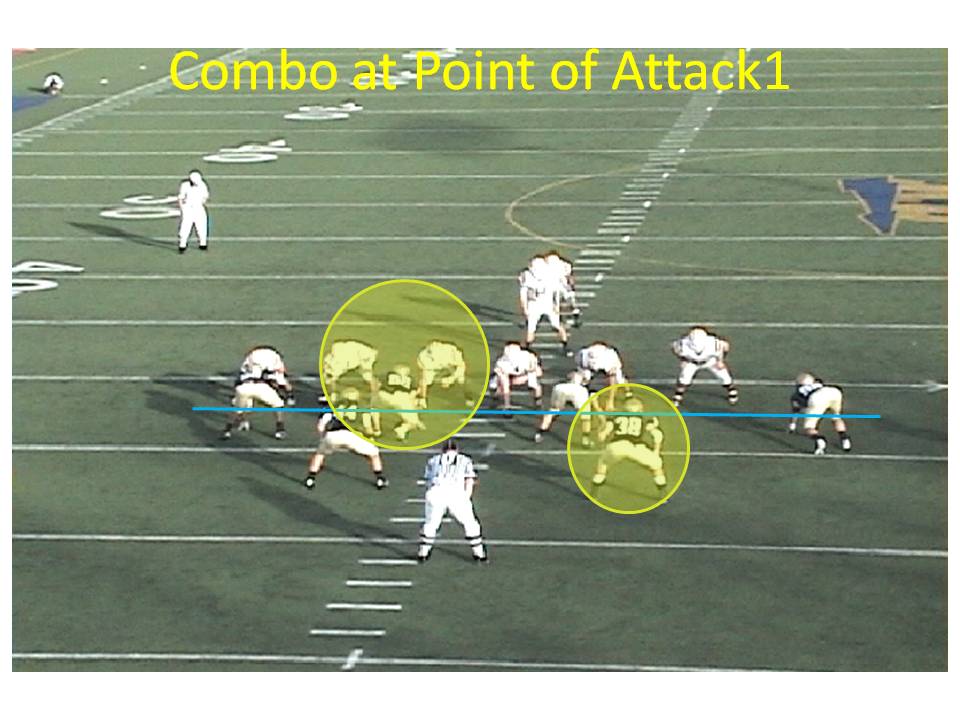 Follow-thru:  Play side foot thru the crotch and backside foot lags behind.  Strain defender off you which will bring your hips underneath you.

Finish:  Push off play side foot and get off to BSLB past declared. Drive on vertical line; don't get off until he comes to us.  Aiming point is the backside number with a double under punch.  In the double under punch we get our hips and our hands involved.  Can't have hips behind.

Description:  This refers to a play side tackle in the one-back power play. Drive a defender in the inside gap vertically with the Post Man.  The objective is to get vertical displacement at the point of attack.  The only time we will come off is if the down lineman plays into the inside gap of the post man.