The Power football play is one that has been a huge part of the game for a long time. Power has been and continues to be run no matter the style of offense you play, from spread teams to teams that play mostly out of heavy sets. In my first season on staff here at the University of Arkansas at Monticello, we added over 90 yards rushing per game to what they averaged the year before. A large part of that was our emphasis on gap scheme runs, and specifically two back power. Now I'm not saying Power, or even gap scheme plays, is the only play you should run, but I think that our emphasis on gap scheme runs played a large part in our kids having a better understanding of how running game works. This year we were over 70 percent efficient on two back power. We chart efficient plays in a very in-depth way. We consider the play efficient if on 1st and 10 if we gain 4 or more yards, on 2nd down if we gain half or more of what we have left to gain, or on 3rd or 4th down gaining all of the line to gain. In this article, we will dive into 2 back power from different sets and the RPOs that go with it schematically. 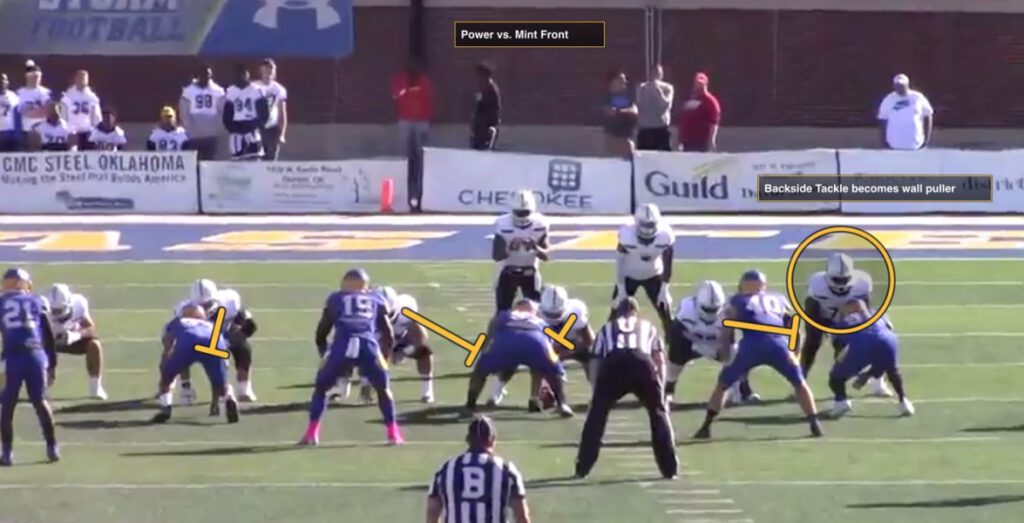 We run power most of the time out of 11 personnel out of formations with the tight end in the “sniffer” or fullback position. We align the tight end in a position where he splits the inside leg of the offensive tackle. This is advantageous to the power play in the way that allows for the tight end to be in a position inside of the defensive end he is to kick out. That tight end is to take a step with his inside foot first vertical and insert as tight as he can to the down blocking tackle. We like the play out of the sniffer position more than out of inline tight end formations because the tight end is always inside the end in the sniffer position, and when the tight end is in line there are three different alignments he can get, causing for more thinking on his part. We try to eliminate as much thinking as possible, especially for the offensive line and tight ends in the blocking schemes. The base way we teach the play is with the play side guard and tackle double team the 3 technique to the backside linebacker, center blocking back on the first down lineman backside, backside guard pulls for the first linebacker in the box play side, and the backside tackle steps down protecting B gap to C gap. The biggest thing that is a little bit different for us regarding our play side double team to backside linebacker. If the back-side linebacker tries to flow over the top instead of beating our head against the wall trying to pin his backside, we use what we call the wheel technique. What this means is as he tries to come over the top, we become strong with our inside hand and use his and run him to the play side. The back-side linebacker will now be run past the gap, and the ball will cut back behind the back-sided linebacker.