Over 60 percent of the Ferris State offensive system is derived from 10 personnel groupings. This means that it operates from either 2x2 open sets or 3x1 open sets much of the time. And when you add the presence of the quarterback run game it becomes impossible for a defense to match hats in the box without playing some form of man coverage. That’s where the Rip/Liz motion commonly used in Ferris State’s system truly separates a defense. While Ferris State does see a good deal of pure cover zero, it often results in a significant chunk of plays due to the athleticism it has on the perimeter.

So, while the offensive staff, under the direction of offensive coordinator Steve Annese, spends a great deal of time analyzing how defenses will align to these two formations, they have made a conscious choice to run their quarterback early and often. Now, granted the staff can recruit to that player and they do with a great deal of success. But like most offensive staffs, the goal is to design a quarterback run/RPO system that lightens boxes, takes cultivates easy throws, and alleviates direct hits on the most important player on the field. 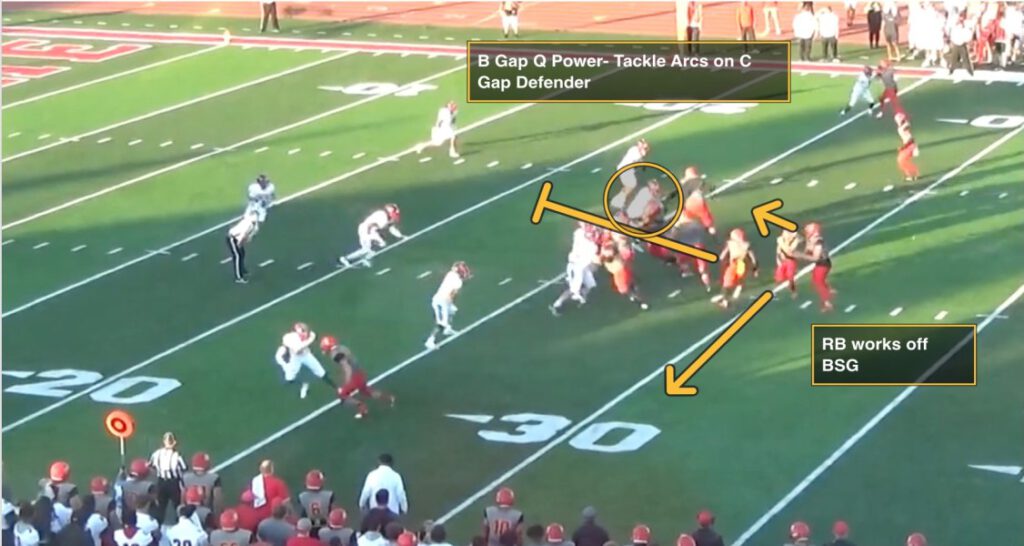 The Ferris State offensive line is among the biggest in the country at the Division 2 level, averaging over 300 pounds upfront. What is unique about this unit is that positions are interchangeable, including the Center. Offensive line coach/run game coordinator Sam Parker will continually prep up to ten linemen during a season. Much of that success is accredited to his simple, and universal teaching methodology. He doesn’t teach a point system in any of his run concepts. Instead, Bulldog offensive linemen are taught to "spot" block both on zone and gap runs. He says it helps in alleviating the confusion that may be caused when the continual motion it the Ferris State system takes the defender in and out of the run box. More on that later.

The success of the Bulldog run game perpetuated the advancement of these RPO attachments this past season. It helped in getting the ball on the perimeter to the speedier skill set of receivers. As Coach Parker told me, "defenses do us a favor sometimes by loading the box." Because of this, a premium is placed on blocking scenarios, particularly in the front side of gap schemes. The six-box runs that populate the Bulldogs package consist of play-side man blocking at the point of attack. The success rate of those plays relies on these bigger, athletic tackles to handle the C gap defender. “Tackles cannot allow defensive ends to beat us across our face,” said Coach Parker. “If you have C gap players swiping in across your face it’s not negotiable. You can’t run gap schemes for us here.

How Coach Parker trains those individual man blocks are through his board progression drill below. It consists of the following progression:

In this offense, it all starts with the quarterback. A multi-talented threat that drives this entire system, the quarterback has been the continual lynchpin in head coach Tony Annese's system. There has only been one season over the last decade when the quarterback has not both rushed and passed for over 1,000 yards. This past season the Bulldog signal-caller had 38 rushing touchdowns, the most in Coach Annese's tenure. He also had 52 more carriers than anyone else in the program. 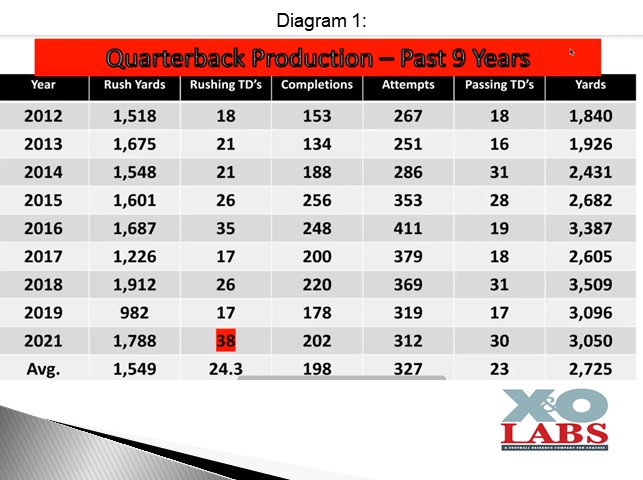 At the running back spot, Ferris State strives to recruit one within the 200-210 pound range, one that is durable enough to get over 100 carriers a season. “We don’t need a speed dude,” Coach Parker told me. “We usually have a balanced back.” That balance doesn’t consist of running and receiving. Instead, it’s about running and blocking which the back is required to do in all of the Bulldogs quarterback run schemes.

Ferris State doesn’t rotate its receivers. Instead, it plays with a right slot, left slot, boundary receiver, and field receiver. Altogether, they accumulated over 3,000 yards receiving and over 600 yards rushing. 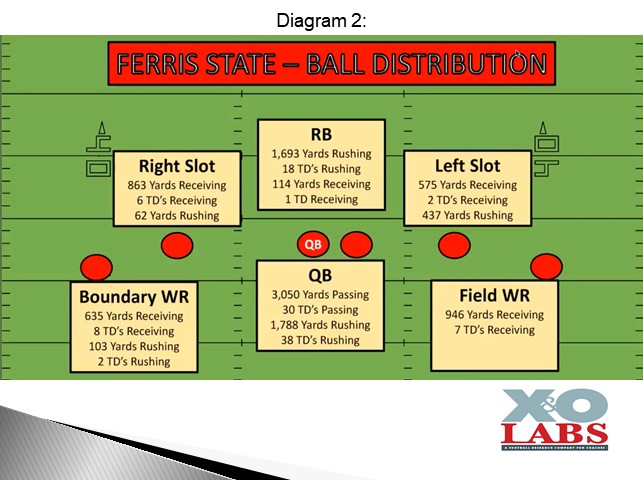 It’s a diverse grouping that uses deception in many ways often asked to be both ball carriers and decoys on jet motions as well as block on the perimeter. One of the many things that impressed me when studying this offense is the willingness of those receivers to stick their “face in the fan” so to speak and block the edge. It’s completely contradictory to the current personality of receivers in some spread systems today. In fact, their blocking rules are simple and translate into much of the run game in the entire system. Those blocking rules are below: 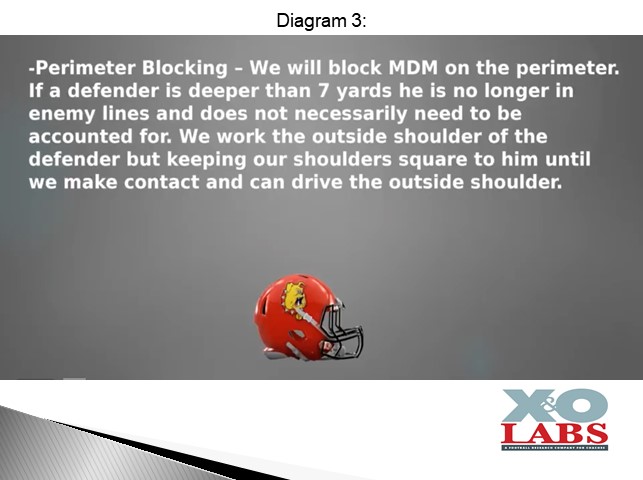 Before moving forward, if you’re going to major in quarterback runs, you’d better spend some time teaching the offensive line and running backs whom to block. This is why Coach Parker and running backs coach John Smith will spend ten minutes every day working through a half-line progression together. With two groups going at the same time, it's a low-impact drill where both the line and backs are taught to block all the various fronts Ferris State encounters each week. “We’ll get up to 50 plays during this period,” he told me. “Sometimes it’s easy for running backs to be physical, but in this system, they have to know who to block. This is the drill we use to teach them how to do so.”

Ferris State is a tempo outfit so it becomes necessary to group plays into packages. Although it does use one-word calls, much of the verbiage is broken down into the following signal progression:

Motion, like jet motion, is a simple component. Ferris State uses two words (“Rip”or “Liz”) to denote right or left which tells which receiver is running it. The play-action component is used to classify whether that receiver is running a jet read concept where he can be a viable ball carrier or if he's simply jetting across the formation to be a bubble screen element in horizontal screen concepts. There is tags built-in where he will be asked to motion across and block the box like he would in pure quarterback power schemes.

Like most offenses, run concepts are separated by families in the Bulldogs system such as tight runs, gaps, and sweeps. Taking "sweeps" as an example- because so much of the Bulldog's offense is based on perimeter concepts like bubbles and jet sweeps- the offensive line is taught on these schemes to secure the defender over them. If there is no one over them, they are told to block the defender two gaps over. The intention is understood they will never actually get there, but the mentality capture the box two gaps over at the second level. Of course, this is the starting point, but because of the continual motion used on 35% of snaps, there has to be a good deal of verbiage to let players know who the ball carrier is. This is done by a series of tags: “Q” or QB, “T” for running back, etc.

Call Side vs. Run Side: 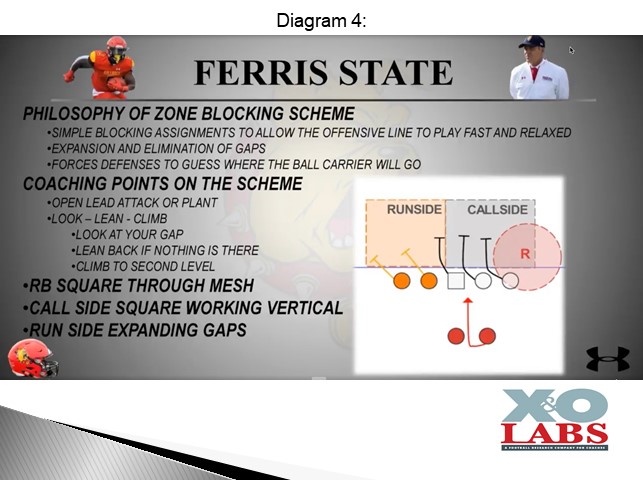 “We build it that way because we will read the backside of G/T counter, but read the front side of power in our power read scheme,” said Coach Parker. “The back and the offensive line has to know which side is the call side and which is the run side.”