Man blocking schemes are the easiest for coaches to teach and for linemen, and backs to learn. All they need to do is be able to count. Man schemes also allow for the most accountability, if there is a breakdown a coach and the player should know where it occurred. There are some combination blocks associated with a man scheme; but for the most part, one offensive player is responsible for blocking one defender. The man scheme also allows the coach to tell the running back, with a high level of certainty, where the hole is going to be.

As discussed in Part 1: Grouping Plays into Concepts and Matching Corresponding Footwork, we will utilize 5 Run Steps:

In the Man scheme, Guards are responsible for #1 on the line of scrimmage (LOS), the Defensive Tackles(Diagram 1). 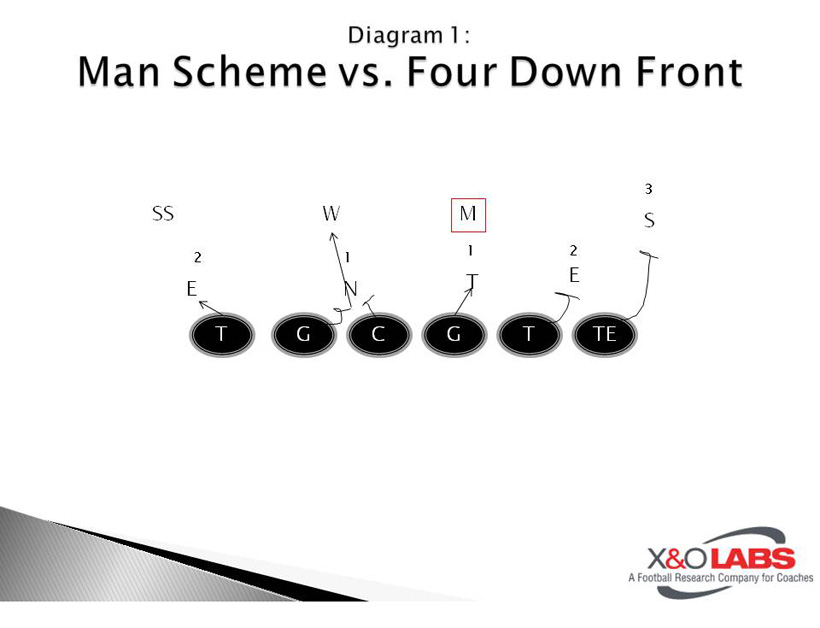 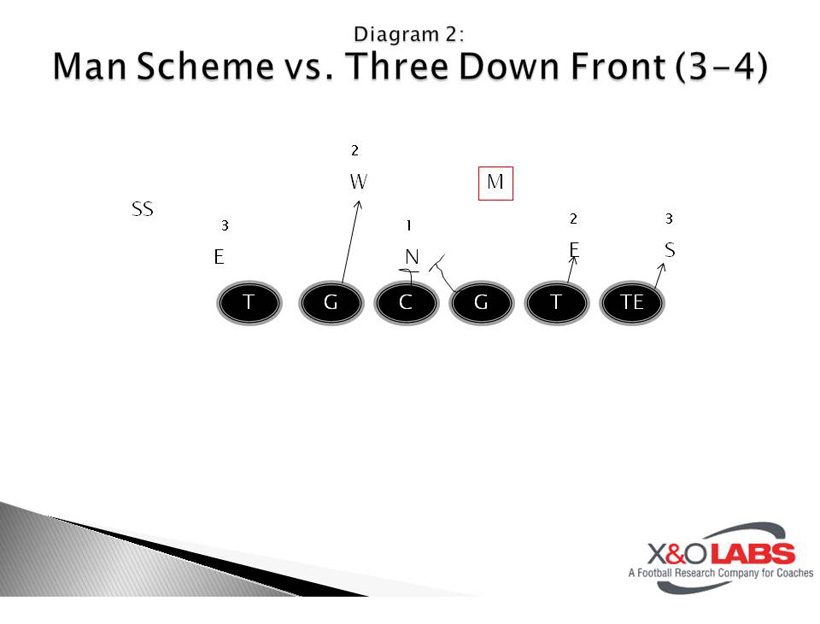 Versus a 3-3, the playside Guard and Center combo the Nose Guard to the Middle LB. The back-side Guard can combo the Nose Guard but will be responsible for the back-side OLB stacked on the DE at the edge of the box (Diagram 3). Tackles are responsible for #2 on the LOS, the Defensive Ends. The Center is responsible for the Middle Linebacker (in a 4-3 or 3-3) or the back-side Inside Linebacker (4-4, 3-4) vs. a two Inside Linebacker front and must call the combo with the appropriate Guard when he is covered. If the offense utilizes a Tight End, he blocks #3 on the LOS or a walk-up Linebacker. If there is no #3 on the LOS, he arc releases to block the alley defender. The alley defender could be an outside linebacker, a safety or a rolled Corner to a nub tight end. The first Linebacker to the playside is blocked by a lead back. 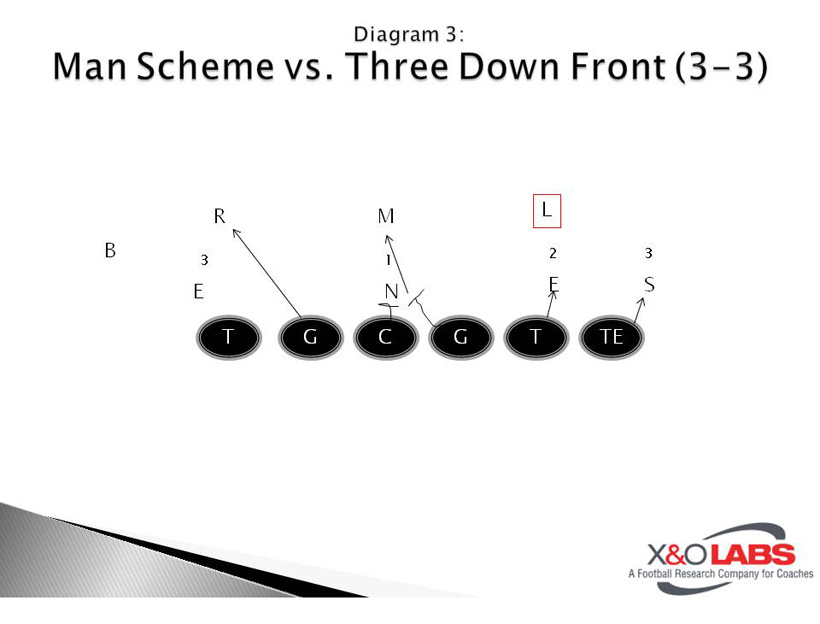 This report will address three common running plays that are associated with the Man Scheme. They are:

Counter is sometimes referred to as Tackle Trap. These three running plays can be utilized by almost every style of offense.

Let's begin with the Iso play. To avoid the big collision of lead back on Linebacker, it is best to run the play through the B-gap (between the Guard and Tackle). A good Linebacker may get a split read from the Guard and Tackle and fill the gap, but he will not have a direct path to collision the lead back as he would if the play were run to the A-gap (between the Center and Guard). Now let's address the big guys up front and start with the playside Guard's block on #1. If the DT is aligned in a 1-tech (inside shoulder of Guard), the playside Guard will take a Base step with his outside foot (Diagram 4). This step insures that the defender does not beat him on a slant to the B-gap. He should NEVER step with the near foot to the defender when he already has positional leverage to the hole. The visual aiming point for the Guard is the outside bottom of the defenders facemask. That aiming point allows the Guard to maintain horizontal leverage to the hole and vertical leverage on the defender (under his pad level).