Some runs work particularly well against different fronts. We all know this as coaches. But there are some coaches who put a premium on which run concept they are calling based off the front that they are seeing. We’ve found that in general terms, coordinators who plan against even front structures are more susceptible to call gap scheme run concepts, particularly against play side 3-techniques in order to get movement at the point of attack. These are also the same coaches who will choose to run zone concepts at the bubble (or shade/5-technique) side so their front side guard can climb to the next level. Alternatively, coaches that are designing their RPOs against predominantly even front teams have chosen to use some double pull concepts, mainly in the form of buck sweep and other pin and pull variations, because of the probability of getting two linemen out at the point of attack.

Eric Davis at Mankato East High School (MN) told us his power and counter gap schemes were less efficient vs. 3-4 teams, partially due to our inability to block the outside linebacker when our kick out player blocked the 4-techhnique or 5-technique.  “We also had some struggles getting to the backside linebacker with our backside guard on inside zone vs. 3-4 teams.  So we’re hoping that an expansion of our RPO package will fix that problem. We did run our buck sweep very effectively against those teams as well as power out of tackle over. While inside zone was not great against the 3-4, it was extremely effective against the 3-3 Stack, probably due to the fact the gaps the defenders were responsible for were more clearly defined immediately post-snap.”

Mark Holcomb at North Davidson High School (NC) will break the run concepts from his RPO package into attacking front structure as well. Against four man fronts, Coach Holcomb will use his fold scheme, where he will block down on the nose and wrap the center or the uncovered lineman for the play side linebacker (Diagram 1). It’s a way for him to block the sixth man in the box. Against three-down looks, the gap blocking structure of the buck sweep helps even against 4i-techniques because he will use his tackle on that player in order to have two puller with the guards (Diagram 2). 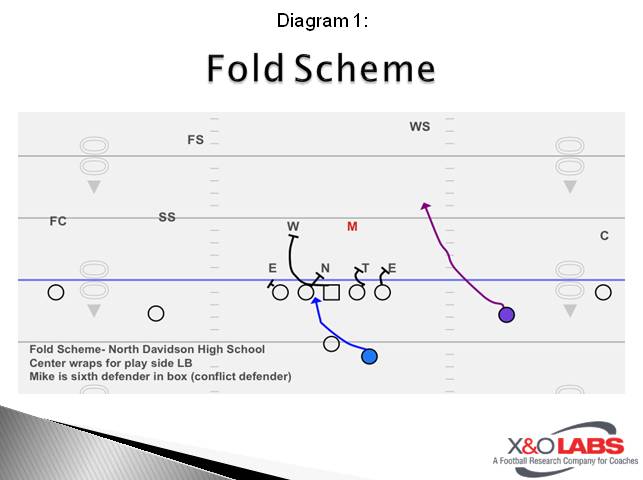 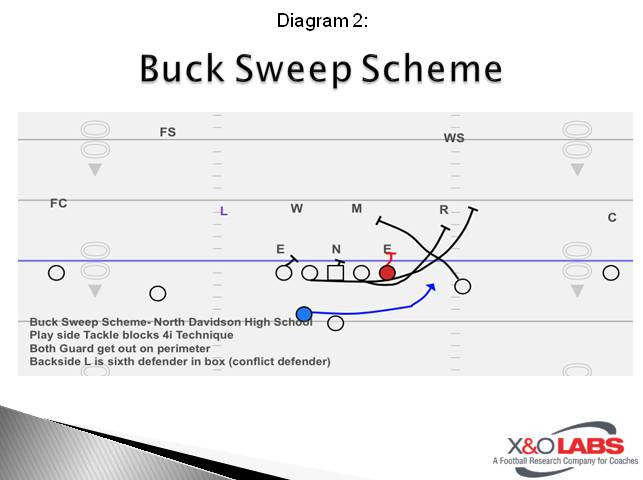 Joe Osovet, the former head coach at Nassau Community College (NY), will check the portions of his RPOs to the shade techniques in four-down fronts. Although his run portions are not married to his RPOs at all, he told us he will run the best run concept that we will think is best against the front we are going to face. Then he tags his RPO concepts to what we think the back end of coverage is going to look like. “If we had our druthers, we want to gap things,” said Coach Osovet. “We want to run our inside zone to the low shade, our G/T counter to the high and our dart scheme is predicated on where the bubble is or the second level linebacker alignment is.”