Training the quarterback pre-snap eyes seems to be the crux of using this system and since 51 percent of coaches will have their quarterbacks make the decision, rather than themselves from the sideline, (See Graph Below) it’s imperative to study how he is making the right read. We wanted to target our research specifically to sources who have a continual transition at the quarterback level, particularly those at the high school and small college ranks where time can be a factor in educating these players about the nuances of this system. 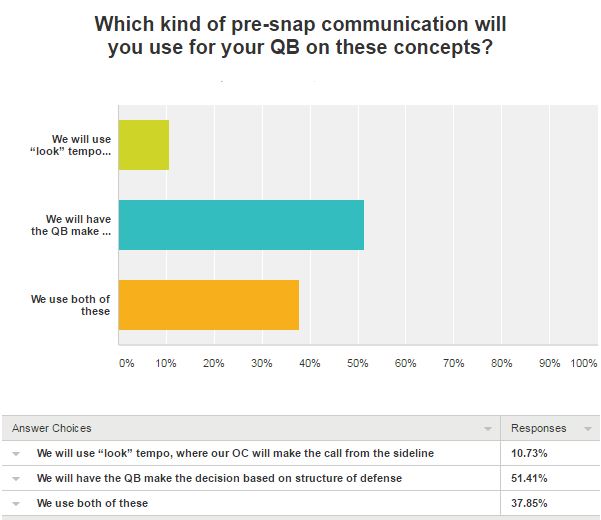 At the high school level, factors such as academics and extra-curriculars can put a stretch on the time these players need to understand this type of system. Per our research, leverage can be determined by the following factors:

Once the quarterback identifies his advantage, he must be taught the means in which to attack them. In this study, we are going to examine how each of the following factors tie into the quarterback’s decision to make the best play call at the line of scrimmage, and not after the ball is snapped. After all, the premise of this system is to be in the “best play scenario” every snap. This can only be done through repletion and a constant education of your quarterback. But whatever decision he makes, it’s essential to live with it. As many of the coaches that worked with us told us if you’re going to commit to this type of system, you must live by your quarterback’s decision. In the words of the great Bill Parcells, you can’t allow him to cook the meal if he’s not allowed to buy the groceries.

Jason Eckert at New Richmond High School (WI) subscribes to the R4 methodology devised by the National Football Academies when training the quarterback’s pre-snap eyes. It’s commonly referred to as the acronym H.A.L.O., which is described below.

Hard Deck: Identifies deep space from underneath space, which is 7-8 yards of space above line of scrimmage. The quarterback is asked to find him and then draw a line out from him. There are five passing tubes. Tubes on the numbers, tubes on the hash and a middle tube. They are separated by underneath coverage (Diagram 61). 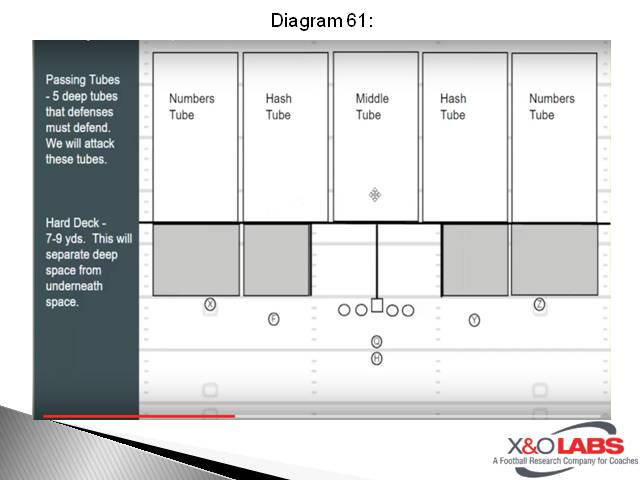 Apex: Apex is the spot halfway between the EMOL and the closest receiver. This will separate run space from passing space (Diagram 62). 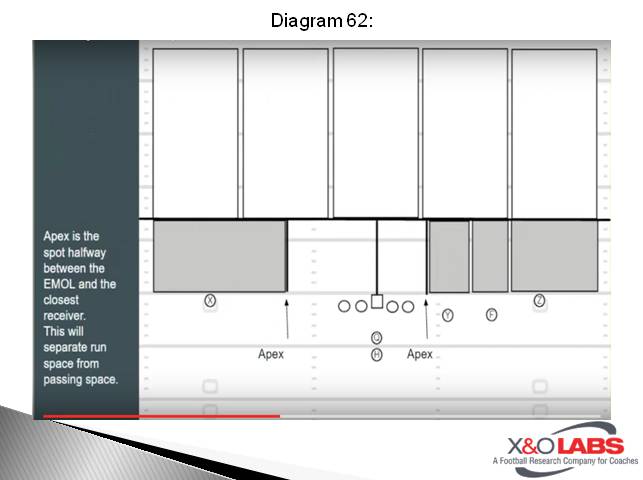 Outside Space: This is the passing space under the hard deck. Each receiver has their own outside space (Diagram 63).

“I don’t talk in terms of coverage very often,” Coach Eckert told us. “One reason is I sometimes have a difficult time figuring out what coverage some of our opponents are supposed to be in.  Part of that is some teams are just bad and sometimes high school kids don’t do what their supposed to do. If I’m confused, our quarterback will be more confused. We talk more in terms of space. He needs to know how many defenders are taking away or capping space above our hard deck. This will tell him routes that are being taken away pre-snap or deep space we will be able to attack.  He needs to understand what space the defense is giving up underneath the hard deck. Our quarterback will look concept side first and then work backside. If I want his progression to change, I’ll add a tag for that. So, I control his progression. This limits confusion.”

In Coach Eckert’s system, each route is designed to attack the open space as it pertains to these categories. The quarterback and wide receivers will only choose the specific screen they want tied to the run game. “They are taught what works best, but they make the call on the field,” said Coach Eckert. “Our keys screens were decided by our players, unless I wanted a particular screen. So, I would just call a run play with ‘key’ added to it. They decided, based on how the defense aligned, whether the screen would be to the inside or outside receiver. Other than that, we don't change routes at the line of scrimmage.”