When a run is not necessarily the best play call for a certain situation, the pre-snap RPO pass tag provides options. Scenarios such as the leverage of a force defender and the depth of corners and safeties all attribute to the quarterback making a decision at the line of scrimmage. According to our research, we’ve found the majority of coaches, 42 percent, use between 4-6 pass tags in their run game (See Graph Below). In this case, we study the most productive RPO concepts used by our sources based on all those situations that unravel pre-snap. We segmented our research into detailing which concepts coaches are using to exploit a perimeter numbers advantage as well as an interior numbers advantage. 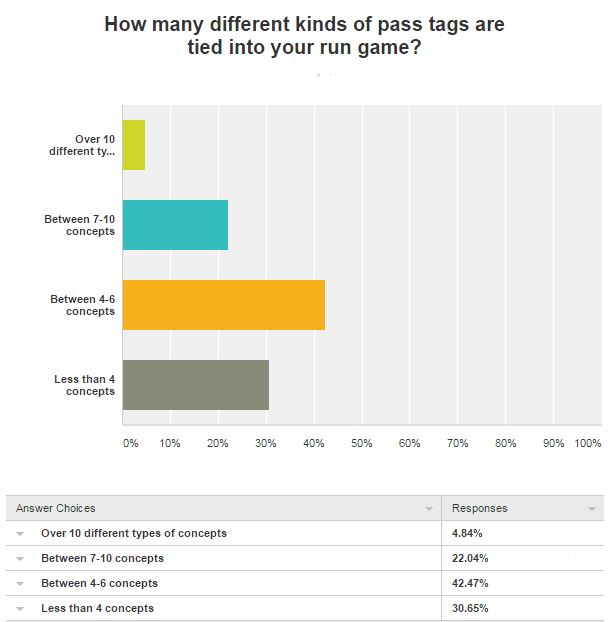 Backside “gift” concepts are most associated with the single, or X receiver in trips formations. Much has been written on this already, but we would be remiss if we didn’t include this in our research because so many offensive coordinators have gained a great deal of traction using them.

At Tufts University, slot receiver coach Pat Murphy used the same “open side matrix” he used while a head coach at St. Anselm College. It’s the only decision he had the quarterback make pre-snap based on the alignment of the corner on the backside X in trips. An example of the menu is below.