It’s important to note that much of the design component of these pre-snap RPO tags lies in understanding offensive formation structure and defensive coverage structure. We all know that the beauty of the RPO system is taking all the top route concepts in your offense and marrying them with the most productive run concepts you have. While it may be difficult not to get carried away with all the possibilities, we’ve found that at the crux of this design is getting the quarterback to understand what a pre-snap read is and what a post-snap read is. So, we’ve gone ahead and defined it for you:

Pre-Snap Read: These are decisions made by the quarterback pre-snap to either run or pass the ball depending on the pre-snap leverage of a particular defender.

Post-Snap Read: These are decisions made by the quarterback post-snap to either run or pass the ball depending on the pre-snap movement of a particular defender.

While we’ve found that many offensive coordinators will use both of these models to get into the most advantageous situation, this particular study is devoted to how coaches are teaching their quarterbacks to make the right adjustments pre-snap to take advantage of either numbers, leverage or grass of the defense.

The concept of numbers is specifically tied to a numerical advantage by the offense at the point of attack. It’s a universal concept; defenses will try to do the same thing by the time the ball is snapped to get a plus one defender around the ball. While this is not a novel idea, we felt that it’s important to educate coaches on how our sources were treating box count on the interior and numbers count on the perimeter to effectively get in the best play scenario.

Important: Keep in mind the pre-snap RPO system is commonly used to supplant a non-mobile quarterback, who is not included as a potential runner. For example, a 10 personnel offensive structure will only have five blockers. So six in the box will trigger a throw.

Quarterbacks, even at the lower levels, are now asked to count the box. Most coaches refer to the box as the areas two feet outside the offensive tackle. Quite simply, if a defense has even numbers or less numbers, run the ball. 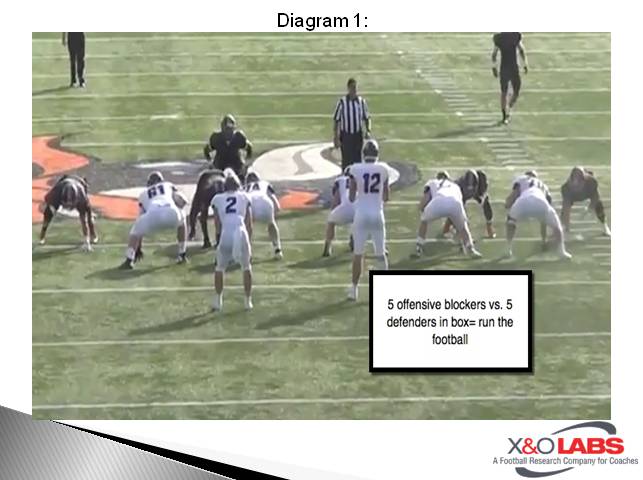 If a defense has more numbers, throw the ball. 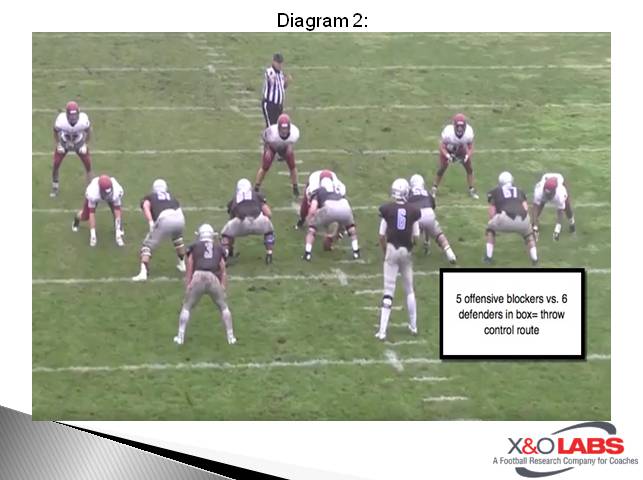 Since the majority of pre-snap RPO concepts are used to manipulate two-high safety structures that will try to find a way to sneak an extra player into a fit, in most cases odd fronts and even front will have a possibility of seven defenders in the box.

Now, where it gets tricky, is when defenses start to “mess” with those overhang defenders, particularly on odd structures to either be run or pass players. Conflict defenders are those tweeners, who may be in a position to play run or pass. But how effective they can be in playing run or pass is in direct relation to how far they are from the tackle box. And that is where creative coaching comes in. At this point, offensive coordinators have three options: Scott Chisholm, the offensive coordinator at Berryhill High School (OK) will teach his quarterback to run the ball to a 5 man or less box, so he teaches his signal caller to ask them to declare whether or not that apex player is inside the wide receiver (usually the slot) or is he outside? “If he’s inside that wide receiver, we will usually throw the bubble, because we’ll outrun that outside linebacker and gain five yards before that safety comes up (Diagram 5),” coach Chisholm told us. “This also puts that OLB in a bind, he’s starts thinking, ‘are they reading me? Are they counting numbers?’ For us it’s just easier to teach a 17 year-old kid this concept, rather than reading him.