At Shoreham-Wading River High School, we employ a run-heavy offense built on a foundation of inside zone, power, and counter. Because of this, we see many packed boxes and Cover-0 looks throughout the season. Around the mid-season mark, we were looking for ways to add some wrinkles to the offense that brought big results and required minimal learning for our athletes. During one of our post-game film sessions, our head coach Aden Smith - the man who deserves the credit for introducing myself to the concept - brought up the idea of running a QB power paired with a flare-motion by the RB - The QB would make a pre-snap read of the playside-support defender (or any other adjuster) and either throw the flare or keep the QB power. This added wrinkle to our offense yielded large gains to our offense and helped us on our way to winning a Long Island Championship. 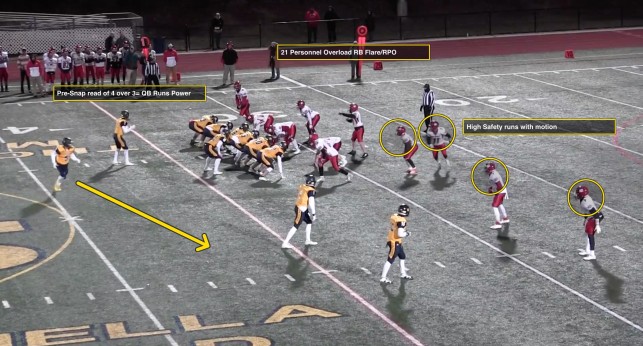 Before beginning, I would like to mention that I am extremely fortunate to work with an incredible coaching staff - Head Coach Aden Smith, line coaches Tom Foley and Bobby Puckey, and running backs coach Nick Mauceri. This package I am about to present does not achieve the success it does without their hard work and input.

We initially installed this concept to be run out of a 21 personnel-look with the fullback in the sniffer position and the running back offset-weak in the gun. Teaching it to our kids was very simple for us as we just combined two concepts we were already using in our offense. We had our line, tight end, and fullback block power, while the frontside WR stalked for the flaring RB.  While we didn’t stress it at first, we eventually had the backside WR run a slant route.

While some flare-type RPOs can be considered post-snap reads, we felt strongly about making this a pre-snap read. We were fortunate to have an incredible athlete at QB, and we didn't want him wasting any time after the snap, in deciding if he should keep the ball or throw it. If he wasn’t sure as to what to do, he was instructed to keep the ball.

As mentioned before, we initially noticed that the defender that adjusted to the motion would “slow-play” the flare, almost as if to believe that we were never going to throw it. Of course, his slow adjustment would trigger our QB to keep the ball and sometimes get tackled by the adjusting defender. It’s important that the QB knows that there needs to be a full commitment by the adjuster to attack the flare - If the QB is reluctant to throw the flare when it's there because he's not sure from his point of view, instruct him too! The defense must respect the flare motion in order to open up the QB run.

The most important thing we had to do in practice (aside from reps) to make this concept efficient was practice our flare throws. During our special teams’ periods, we had our QBs throw flares to any kids who weren’t on the field during our special teams periods.  The amount of throws kids can get over the course of two five-minute periods is unbelievable if they are focused.

The flare motion must be run in a manner that puts horizontal stress on the defense.  We are looking to create distortions with our motion, just as you would when you run a full-speed jet-motion. This means that the flare motion should be run as fast as possible that allows the athlete to maintain the ability to adjust to and catch the football.  If the motion is too slow, the defender adjusting to the motion may be able to make the play on the QB if the QB keeps the ball - something that we don’t want to happen. The motion should also stretch as wide as the QB’s arm allows him to throw.

Even though we are running a basic power with a fullback kick-out, it’s important to note that there will most likely be defensive flow to the flare motion, especially after you run the concept a few times.  At this point, you can take the approach of blocking power as if you were running power read - Prepare your pulling guard to possibly take a wider track to the play side LB, and have your double team be alert to the backside LB scraping to the play side a little sooner.  I will include some constraint plays towards the end of the article to help combat the fast flow of the defense in this case.