As a former flex bone option quarterback at his alma mater, offensive coordinator Trevor Stellman was enamored with the flexibility of the post-snap RPO game but wanted to find a way to mesh it with the structure of a pure triple option offense. While most RPO offenses contain a backside read away from the run action, Coach Stellman wanted a read directly in his quarterback’s face. Something most option quarterbacks are accustomed to seeing. This would mean the quarterback would actually have the option of running the football on the perimeter, rather than throwing it out there to an intended receiver. The creation became a pure option football concept that is quarterback friendly. Coach Stellman calls it a “QB driven system,” so much so that in 2016 he called it 114 times. He called this play 114 times or 17% of the time and the QB ran it 12 times. TMC averaged 6.8 yards per play on this scheme and 9 yards a completion. The QB averaged five yards a carry and handoffs were seven yards a carry.

Overview of the System

At Thomas More College everything revolves around the midline zone scheme, which is analogous to Coach Stellman’s triple days. The difference is he’ll use multiple formation groupings (which he calls formations) particularly in the form of 21 (two backs, one tight end), 11 (one back, one tight end), 20 (two backs, no tight end) and 10 (one back, no tight ends) for every run he uses. “We think of groupings as what they can do from that formation,” Coach Stellman told us. “Our goal is 24-26 formations. If it’s too much, we’re not getting enough time during the week to practice it. If we’re too little, we get stale in what we’re doing.”

But Coach Stellman doesn’t use numbers in his system. Instead, he’ll use colors for each personnel grouping so players know exactly what they are supposed to do from that grouping. Because of this labeling, he’s able to get creative on what he can do from those formations, whether it’s a motion look or moving the fullback from the backfield into a wing.

Although TMC is a no huddle outfit, it doesn’t run at breakneck up-tempo speed. Coach Stellman calls it a “methodical” up-tempo. “We’ll get the ball snapped with less than 20 seconds in the play clock,” he told us. “We’re not trying to get it snapped in 30 seconds. We’re not like the Baylor’s and the Oregon’s of the world. It’s about being efficient and not too quick.” The reason for this is because Coach Stellman will use various pre-snap shifts and motions to help see coverage and in order to clear up the read key for the quarterback. There are specific concepts built into a name. All of TMC’s runs are cities and states. If it starts with an “M” it’s a midline run such as divide zone, isolation or the midline RPO concept that will be discussed in detail in this report.  Power runs start with “P” and counter runs start with “C.” Cold is left, hot is right, it’s that simple. “Because of this we don’t use built in tags that we have to add,” said Coach Stellman. “We don’t need to necessarily tag every little thing. If we want a passing concept built in, we just tag that concept.”

Quite simply, the offensive line blocks inside zone just like midline but the distinction between midline and inside zone is that the midline play is not designed to cut back in this system. According to Coach Stellman, the read side offensive tackle must track the hip of guard on the midline mesh because that linebacker will really be coming downhill. “The midline hits so quick, those linemen can block the second level just by being in the way,” Coach Stellman told us. “The tight end either zone blocks or will get wider than the defender on or inside them. If it’s a 9-technique, we still arc on them so what that does is promote the handoff on the midline zone scheme.” One of the things that Coach Stellman will do is over split his play side offensive tackle to make sure there are two off the edge on the read side (Diagram 1). 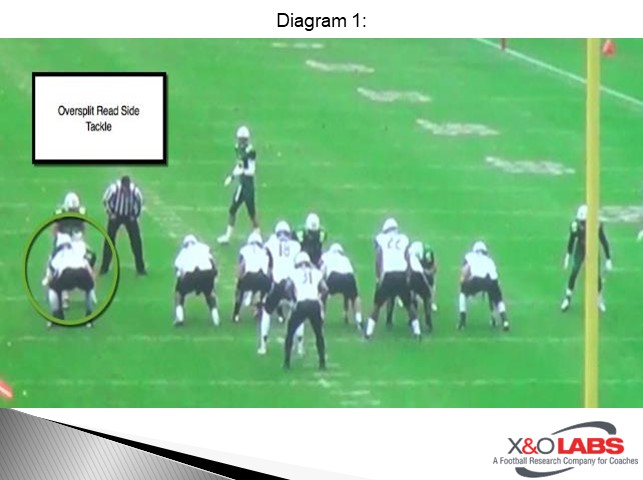 Before we detail the post-snap read, it’s important to cover the midline mesh that Coach Stellman teaches his quarterback. For starters, his quarterback is typically 4.5 yards from the line of scrimmage with the back at 6.5 to 7 yards from the Center. He will move a faster tailback further back and a slower tailback further up, with the goal being a 2.5-yard gap between the quarterback and tailback. As in most pure option coaches, Coach Stellman puts a premium on the quarterback getting off the mesh point, but it’s a completely different mesh than zone read. “In true zone read, you tell your quarterback to replace the defender that you’re reading,” said Coach Stellman. “We can’t replace the guy we’re reading, because we’re going to get tackled and not throw the ball.” According to Coach Stellman, the key coaching point is about getting from the back to the front foot and bursting out straight for a couple steps. “If he (quarterback) goes for three hard steps his shoulders and eyes will be in line to make the completion,” said Coach Stellman. “We’re not asking him to throw 30 yard passes here on the run. It’s five-yard routes. There’s not a lot of deep throws or hole shots. It’s quick intermediate routes.”