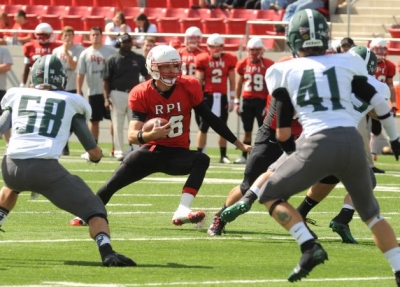 Editor’s Note:  Ralph Isernia was named head coach at Rensselaer in March 2012. A veteran of more than 20 years in coaching, he has previous experience from Division III, Division II and the FCS. Coach Isernia came to Rensselaer from Ferrum College, where he was the assistant head coach and offensive coordinator for the Division III Panthers. In his two seasons he helped the team to a share of the 2012 USA South Conference championship and coached two different quarterbacks who both won league Offensive Player of the Year honors.


Isernia spent the six years prior at the University of Charleston, where he was an assistant head coach, the offensive coordinator and interim head coach. He was a regional finalist for the Division II Assistant Coach of the Year Award in 2008, 2009 and 2010.   His accomplishments with the Golden Eagles included directing an offense that set numerous school records while helping the team become a contender for the conference title each season. The offense was consistently ranked among the best in the league in points per game, rushing, pass efficiency and sacks allowed. Among the players on the team, which was nationally ranked in 2009 after a 9-2 finish, were two who signed NFL free agent contracts.

Isernia has also coached at Bucknell University (2004-05), Mansfield University (2001-04), Defiance College (2000-01), Methodist University (1994-00) and Western Connecticut State University (1991-94). He served as offensive line coach at Bucknell, helping the Bison to a 7-4 record – its best finish since 1999 – and a No. 30 national ranking. Offensively, the team was ranked ninth in rushing offense and 11th  in pass efficiency among NCAA Division I-AA schools.

This was the first season for me here at RPI.  Just like any coach entering a new coaching situation, I wanted to evaluate the talent on the team and see what each player did best.  It quickly became apparent that although they had run some read option in the past, the best personnel did not exactly match a triple option system.  Our best personnel would best be described as 11 personnel – one back, one TE and two WR’s.  So we adapted the system to match the personnel.

The TE in the Pistol Triple Offense needs to be a versatile athlete.  He must transcend the normal/typical role that a TE takes in a traditional scheme.  We not only used him as an “End-of-the-LOS” guy, where he extends the defensive front or perhaps sets the defensive strength call.  The versatility allows us to align the TE in any spot in 2x2, 3x1 and unbalanced formations.  We also align him as an H back or large slot back.  Although he is limited athletically and may not have the speed or shake of a slot, he does give us a better presence in the running game.  He is a bigger and stronger blocker that the rest of our slots.