Unlike RPOs, SPOs allow the QB up to 2 seconds to make a Post-Snap read.  Moreover, there are no concerns of a QB/RB exchange, no changes to the blocking scheme, concerns of an illegal man downfield or blitzes with man coverage.

Although RPOs are all the rage in offensive football at every level, we have been running SPOs long before the term conflict player was ever used.  In 2001, while I was the offensive coordinator at The College of New Jersey, we were faced with a 3rd & 6 at Midfield.  We called Trips Right Boot Screen Left with every intention of the quarterback booting to the right and throwing a screen pass to the back on the left.  For some reason, he threw to the Tight End on the frontside who got 9 yards and a first down.  After the series, I asked our quarterback, “Why did you throw the ball to the Tight End”.  He replied, “He was wide open.”  That was a V-8 moment.  From that point on, we always gave our quarterback a frontside pass option before throwing any screen.

On our drop-back SPO we run Stick, a pass we already have in our offense and a route combination most teams use for their RPOs.  We run it out of 3x1 Open and Tight.  We run our Boot SPOs out of 2x2 and 3x1 with a Tight End on the front-side.  All routes and protections are the same if we call Stick or the Stick SPO and Boot or the Boot SPO.  The only tag we will make is to have the screen-side WR Crack, if we do not want him to run the route associated with the pass or if we feel we need him to make a block at the point of attack.

Our SPOs are 2-Count 3-Man Screens.  In both our drop-back and boot screens, the offensive line will block the protection called for a 2-count.  We block slide protection on drop-back and man protection with a pulling guard on boot.  After the 2-count, 3 offensive linemen will depart down the line of scrimmage to the end of the box then go out, up and in.  In drop--back, it is the Guard, Center & Guard (see diagram 1).  Since the screen side guard is pulling to the boot-side on our boot protection, the 3 linemen going to the screen are the tackle, center, and guard (see diagram 2).  The other two linemen maintain their block. 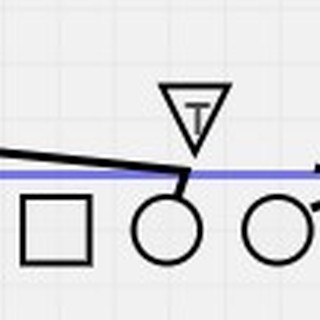