Case three of our special report will focus on run/pass concepts that put perimeter defenders in a bind, forcing them to defend both run and pass actions. In most cases, perimeter defenders consist of outside linebackers or drop safeties in zone coverage that have both run and pass responsibilities post-snap. It is these defenders that can be manipulated by showing a fast run action (such as Power, Speed Sweep or Outside Zone) then pulling the ball to throw in the area in which he vacated. Since many of the coaches we spoke with prefer to use the Power Read action as the run complement to these perimeter RPOs, we decided to start there.

For the last four years (or at least since Cam Newton left Auburn) the Power Read concept has been all the noise among Spread offensive coaches. Since much has been written and reported on this concept, defenses have learned to tighten up their schemes to defend it. As a result, these offensive coaches started getting on the whiteboard to design some lethal play-action concepts off the Power Read action, some of which are the RPOs detailed below. Now instead of the play side defensive end being the read in the run game, the apexed linebacker becomes the movement key. We asked the same set of questions (as we did in case one) to those coaches who are using the Power and Power Read RPO.

Question: Which kinds of pass route progressions do you utilize in the Power Read RPO concept?

Brett Dietz, Offensive Coordinator, DePauw University: “We are going to run a double post to the number two receiver side with a wheel route with the blocking back coming out of the backfield.”

Dan Ellis, Great Valley High School (PA): “We choose simple routes that are easy to complete for our quarterback. These consist of hitches, fast screens, bubbles, slots and double slants. The routes must be short so that all throws must be out before the pulling guard can reach the second level. The goal is four yards. But putting horizontal pressure on the defense creates opportunities for short throws to turn into long gains.”

Austin Heaps, Lehi High School (UT): “We utilize route concepts that the back we are faking to will hold the flat defender. In the following example, the back is our flat throw, high/lowing the corner in cover-two with the corner route over top. The snag holds the hook defender and then stretches the flat defender against cover-three or Quarters coverage, while the outside receiver sits on the outside linebacker’s outside hip. The corner route clears the deep coverage.” 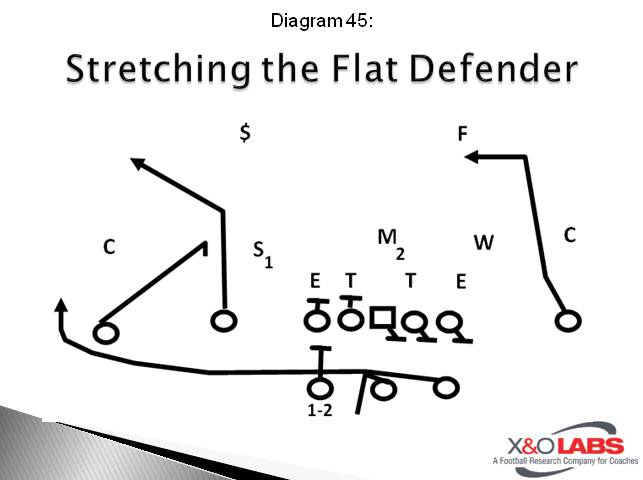 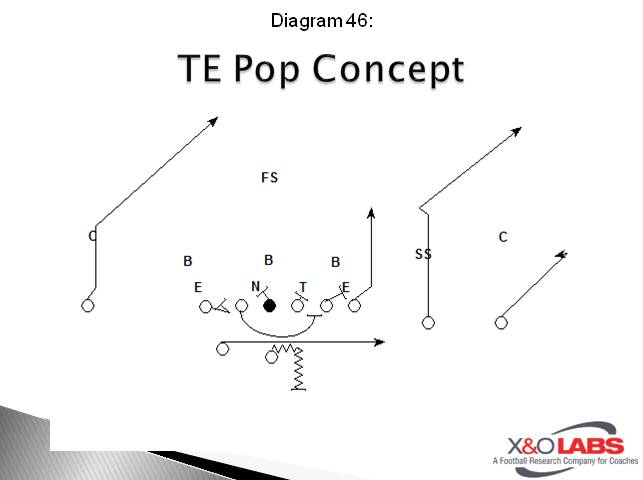 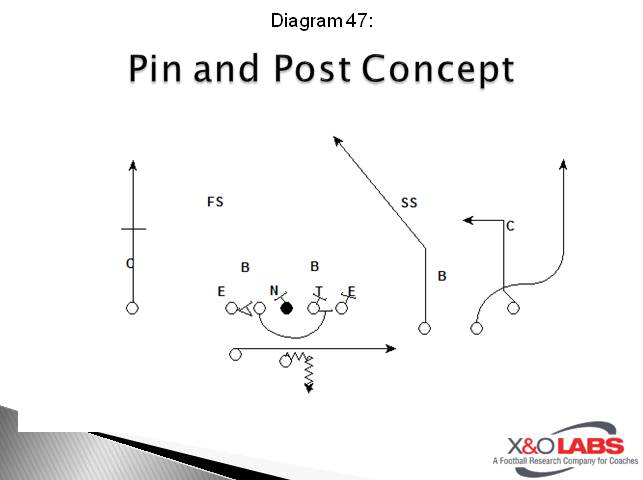 Question/Request: For those that use pass progressions off this concepts, explain the coaching points you use to teach your offensive linemen not to advance downfield.

Editor’s Note: At the college level, offensive linemen are allowed to advance up to three yards downfield before being called for an illegal man downfield if a forward pass is thrown.

Greg Lauri, Offensive Coordinator, Nassau Community College (NY): “As in all of our play-action pass concepts, the most important thing for the offensive line to understand is that it must ‘sound’ like a run play. This means that they need to be aggressive in their initial block and drive the defensive lineman for at least their first two to three steps. We emphasize that they are not to block the linebacker they are responsible for, unless he attacks the LOS. This helps to prevent our guys from going downfield.”

Kyle McKenna, Brooklyn Tech High School (NY): “Our Power Read play-action pass is a perimeter read. If the read fast flows, we throw quick slant to the slot receiver in the vacated area. If the read stays, we run Power to the right side. Our QB takes one crows hop to read the Will, while our offensive line blocks Power with a Y kicking out.”