As the quarterback continues to be a focal point of an offenses’ run menus, it only becomes natural for defenses to find ways to reclaim the numbers game by committing more defenders to defend the run. This leaves offensive coordinators with two options: have the belief, and faith, that the quarterback can beat that one defender at the point of attack OR devise a run/pass option to manipulate that defender. Choosing the latter could elongate the possessions, and consequently, the health of the signal caller. Whatever option an offensive coordinator chooses… one thing is certain, a running quarterback has more direct impact on the passing game than any other player on the field. In this case, we are going to present our research on the run/pass options that coaches are devising off the quarterback runs in their offensive menu.

Editor’s Note: Quarterback driven RPOs are run/pass options where the run action is based off a designed quarterback run scheme. While these can be combined with jet motion or a flash fake, there is no option of any other player carrying the ball.

The benefit of quarterback driven run/pass options is that the quarterback has more time to decide on his read than he would if he were forced to make mesh fake with a back than have to progress to his read. “You lose a blocker in tailback driven RPO’s which delays the decision making process,” said South Dakota State University offensive coordinator Jason Eck. “You get more forgiveness with these quarterback RPO’s. You can make decisions later. You can ride the fake a little more. It often gives you air behind throws. So, when the quarterback run game happens, you’re thinking run any way. It’s more naturally to run it off of. You’re not flatfooted on throws.”

At Slippery Rock University this past season offensive coordinator Justin Roper made good mileage out of his running back swing RPO concept, which is coupled with some form of quarterback gap run. The offensive outfit at “The Rock” is a base 11 personnel outfit, with an attached tight end at the line of scrimmage on most snaps. Defenses continually played with seven in the box and this basically became his version of power read, except he was reading a defender at linebacker level. Instead of doing actual power read, where the mesh point is all in one spot, they basically just extended the mesh point by ten yards where there is no possible way for that conflict defender to be right. The run action is going to replace whatever defender is the extra defender to the play side. 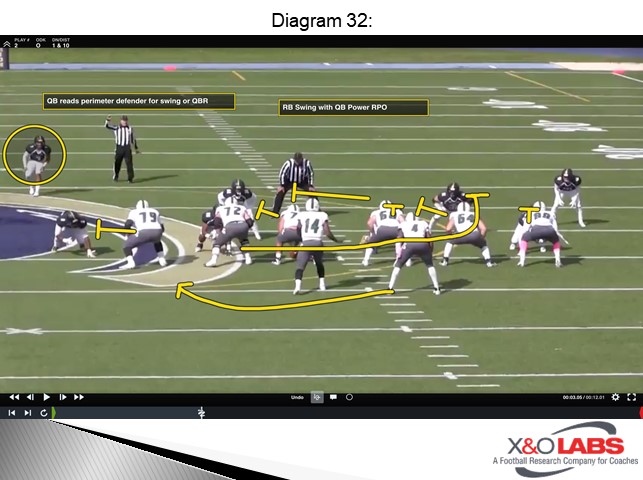 The read defender in this scheme will be the seventh defender in the box. During the week Coach Roper and his offensive staff will decide if the opponent is a two high safety or one high safety defense. “If it’s a two high team, the box is blocked regardless,” he told us. “The extra roll down defender, or the extra field side linebacker, are the only guys that can really effect the run play.  If the extra defender to the field takes the running back on the motion, we are using the run to replace him. It’s going to the same side but the stretch on that defender is a lot more than traditional power read mesh.”

“I think it is an easy read for your quarterback,” said Coach Roper. “So, if you have a quarterback that is a really good runner, but maybe isn’t good at making certain decisions, you can put a huge stress on the defender without putting huge stress on your quarterback. The other reason we went to it was, it gives you the ability to account for a seven-man box. Even in ten personnel we did it sometimes, especially in trips. In trips you can run it to the trips, even if they are in single high they are giving you a six man box, you take one of the linebackers out of the equation and run against a five man box.”

“If it’s a two-high team then the quarterback really only has to see if the safety is rolling with the running back motion. If the safety comes down, then we run the ball. If there is no movement, we throw it to the back. We used it predominantly for single-high teams because they get an extra defender in the box.” In that case, you can do it two ways. With your tight end to the field in a trips set, if that safety wants to roll down over the tight end, your quarterback is going to read the safety.