Multiple RPOs Off Inside Zone

Our offense is looking to spread the field in order to get the ball into space. For us, getting the ball in space could be throwing to an open man in space or running Inside Zone into a 5 man box. We do this by giving our players the ability, and the skills, to get the ball to the man who has the most space and best opportunity to make a play. Our Inside Zone RPO is the way we feel we can best accomplish this. It allows us to use a sound blocking scheme that can handle 6 in the box while having a passing scheme that can stress the defense both horizontally and vertically.

The blocking of Inside Zone could, and has, taken plenty of articles for itself. As an offensive line coach, I hate to breeze by line play but there is no way to do it justice and still include the relevant information for the RPO. We block Inside Zone by leaving the backside end man on the line of scrimmage for the quarterback to read. One concept that we really try to hammer home is that, while our double teams must get vertical movement, we want them to be controlled and methodical in their movement of the defensive lineman to the linebacker. Since our QB has so many options on a pull read, he more time before our lineman get downfield. We’ve also found that our kids do an excellent job of getting a feel for if it is a run or a pass and are able to shut it down around the 3 yard line.

The mesh between our quarterback and fullback is a huge part of this play. From the running back’s perspective he is looking to take the ball coming straight downhill with his shoulder square to the line of scrimmage. There are several coaching points we use to help insure this. The first is the alignment of the fullback. We will have him stagger 1 yard behind the QB. In addition to this we will tell our QB to get perpendicular to the line of scrimmage and reach the ball straight back. This creates a situation where, if the fullback wants to get the ball on a clean path, his natural path is to step directly behind the QB and come straight downhill. From the perspective of the QB, we stole a page from the flexbone coaches and tell him that he is going to give the ball unless the read man can tackle him for less than 2 yards. We tell him to read far shoulder, far hip, near knee and just about any other body part imaginable but in the end we found, with practice and film work, our QBs get a pretty good feel for what the end man on the line of scrimmage is going to do. We also try to stress the idea that the longer the ball is in the running back’s pocket the more time he has to read the intentions of the defender. 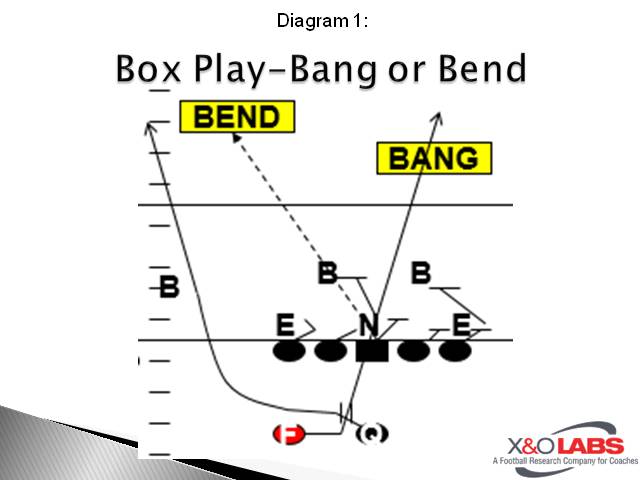