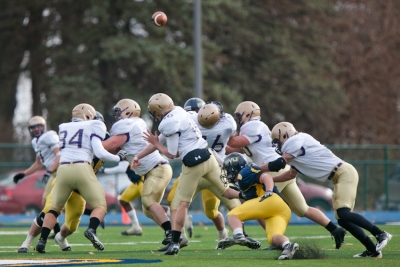 With increased popularity of RPO plays on offense, thus too have been the improved defensive techniques from the second level to try and stop them. Here at Loras College our staff has found ways to give our offense the best chance to succeed using the third level (or safety level) as the focal ‘read’. Our RPO’s generally use the second level, or linebackers, as the ‘conflict’ defender. That said, defenses have responded by having their ‘read’ defenders faking or bluffing their intent. An example might be a ‘conflict’ defender showing inside the box alignment and bailing out into a pass lane then subsequently aligning wide and shooting an interior gap on the snap. Stationary ‘read’ keys are much easier to define for a quarterback than those always moving around. We use third level defender alignment, depth, and eyes to help our quarterbacks determine where to go with the football. In this report we will outline a few of the play examples exclusively using 20 personnel (1 RB, 1 Hybrid, & 3 WR’s) in which we read third level defenders. These examples were successful for us this past season.

As soon as the QB can determine the location of the safeties, he will identify if they are: 2-High, 1-High, or 0-High. Our general rule we teach him is the following: 2-High Safeties – lean toward run, 0-High Safeties – lean toward pass, 1-High Safety – Your call. We expect him to make an educated decision. In any case, where we put the decision on the quarterback and it could be ‘gray’ we want to give him baseline knowledge of where to begin.
In most 2-High Safety looks, we can identify one ‘conflict’ defender at the second level to ‘read’, but in cases where this defender is moving around, we use the third level to help clean up the picture. 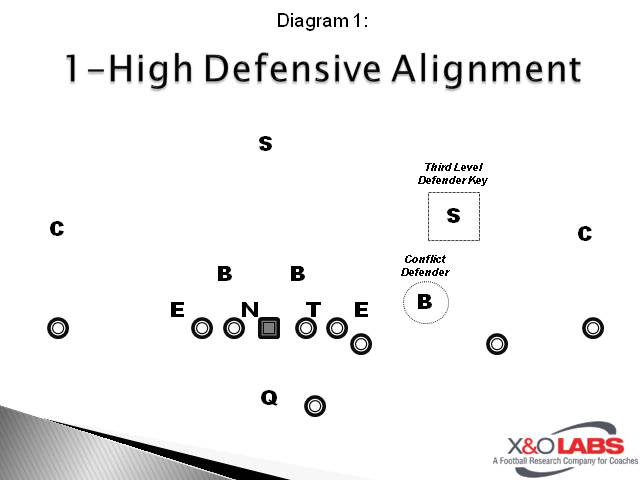 Though we had a ton of success throwing the ball this past season, and statistically it appears we’re a ‘pass happy’ offense, our goal is to run the ball first if the box is in our favor. If a defense completely outnumbers us in the box, our quarterback’s job is to highlight the matchup in the pass game. However, his complete understanding of how defenses fit together can allow him to still run the ball even when it may appear we are outnumbered. Most of our RPO’s have multiple pass options for the Quarterback to choose from.

We introduced the RPO system two years ago with primarily one run and one pass option to give our quarterbacks beginner level understanding. Since then, we have evolved into providing him with two, sometimes three pass options in addition to the run. This has allowed us to feel confident knowing there should always be a winnable match-up based on personnel or leverage. Based on percentages, we typically have a 67% chance of throwing the ball and 33% running the ball on any given RPO. As mentioned before, there are even RPO’s that give us a 75% chance to throw the ball and 25% to run.
Even with the high pass probabilities, we start with the box first analysis and look to run the ball. At the snap, the decision is completely up to the Quarterback. He must have an understanding how the run play is being blocked. If we are completely outnumbered with blockers vs defenders, his decision to pass is simple. However, if we have what we call a ‘1/2 Defender’ creeping near the box, our quarterback could still hand it off. A ‘1/2 defender’ is a defensive player that we are not accounting for in the blocking scheme beginning to enter the run box (Diagrams 2 and 3). At times, he could double as the ‘conflict’ defender that we base the RPO off, but this is not always the case. Some ‘1/2 defenders’ may not have an immediate threat to our run. 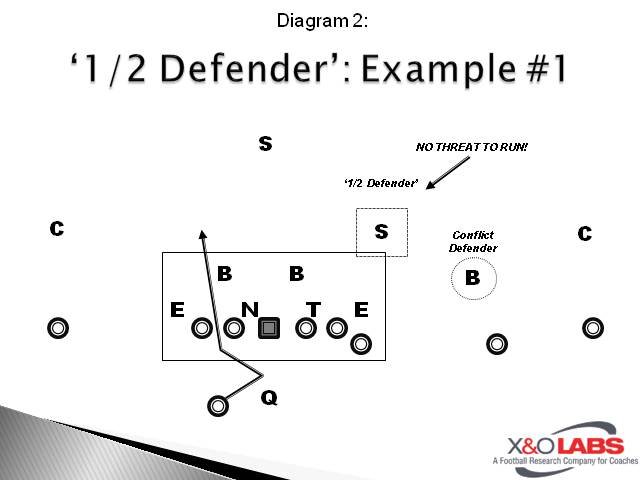 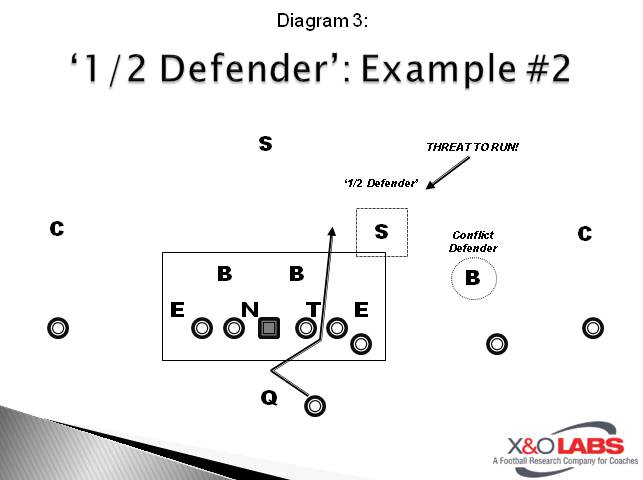 The RPO used is our Power Gap scheme along with a quick game passing concept. Using the teaching we mentioned above, a 1-High Safety shell, places the decision on our quarterback. He uses his understanding and preparation to determine whether we can still run the ball or throw to matchup based route. The pre-snap defensive alignment shows the backside safety playing underneath the single side WR to take away the quick route and play wide run support. The box count is still 6 on 6 even though the Safeties are not in a 2-High look. Our quarterback knows the run play is still good because the direction of the run is away from the roll down backside Safety. He knows the free safety is playing the pass over the top of the two receiver side, thus handing the ball off is the best option for us in this play, assuming the ‘conflict’ defender does not fall back into the box on the snap of the ball.