Buda Johnson HS (TX) opened its doors in 2019 with half of a Sophomore class and a full freshman class.  That first season, the Jaguars played a sub-varsity schedule and finished 8-2 on the season. They moved to a full varsity season in 2020 and just missed the playoffs with a 6-4 record.  In 2021, with a full Senior class, the Jaguars made the playoffs in just their 2nd full varsity season with a 9-2 record.  Coach Compton and the Buda Johnson offense averaged 43.5 points per game during this historic season.  Offensive success is nothing new to Coach Compton.  The Sail RPO concept detailed in this report has been a part of this powerful offense since that first sub-varsity season in 2019, but Coach Compton has had the concept in his offense since 2015 when he was the head coach at Rudder HS (TX).  Since then, this RPO concept has been an efficient and effective weapon for Coach Compton.  So how did he get there? Coach Compton says, “We were looking for a way to combine our Sprint-out game with our RPO game.  Sail and Quick Out were our top 2 rollout schemes.”  The combination of the sprint-out passing concept and a core run concept has proven to be effective for Coach Compton’s offenses over the past six seasons. 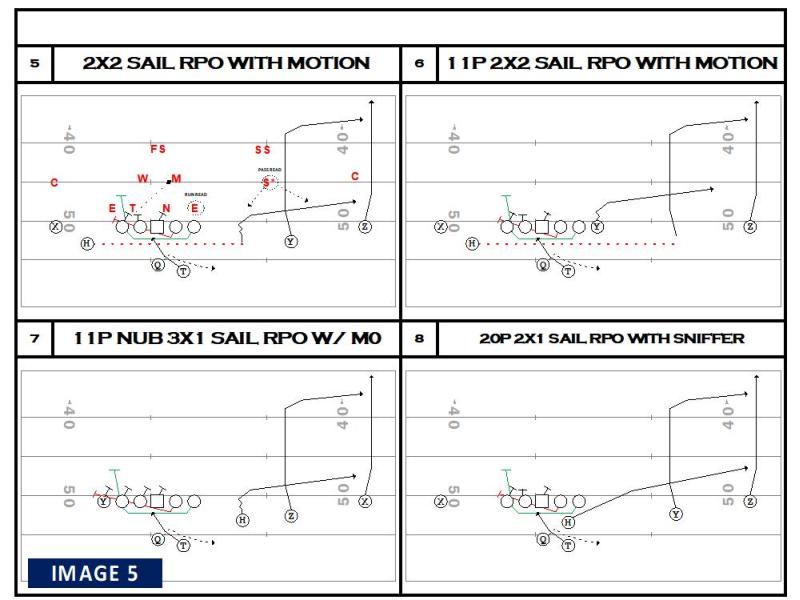 The Set-Up and the Versatility

The run game element of this concept is essential to its success.  And like any well-devised RPO, the passing game element works to adequately protect the run scheme.  For the Sail RPO, the effectiveness lies in its ability to place 2 defenders in conflict.

Coach Compton feels that any offense that will utilize a back-side read on a DE ( or C Gap defender) can employ this RPO. Coach Compton notes, “The first part of the scheme is being able to run the football with either Inside Zone, Outside/ Wide Zone, or GT (Counter). We always read the Backside DE. If we are playing a team that teaches their DE to play RB this scheme will be even more effective. Next, we are putting the OSLB in conflict. He has his base alignment. He is getting a run read so his initial thought is to add to the box. If he does this, we are able to have a 3/2 matchup in the flats. If he plays the pass, then we gain the advantage because now they are missing their extra QB player.” 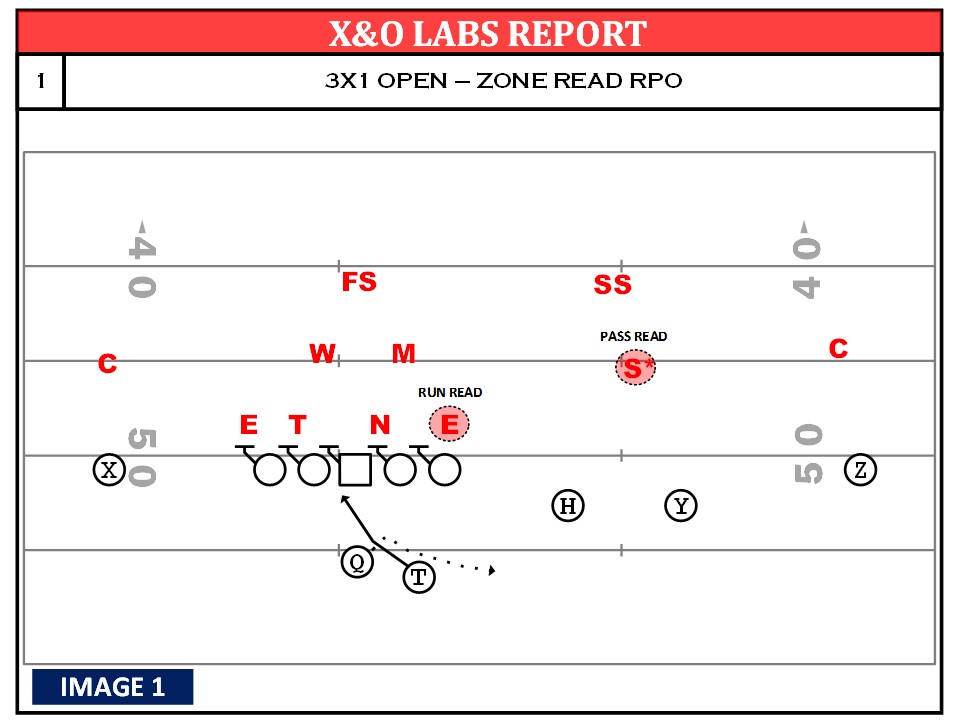 Reading the backside end and determining how the defense intends to play your read-game is important.  Coach Compton notes, “We do read the DE. Our QB is going to take 2 small steps towards the DE and point the ball back for the mesh with the RB. If the DE squats, then it is a give. If the DE is the dive player then we will pull the ball and go into our rollout steps. If the DE stays square and squeezes, we are able to pull the ball when he gets even with the mesh. If the DE is even with the mesh on the square squeeze, we feel that we are able to get outside.”  Compton goes on to recognize that the scheme has been most effective when they have had a mobile quarterback, saying “If we are able to run the ball effectively, it puts the DE and the OSLB in a bind when playing their assignments.”  It is also important to note the role of the Running Back, even when he does not get the ball.  Coach Compton coaches the RB to carry out the fake and “push his fake to the front-side so that the DE isn’t able to retrace back to the QB.”  As for the QB, his footwork is also important.  Once he gets a pull read, Coach Compton notes that “it is very important that he uses his first couple of steps to get depth on the rollout.”  This small retreat allows the QB to “close his shoulders” when making his 2nd level read and preparing to throw.