Tempo is an extremely valuable weapon in any offense. Particularly with the use of Run Pass Options (RPO) because it gives offenses and quarterbacks the ability to truly “have the pen last” on any given play. The difficult part of developing a Tempo / RPO System is understanding that just because you are a “Tempo” doesn’t mean we are always going fast, however, when we do want to go fast getting plays in as quickly as possible can be a challenge. This challenge is generally overcome by developing plays that can be called with one word, picture, or signal. Meaning that one word, picture or signal tells the entire offense the shift, formation, backset, motion, protection or run scheme and any tags or RPO’s you want to attach to the play. While this is without a doubt the more efficient than say sending in a call like, “A Push to Doubles Right Near H Jet 46 Stay Omaha / Bronco” (Yes that is an actual play call and yes I’ve had to signal that into a game), as a coach it can be very scary to tell your players “we are just going to call that Bronco and we will run it from Doubles Right unless we are on the Right hash when we will flip the whole play the other direction.” Even now almost six years into running tempo calls I imagine the blank stares I expect to get back from the players in my room.

It is hard to believe that as many times as I have called that paragraph of a play call telling everyone on the field exactly what to do and then watched in disbelief as guys on the field completely blow the play or even worse freeze up and give you that blank stare like they’ve never heard of that play before. So, you can imagine the look on my face when on a professional development visit to another school a few years back a very good coach told me “we carry 25 to 30 one word plays into a game.” I cannot remember if I laughed or not but I certainly didn’t believe it even when he went on to say “the players remember them better and are way more productive at the tempo plays than when we gave them full calls.” On the drive home from that visit myself and offensive coordinator Duane Taylor talked about testing that theory. We started out with three RPO based plays that we would install as our tempo package and tried them out in spring ball. By the fourth practice we had expanded our tempo package well beyond RPO’s and as of 2019 we were carrying about 30 tempo plays into a game and had at least by my last count 60 on the shelf. These three or some variation of them is where it all started.

I’m a nerd, there is no doubt about it, but one of my many nerdy tendencies helped with the development of our tempo package, which is my affinity towards all things space related. So, our first three tempo calls were planets in our solar system. The first was Mars, as a whole play call from the left hash Mars is “True Left Pull Near 46 Zone Read Uno / Eat” the call stays the same in the middle of the field and on the right hash the call flips to “True Right Pull 47 Zone Uno / Eat” 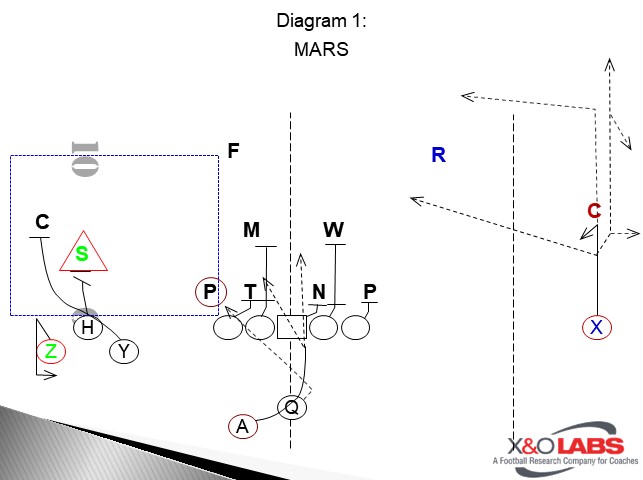 Broken down in raw terms it is 3 x 1 stacked with the formation into the boundary (F.I.B.). Inside zone to the field with an “Uno” screen meaning a step back screen to the number 1 WR in the boundary and an “Eat” concept to the single receiver side. An Eat concept is what we like to call “Free Access” quick game, essentially the quarterback and the single side receiver try to select the best quick game route between a Hitch, Slant, Speed Out, Fade, five step Bang Post or a back shoulder fade route. The “Eat” route defaults as a Hitch route and the Quarterback uses a pre-snap alignment read to find the best “grass” to put the route in. When in doubt he will leave the default on the term I like to use is “error on the side of stupid.”

We teach our quarterbacks that the tempo is generated by sprinting to the ball spot and getting our players line up early. However, getting everyone lined up quickly and getting the ball snapped is useless if he is in such a rush that he misses vital information and puts us into a bad situation. We tell our quarterback he needs to be “decisive and accurate” but we never tell him HE needs to go fast; it is critical that he go through his progression and be sure about his decision.

The first step in our progression is to Yes / No the free access “Eat” concept to the field. Our “Eat” concept can be used as a quick game passing concept OR as an RPO. It is designed to give a single WR the ability “Eat” by giving him one side of the field and a choice of routes in order to take advantage of a match up or in the case of Mars a defense that is over playing formation into the boundary. The default route is a hitch, but this can be changed pre-snap by evaluating the half field coverage tips. 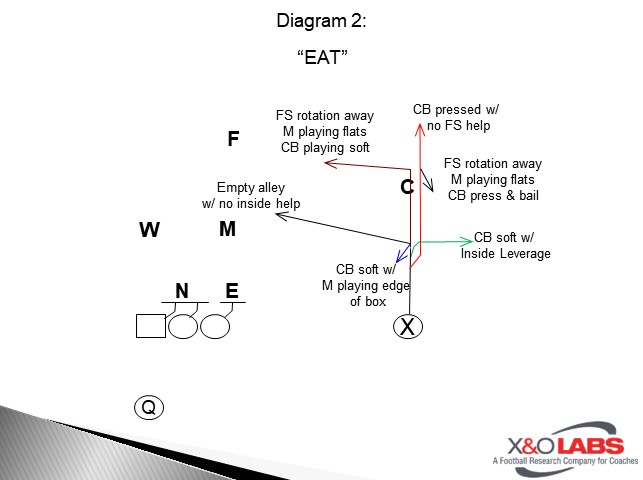