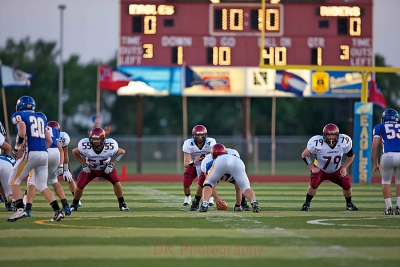 The Stick-Draw PRO play is a staple for both of our programs. We have had some great success with it over the years and have put some wrinkles in to suit our offense. We run a no huddle, up tempo, spread-gun offense that has its roots in the Air Raid.

This play started out for us, as what I would call a true, stick-draw play. In this play, the QB looks to hit the stick route while reading the play side LB. If the LB stayed in, he would throw the stick route. If the LB moved out to cover the stick, he would hand the ball to the RB on the draw. This is what Noel Mazzone (NZone) calls Detroit and have modified it to fit our system.

From that base concept, we have made a few subtle changes that allow us to make various pre-snap & post-snap reads. These changes have made the play much more productive and harder to stop. Here are the 4 options that we give the QB on this play; 3 passing plays, and 1 run play. All are run out of a 3x1 formation.

First, we are looking to either run a slant, hitch or go to X. This is signaled between the WR and the QB, so they are on the same page. They make calls every play, whether they are live/dummy calls.

The first pre-snap read that our QB looks at is for the FS on the single receiver side. If he is anywhere from the center over towards the trips side, the QB will look to run one of the above routes with X. If a slant route is signaled, the QB will look at the pre-snap position of the Will linebacker to his side, and can override the WR call.

If the FS is located on top of the BG or closer to X, the QB will not use that option. Instead, he will focus on his stick reads.

The QB will get a pre-snap look at the positioning of both the Mike (PILB), and Sam (POLB). When the ball is snapped, #3 runs a stick between Mike and Sam, and #2 runs it between Sam and the Corner.

3rd Option:  RB Swing to the Trips Side

One wrinkle we have added is to swing our RB to the trips side. This really puts the defense in conflict, as they really can’t cover the back, and the double sticks at the same time. We kind of treat this as a safety valve for the QB.