The concept of this report is to provide a handful of drills that I use for our quarterbacks to help keep them consistent with their RPO techniques. I believe these drills help train the quarterbacks eyes, rhythm, and delivery during our called RPOs. In our system, the quarterback’s eyes must first take him to the correct area on the field with the defenders for him to read. At the same time, he must get into the rhythm of the play and mesh point with the running back. From there, the defenders will tell him when and how to deliver the ball.

We have general rules for the delivery of each RPO, but all are subject to change based on the leverage of the defender. Any routes thrown as timing routes to the sideline (hitch, quick outs), we want delivered as possession throws towards the sideline. We will take the 5-7 yards and move on to the next play. If the receiver can break a tackle or make a defender miss, that is a bonus for us on these types of RPOs.

In a similar fashion, routes that work off the LBs or make a more aggressive path towards the tackle box must be looked at as possession throws with a chance for an explosive play. With more defenders in the middle of the field (linebackers, strong safeties, drop-down safeties), we want these throws delivered as body throws. We want the ball in an area on the receiver’s body so he can protect himself if needed, but also helps the receiver catch the ball with confidence in both the QB’s read and the opportunity to turn this into an explosive play.

We us a systematic approach to setting up our RPO read drills. During the early stages of fall camp, we will install the basics of our offense as well as going against basic looks from our defense. So, I try and use individual time to work on some of the throws I have seen our quarterbacks make in the past and adjust the individual drills from that point. During the season, we will only work the RPO reads and defenders we are trying to manipulate based on the game-plan for that week.

I use this drill early and often during pre-practice in fall camp. It helps the quarterbacks understand how fast we need the ball thrown in certain situations, while also placing a premium on accuracy.

For this drill, there will be a center (usually me to control the tempo), quarterback, and stationary receiver (usually a QB, during pre-practice I try and get the receivers catching depending on their pre-practice schedule). Each quarterback will get 5 throws in rapid succession to one of our quick screens (I generally try to throw only the screens we have called for that practice plan). The center will snap the ball, quarterback will throw the quick screen, and almost as the ball leaves the quarterbacks hands the next snap is coming. If you have your receivers catching for you, have them tuck the ball away quickly and then relay the ball to a quarterback waiting his turn. I will have the QBs work quick screen throws into the boundary, from the middle of the field, and to the field (while working throws to the left and the right). 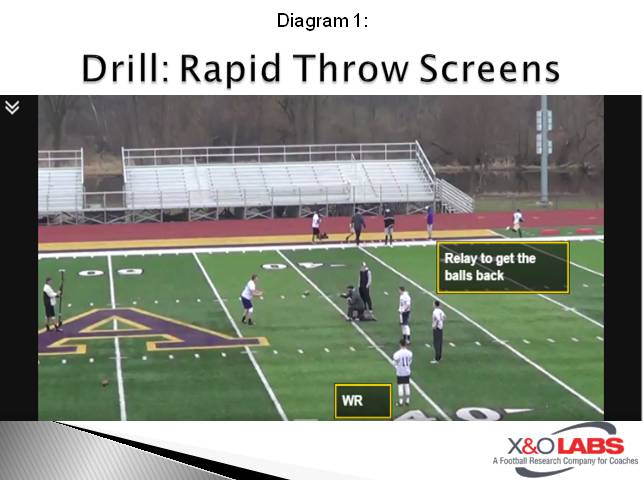 This is a simple set up for a pretty simple drill. Again, this is to get the quarterbacks used to getting the ball out of their hand quickly when we get a pre-snap read to throw the ball.

WHY: The defense aligns in a manner that gives us an automatic throw read to the screen (both LBs in the box and we have them out numbered on the perimeter). The ball needs to be snapped as quickly as possible and the quarterback must get the ball out of his hands as quickly and as accurately as possible.

FEET: I talk about “setting the pitcher’s mound” or “set the mound” when getting my quarterbacks feet aligned. Just as a pitcher sets his back foot on the mound parallel to the catcher and pushes off the mound with his back foot to throw, I want a similar set up with my quarterback’s back foot set parallel to his target. This task becomes a much more conscious effort and involves more discipline when a right-handed QB is throwing to the right and a left-handed QB is throwing to the left. In both scenarios, they must work hard to “set the mound.”

THROW: I talk about two aiming points with the QBs when it comes to throwing our quick screens based on our receivers. For two of our screens the receiver’s chest will be facing the QB. During these throws, I talk about aiming for the up-field shoulder. This gives the receiver the ability to get a little momentum towards gaining positive yards. When running a true bubble screen or swing screen, I talk to the QBs about aiming for the front of the facemask. This keeps the ball in front of the receiver so he can catch the ball while continuing to gain width and keep their momentum going towards positive yards.

RIDE AND PULL: There will be times the defense gives us a look where the quick screen throw may come during or after the mesh point with the running back (ex: LB maybe walked outside of the box or we must see how the perimeter sorts itself out). We do this drill two different ways; with and without a running back. I usually just have the QB visualize the scenario and why we are doing this drill.