Researchers' Note: You can access the raw data - in the form of graphs - from our research on the Diamond Formation: Click here to read the Statistical Analysis Report.

You’ve seen both the Pittsburgh Steelers and Green Bay Packers showcase it in front of millions of people in last year’s Super Bowl.  Then you saw Bob Stoops at Oklahomatoy with it in Norman.  Finally you saw former Oklahoma State offensive coordinator Dana Holgorsen bring it to a whole other level and dice defenses in Stillwater.  It was "score at will" time for the Cowboys, propelling Holgorsen to his first head coaching job - now he’s doing it at West Virginia. So, chances are by now, you are familiar with at least the structure of the diamond formation (Diagram 1), but have you had the gaul to use it? If you’re like most of the coaches we spoke with, you’re still hesitating on dipping both feet in. 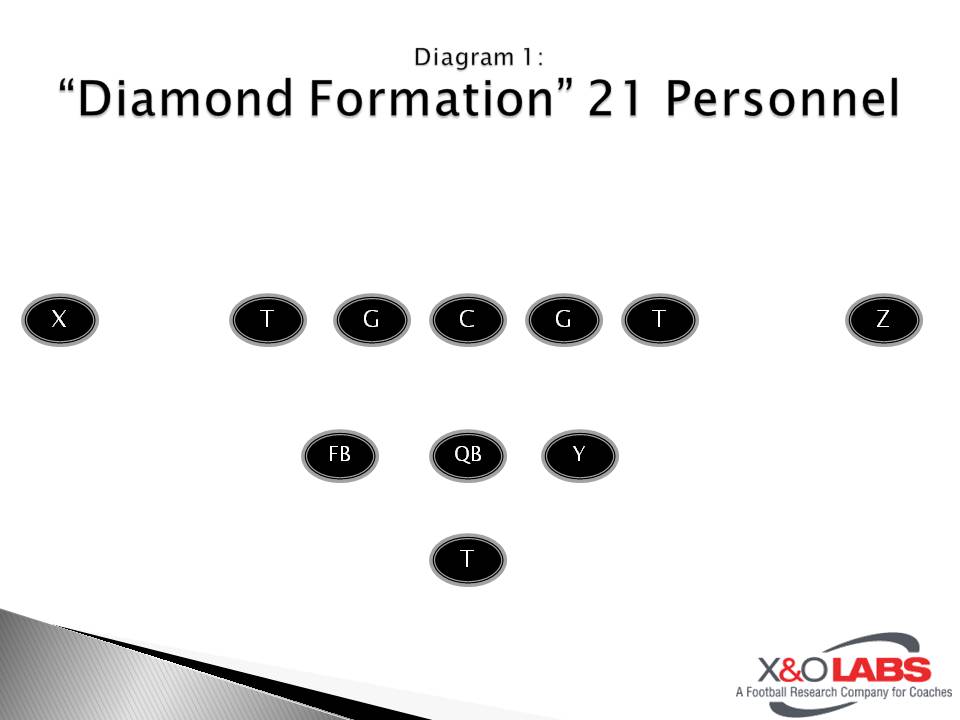 In fact, when we distributed our survey on the diamond formation to over 10,000 coaches we asked that only those that use the diamond formation respond…356 hit us back.  Now we realize that it is clinic season, but that number should be a good indicator of how many coaches still have not incorporated the diamond formation into their offense.  What’s more is that of those 356 coaches, 57.3 percent of them use it in less than 10 percent of their offensive schemes.  Probably the most telling facet of our research was that of all of the coaches that use the formation said they will use more of it next season.  If that’s not a testament to its value, we don’t know what is.  But again, we’ll try to be unbiased in producing the following research - even if our coaches can’t.

When asked why they’ve decided to utilize the diamond formation, we got a laundry list of benefits.  These are in no particular order.

Benefits of Using the Diamond Formation:

Get Our Upcoming Research Report Revealing Pass Game Strategies in the Diamond Formation. Enter Your Email Address in the Email Sign Up Box in the Right Hand Margin of This Page >>>>>> Above Our Facebook Fan Box.  It’s FREE!

We’ve found that when using the Diamond Formation, 49.4 percent of coaches will mainly run out of this set 75 percent of the time.  While there are several opportunities to throw the ball, there is no question it is a run-first formation with lethal play-action possibilities off corresponding run actions.  In the survey, we inquired about personnel and which is more suitable for running this formation.  We’ve seen both: we’ve seen the Oklahoma State’s of the world run it out of 10 or spread personnel while professional teams like the Carolina Panthers used more 21 personnel with the addition of an H-Back.  When our survey concluded, we noticed that 42.5 percent use 21 personnel while 37.3 percent use 10 personnel - these were the two personnel groupings of choice based on our coaches.

Tom McPherson, the head coach at Ridgeview High School (FL) uses both 30 and 10 personnel groupings in his diamond formation.  When he’s in 30 personnel, he’ll have three viable backs (two sniffers and one tailback) to run his power and kick run game as well as his isolation run game.  He’ll cheat his sniffers up to two yards from the line of scrimmage so they can get to the point of attack quicker.  "We’re a no tight end team, so we have a hard time handling seven in the box," said McPherson.  "Now we can kick and wrap our sniffers and have seven blockers in the box.   Our traditional diamond set is the only three back set where I use 10 personnel.  I think in terms of bigger backs or smaller backs. Changing personnel helps with practice planning because I’m not going to do any jet sweep meshes with the big backs, only with the smaller skill kids in 10 personnel.  I won’t ask a big back to be the jet sweep guy.  He will only be the power guy."