Introduction:
This past year we felt we had two good running backs who could carry the ball and a quarterback who was a dual threat and had the ability to make decisions within the game. We added a 20 personnel shotgun split backs formation to our offense which we call our pro formation. Out of this formation, we developed a run/pass option play in which we could run an outside zone and combine it with some backside receiver option routes. We like this formation because we feel like we can run the outside zone to either side of the formation and have a good run play based on our quarterback’s pre-snap alignment reads, but also have a backside throw possibility off our receiver’s pre-snap alignment read of the defense. We feel as if this play will then open the field even more for our offense because we have several complimentary plays that we can go to off this base play to take advantage of the way the defense plays it. 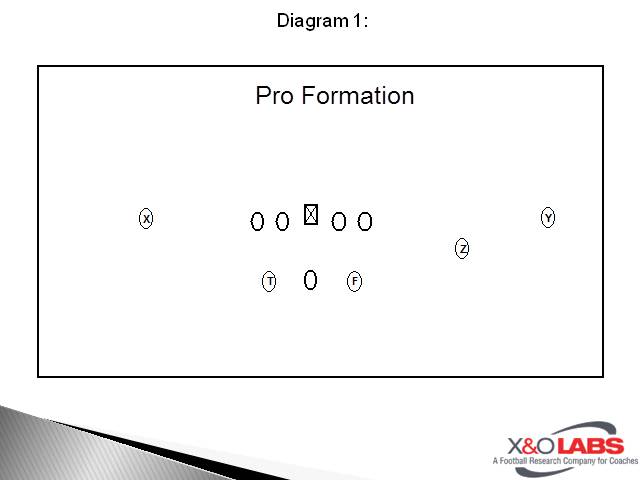 Outside Zone Post/Go RPO:
The outside zone is not our best run play but the action of the outside zone gets the defense to move horizontally opening up space on the backside of the run play.  The outside receivers (X & Y) are reading the alignment of the cornerback to determine their route. They make the decision on what route they are running, and they communicate their route to the quarterback and the Z receiver. We want to run the post, but if we have a corner who is playing heavy to the inside (2 to 3 yards or more) with off coverage (5 yards or more) then he will run the go route.

It is the same read versus press coverage, which we don’t see much of, but because he is tighter we can now say that if he is playing your inside shoulder run the go/fade otherwise run the post. The receivers must also consider the flow of the game as they make their decision. An example of this would be if a cornerback is continuously playing 3 yards inside and we have ran the go several times already, it would be smart to mix things up and run a post. The importance of good route running comes into play in order to be able to do this. The receiver must be good at setting up his defender.

Zone Strong RPO:
Against a 1 high safety we are going to run the outside zone to the strong side of the formation (Diagram 2). 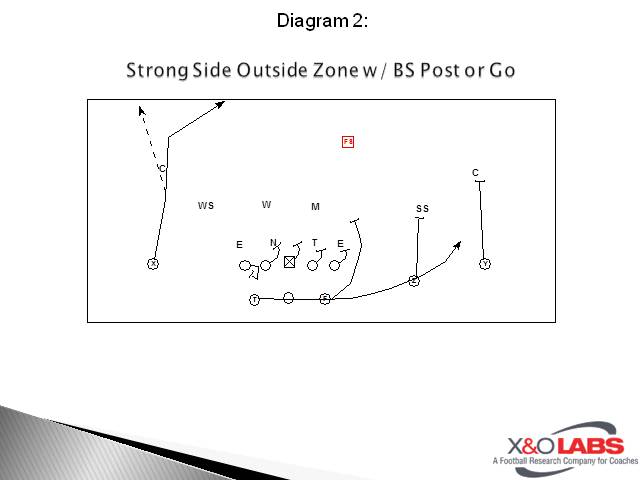 Player Assignments:
QB: Pre-snap check the route of the X receiver and the location of the safety. Post-snap get your eyes on the safety, step back with your back side foot then take two shuffle steps as you ride the mesh with the TB. If the FS moves back side or stays in the middle give the outside zone to the TB. If the FS moves to the outside zone pull the ball, set your feet, and throw the post.

TB: Turn, open and lead with your inside foot first and run to the sideline across the toes of the QB.  If the ball is not there or the QB pulls it out then the QB is throwing. Carry out your fake. After you receive the hand off get outside and read the blocks of the Z and the Y.

FB: Lead for the TB around the end up to the ILB. If the OT needs help hooking the end then double team first before getting up to the ILB.

Z: Block the OLB. Run at him like you have a route. Do not run inside of him; stay on his outside. Break down 3 yards away from him, mirror him till contact then try to work to the OLB’s outside armpit to seal him in. Keep a wide base with your feet chopping and your hands inside.

Y: Block the CB. Run at him like you have a route. Do not run inside of him; stay on his outside. Break down 3 yards away from him, mirror him till contact then try to work to the CB’s outside armpit to seal him in. Keep a wide base with your feet chopping and your hands inside.