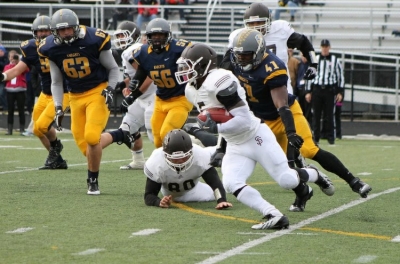 It is astounding how universal the Power Read play has become in such a short period of time. This new innovation has changed the run game at every level of football and has become one of the most trusted weapons in the arsenal of many offensive coordinators. For a long time, it was almost like stealing every time an offense called this play. The defense couldn’t be right! Of course, the guys on that side of the ball are good coaches, too, and have started to catch up. Defensive coordinators have lots of new tricks to stop this play, especially if offenses become over-reliant upon Power Read. That is why we at the University of St. Francis (IL) now utilize the complementary Trap Read play.

At St. Francis, we had become a big Power Read team. Our quarterback was an excellent runner and we felt the play fit our personnel. Our main two ways of running the play were out of 20-personnel or with some sort of Jet motion. For the purpose of simplicity, my diagrams will be mostly out of the 20-personnel set. We prefer to run the Power Read to an open side (with no tight end attached to that side of the formation), so that we can read someone who is closer to the quarterback. We feel that this makes the read easier and quicker for the quarterbacks and reduces the “gray area” of the play. We have always had the rule “give… unless” for all of our read game, whether in Zone Read or Power Read. We want the ball to be handed off unless the quarterback is sure that his read will make the tackle. Then, he can keep it (Diagram 1). 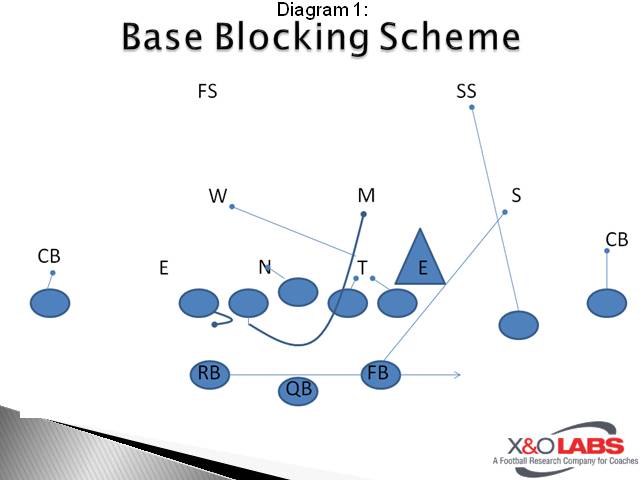 Why the Trap Read Instead of the Power Read?

We had tremendous success with this play for a long period of time. As I mentioned in my introduction, though, defenses began to understand the play better and now do things to take it away.The biggest problem was when the defensive end would tackle the dive (in this case the quarterback) and the play side linebacker would scrape over the top and chase down the give. This requires tremendous discipline by the defensive end to always do his job and come flat down the line every time. But, as the Power Read play has become more popular and defensive coordinators have dedicated more time to practicing their defensive responsibilities, they have also become better at this defensive technique. This was especially problematic whenever we would run Jet motion, a crucial component of our offensive system. The linebackers would already be moving naturally with the flow of the motion, which allowed them to get a running start. As long as the defense had a good athlete at the play side linebacker spot and correctly executed their responsibilities, they could limit the amount of success we had with this play. We would “crack” the box with our receiver to that side. This enhanced the effectiveness of the play (Diagram 2). 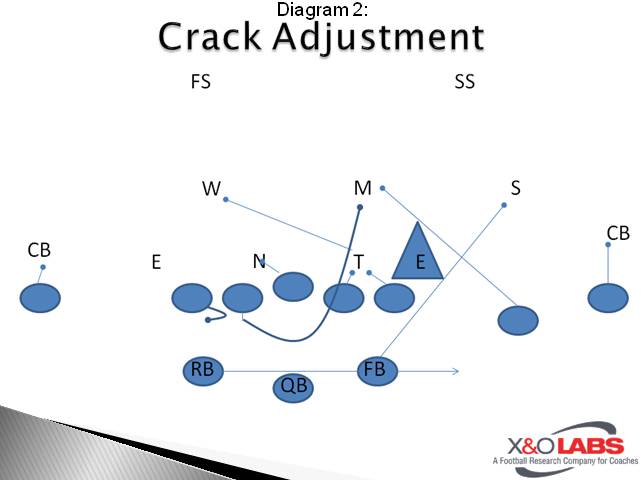 As we continued to run the play, linebackers got even better at shooting the gap and attacking the outside give. Sometimes they would scrape so tight to the edge of the box that our slot receiver could not get there. There were times where we did block him but it would happen so close to the runner that it would bounce the play outside and allow the rest of the defense to rally and make the tackle for a minimal gain.