The power concept is to Midwest football as five octave harmonies are to Mariah Carey. It’s tied into the culture, born out of the necessities of pounding the ball in colder climates at the end of the year. So, when Scott Fuchs took the offensive line position under former North Dakota State head coach Craig Bohl, let’s say it was “suggested” that he learn the nuisances of how the Bison were running its A gap power play. Now nine years later at the University of Wyoming, Coach Fuchs is still finding ways to gut defense by getting the play to run as north to south as possible. And he’s doing so by coaching his linemen, and the back, several techniques to enforce an A gap entry point. 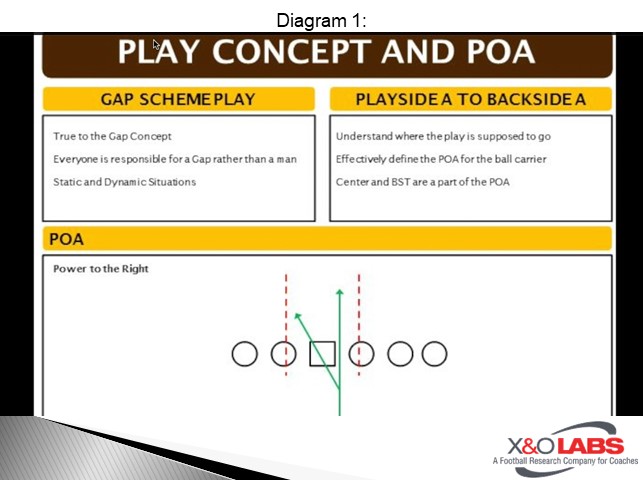 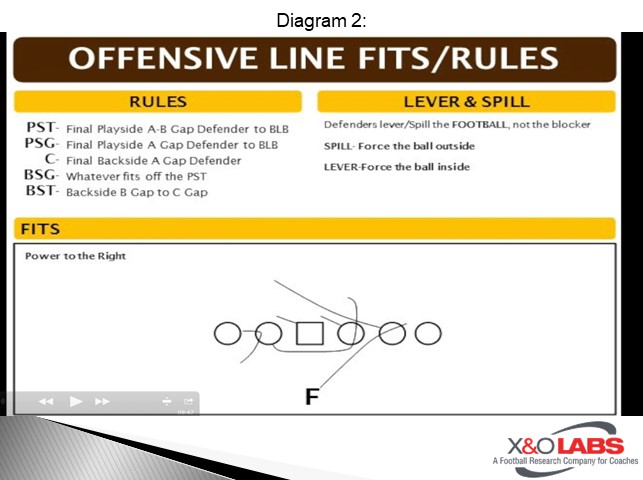 The focus of this report is on Wyoming’s “baby,” the A gap entry power concept, which coincides the lateral double team. While this concept is certainly not foreign to most programs, Wyoming does supplement it with a C gap power play. “We use the C gap play if our FB is getting his butt spilled, then we will take it outside,” said Coach Fuchs. “We want to make them defend the A gap first which makes them more vulnerable to the C gap scheme. We need to have the C gap play ready if they are filling it.”

But in order to utilize both versions of power, Coach Fuchs has to use two different types of combination blocks to the play side, a lateral combination block and a vertical combination block. “When we run the A gap power, the play side guard may be the climb player for the backside linebacker (Diagram 3) whereas in the C gap play, the tackle is expected to be the climber (Diagram 4). “On the lateral double team, the post blocker is making sure he’s in the center mass area and the hip area of the down defender,” said Coach Fuchs. “If he’s hitting the shoulder pads, we tell him don’t bother. If the guard has to climb, the backer is going to be over the top and making the play in the C gap or wider and can’t make the play. If it’s not going in the A gap, we prefer the tackle to be the climb player for the linebacker on the double team. That gets us into the vertical combination scenario.” 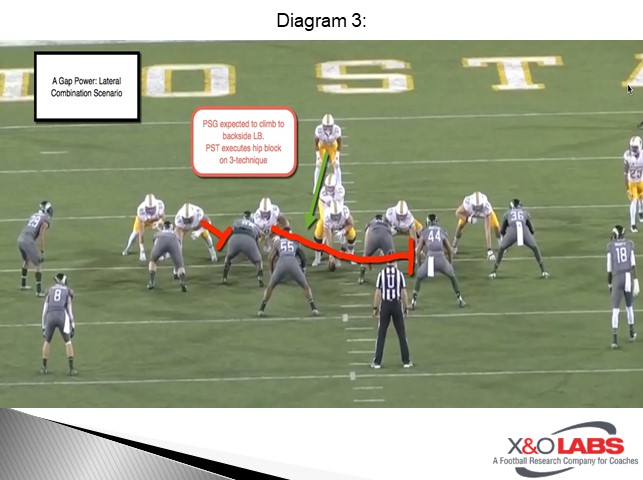 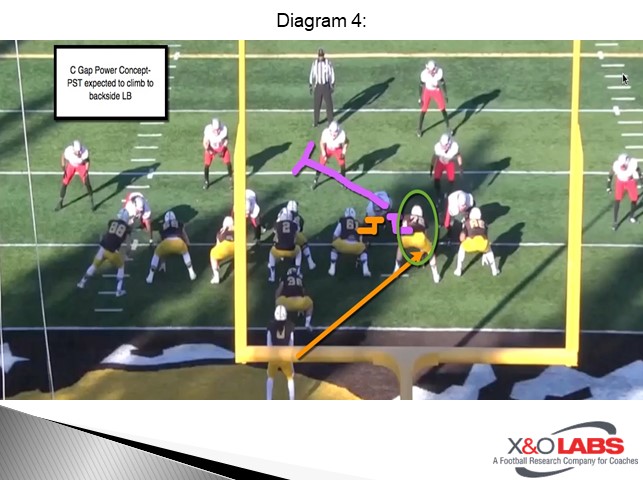 Coach Fuchs details the difference between both these combination blocks below: 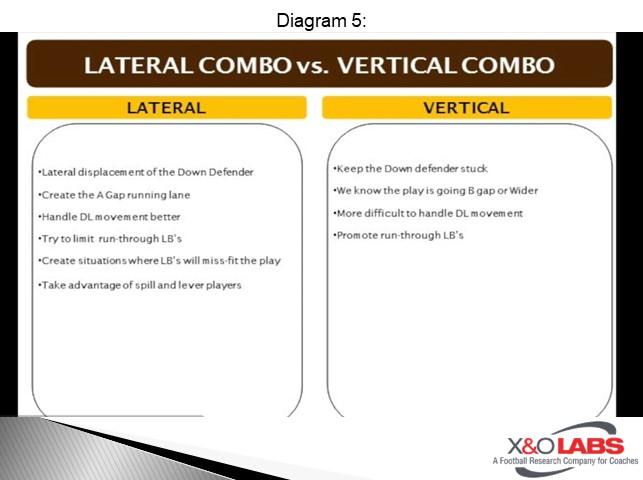 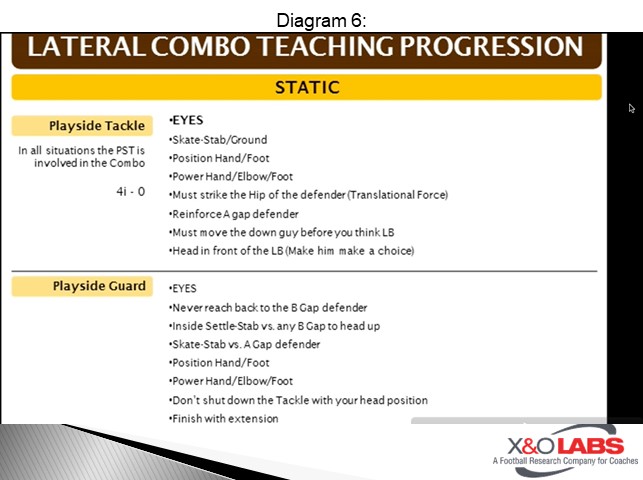 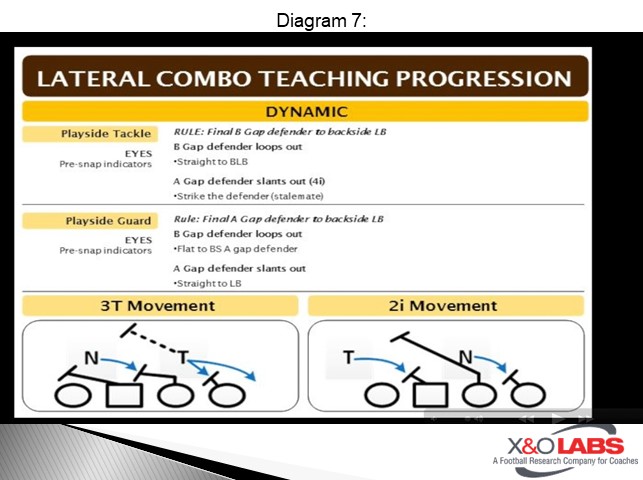 Skate, Stab and Ground Footwork for Play Side Tackle

In order to create the horizontal push needed to clear the play side A gap, Coach Fuchs teaches the play side tackle to use what he calls “skate, stab, ground” footwork. “I got sick of teaching types of steps on double teams, so now we teach a full body movement,” Coach Fuchs told us. “We used to call it an ‘open’ step but we had problems with getting our hips too extended and falling down. We had to widen the base in some way. So, skating to us this means driving my right foot away from my left foot. I’m not actually picking my right foot up and taking a step. I’m driving it away from the other foot, like ice staking to use your blade.”

“Grounding means keeping our feet as close to the ground as possible, because we cannot get overextended,” said Coach Fuchs. “The ground is about position and the stab is about power, the angle that they need. The stab is about striking the defender and accelerating.” The stab and the ground come simultaneously. “For example, if I’m the right tackle, I would take position with my left foot so I’d skate and get my other foot in the ground as quick as possible because that is when I’m striking the guy,” said Coach Fuchs. “The goal is to put both feet in the ground and had more power like a power clean. Both feet would instantaneously snap to the ground. We brought more power to the double team with two feet in the ground.”

To study drill film of how Coach Fuchs teaches the Stake, Stab and Ground technique, click on the video below: