Our offense at Lee-Davis High School begins with our running game. Our main staples in the run game include power, inside zone and outside zone. We have been very effective in our ability to run the football in recent years. Much of the success of our ability to run the ball is largely due to our play action passing game. Our goal with our play-action passing game is to put run defenders in as much conflict as possible. We want to slow defenders down as much as possible. Our most effective play action passes are off of our power play and inside zone play. Our philosophy is to be able to run these concepts from multiple formations.  We spend a great deal of time in the off-season and during practice teaching the fundamentals of these concepts.

The play-action pass that we use frequently comes off of our power run play which is our 100 series.  We have the ability to use multiple pass concepts with this play-action pass but the concept we use the most is Flood.  This is a basic flood concept.  In our offense, we teach the flood concept the following way (Diagram #1). 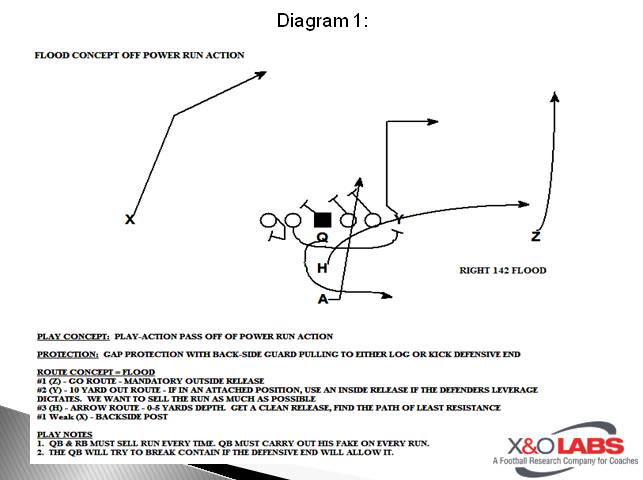 This allows us to use the flood concept in any type of pass action we choose. (play action, sprint out, or drop back).  We can also add tags to the concept if we want a specific player to run a certain route.  Our play action pass off power is called by stating the Formation, Protection, Run-Action, Pass Concept in that order (ex: Right 142 Flood or 143 Flood). 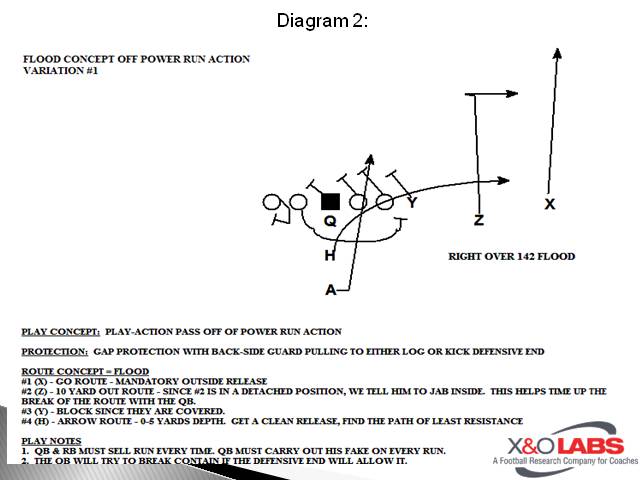 In this play, our QB will attempt to break contain and throw on the run.  The only situation in which he would not try to break contain is if the DE to the play-side is up the field not allowing him outside.  In this case, he would pull-up and deliver the ball accordingly.  The progression for the QB is deep, middle, short.  We are looking for big gains in the play-action game but we tell the QB not to pass up player who has green grass in front of him.  We do not try to attack a particular coverage with this concept rather than attacking defenders that are assigned to playing the run and pass in their responsibilities.  The player that typically is most effected is the flat defender.

It is important to note that sometimes QB’s will fall in love with the short throw and not look down the field. We will drill the progression of the play during practice.  Our focus in doing this are the fundamentals of the play. We want to make sure the QB is getting proper depth off his fakes and his ball handling mechanics are sound. We also stress proper route depth and releases by the receivers.  In the drill we will also add the pull of the backside guard and vary his block to force the QB to make his adjustment to his launching point.

The protection for this pass concept is a gap protection in which we do pull the backside guard. We have protected the play both ways in that we pull the backside guard and sometimes we do not.  This is typically a game plan decision. The pulling of the backside guard makes the play look more like the run thus having more influence on the defense. The protection is as follows, the offensive line will step down aggressively and block the first defender inside that shows. Offensive lineman will step aggressively with their inside foot and block the first defender that shows on their path.

We like to call this play versus hard crashing DE’s, hard filling safeties, and OLB’s that are getting too involved in stopping the run.  We are not as concerned with the coverage the defense is playing when we call this play.  Our main goal is the affect the defenders that are making the tackle on the run action.