Every team I had ever coached was a spread based team. We ran several RPOs, several different Quarterback read plays, and crazy spread formations to catch teams off guard. With every year that our staff ran these plays, we noticed that the defenses were getting faster. Running backs and Wide Receivers were lining up on the defensive line, safeties were playing linebackers, and defensive units were loading up with speed.

When I arrived at Newton Falls, I realized we couldn’t combat this trend and match the athleticism we we’re seeing on Friday nights. Our team speed wouldn’t allow for it. We needed a new way to package what we have done for years including the north south run game. In the end, we took some aspects from old school power football offenses and applied some new methodology spread / RPO methodologies. This has given us the needed firepower to fight back against the faster, modern defenses.

One of the things we’ve had great success with has been taking the idea of a RPO plays and packaged plays from the spread and adding it to our I-Formation and Pro-Style packages. When you run a lot from under center you tend to play defenses that do one of two things; play press man on you and blitz the house or run a zone on you such as Cover 2/Cover 3/ Press Quarters to help safeties be more active in stopping the run. One way we combated this was with our I-Stack ISO or Power Shark play.

We have run this play as both an RPO and a packaged play depending on the ability of the QB to make the read. This past season we used it as a packaged play where the Quarterback would decide based off defensive alignment what we would run. The formation we like it out of the most 21 personnel I formation with stacked WRs.  Opposite of the tight end, we spread our X out wide and have our Z stack right behind him.  This formation creates difficulties for defenses and forces them to make some adjustments. 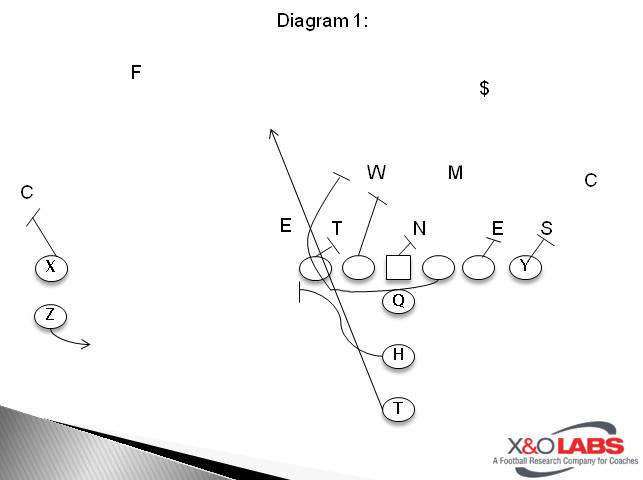