The best offensive coordinators always seem to have the answers to any defensive scheme or adjustments that they see. If those same OC’s possess individually great athletes and players, they can create matchup nightmares that are virtually unstoppable.

At St. Anthony’s HS we have been blessed with some great athletes and players in the past. The best and most versatile way, in our opinion, to create mismatches with these players is by using and operating out of a spread offensive system. Our pre-snap run pass combinations or post-snap run-pass options, from the spread, allow for multiplicity but simplicity (to borrow Gary Patterson's defensive terminology) in play calling. It allows us to eliminate confusion up front by simplifying run schemes and simultaneously eliminating pass protection confusion. The spread allows for greater versatility in pass game concepts that traditional misdirection offenses do not. They offer the ability to stress defenses on the first, second, and third levels as well as from sideline to sideline all while utilizing one play call. You can attack through the air like Mike Leach’s Air Raid or on the ground in a power spread like Gus Malzahn’s power spread. Simple personnel changes and formation adjustments can help to further provide offensive advantages while limiting defensive looks.

One of the ways we simplify the looks that we get from the defense is by using TE Empty formations, especially when facing odd fronts. This article will focus on some of our answers to an odd defense which is through 11 and 12 personnel Quads formations. 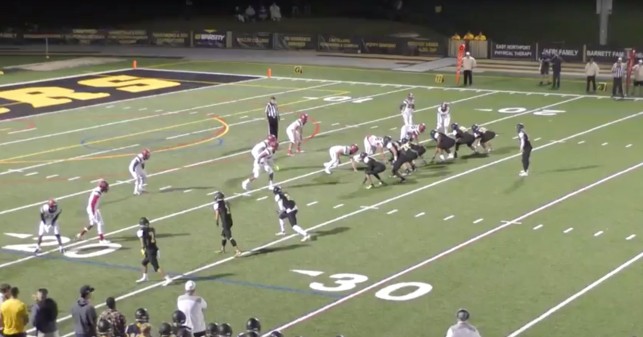 This season we found that you can dictate to the defense the one look you want to see or at least one of a couple of looks that you will see. You must be multiple in offensive formations and incorporate a TE. THERE IS A FINE LINE WITH BEING MULTIPLE in looks and keeping it simple. We will share one of our simple install methods to implement an 11 (or 12) personnel quads look to your spread.

What we discovered this past season was that if we lined up in a somewhat non-conventional formational grouping the defense would be forced to give one standard front/ coverage, most times. That simplified and made it easy to install, block and execute against. We gained this advantage by using the 11 and 12 personnel quads formations. This is especially useful against odd fronts. Because of increased popularity and our utilization of RPO's into our offense, we very often see odd-front defenses. More on our RPO's and RPC's in the upcoming paragraphs.

Diagrams 1 and 2 show our basic 11 and 12 personnel Quads formations. 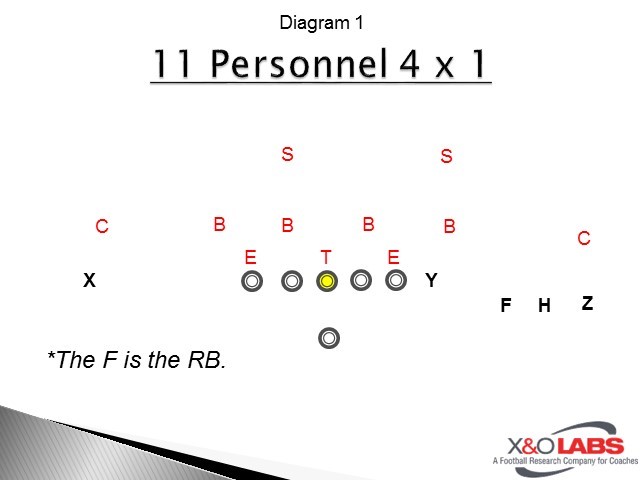 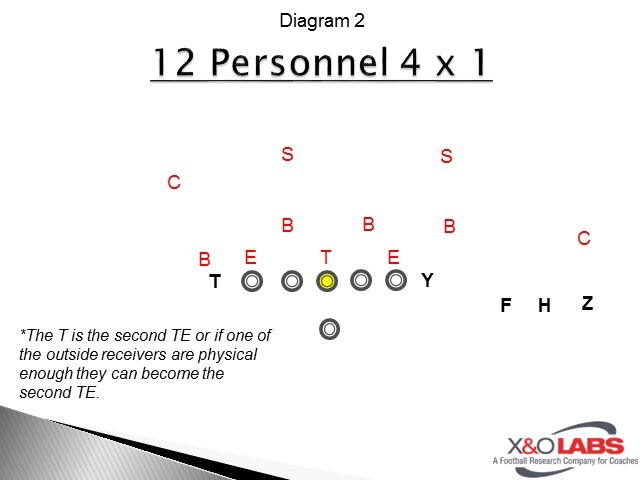 We believed that by giving the defense a somewhat unconventional formation, while using a versatile TE (or 2), we would likely see a standard defensive alignment. Any defensive coordinator that has time to prepare for this package will be able to align to it, however, we hoped that they would spend an excessive amount of time on it while we ran our base run/pass and RPO concepts from it.

In diagram 2 the defense is forced to fit 8 gaps in the run game while still having to account for the 5 eligible receivers. (2 A Gaps, 2 B Gaps, 2 C gaps and the 2 outside D’s).  The more gaps, the more run fits which require more defenders to be sound in their assignment.

We have found there are countless benefits to spreading the defense out using an Empty backfield and 11 or 12 personnel Quads to a side. Quads, for the sake of this article, will be four receivers with a TE to one side of the formation. Some of the ways it's effective are:

Our run game consists mostly of 1 back, zone and gap scheme, read runs with RPO’s attached. We can, and do, run any run scheme out of Quads and several passing concepts out of it. The first thing we will discuss is the top formations we run using one or two TE's from Empty as well as personnel adjustments or packages. Before we share some run-pass combinations (RPC) and run pass options (RPO) from our 11/12 Quads formation we must first define and /or review some terms.