We have been running Sweep (Pin & Pull) from the Shotgun since 2002, initially Q Sweep and over the years we have expanded it to RB sweep with an RPO. We run it from Pro (12) personnel with a TE and H-Back. We do not huddle and run a variety of formations, including unbalanced. Over the past 7 years at Ocean City (NJ) High School (a Group 4 school) we have built our offense around Sweep. In 2020 and 2021 we ran Sweep an average of 11 times a game and were 64% efficient (our goal is 60% and consider 55% good). In addition, we have run inside zone 14 times a game and have been 70% efficient running it in the past two seasons.

When game planning, it starts with Sweep. The first questions we ask ourselves: How will they defend us and what are our best looks to run Sweep? We are no different than anyone else since Amos Alonzo Stagg: we are looking to outflank the defense. Initially, we look at the TE/H side formations (Wing & Trey) and try to predict how teams will defend those two. 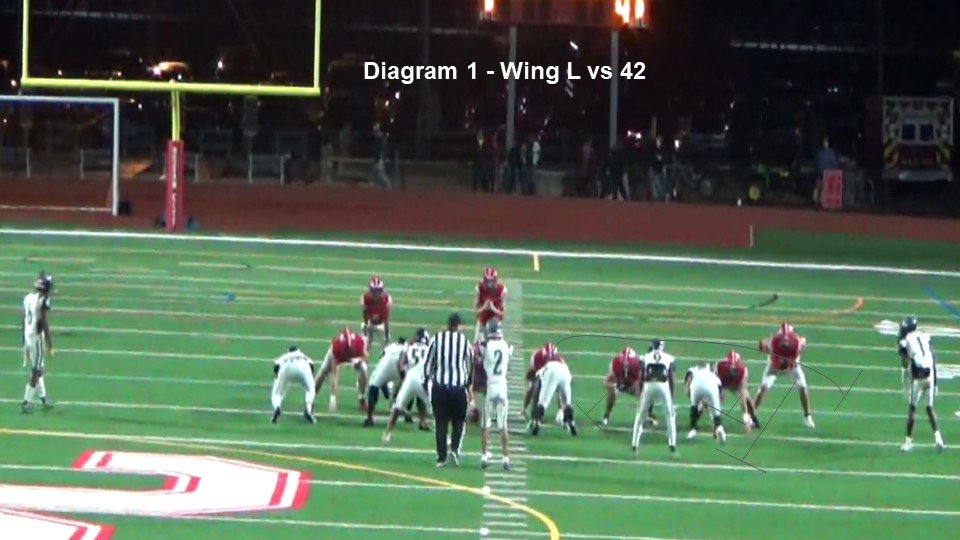 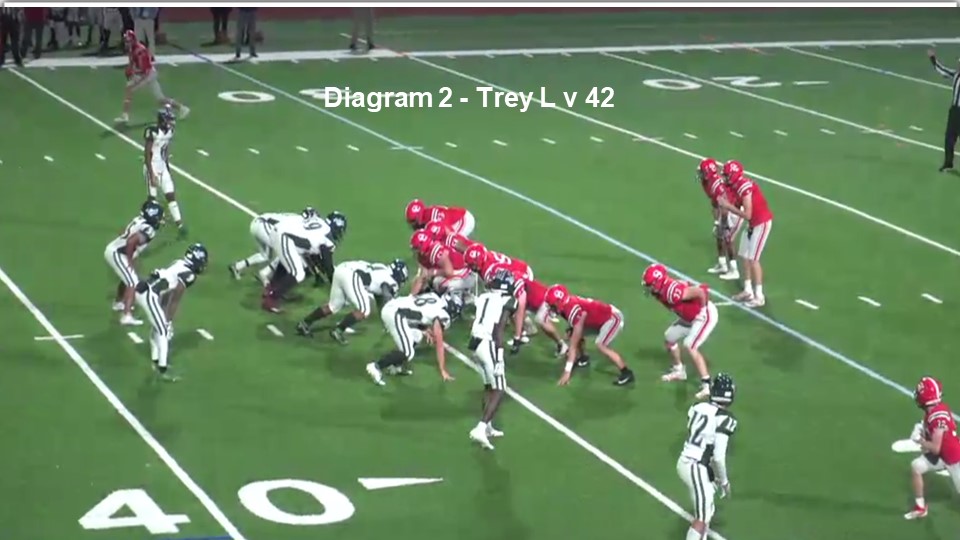 If a team plays a defender inside of the TE and just a force player outside the H (as in Diagram 1), then we will run Sweep there until they stop it. When we RPO from those formations, we instruct our QB to give the ball to RB every time when there’s a weak side alley and Free Safety, since they do not have enough defenders to stop the sweep (great LBs or 7 tech being the equalizer). To protect Sweep from Tight End/H formation, we run inside split zone, or bluff/raise to split end side forcing the defense to have numbers on the weak side. Additionally, we run Counter-Gap away from Tight End/H and Trap to Tight End/H. 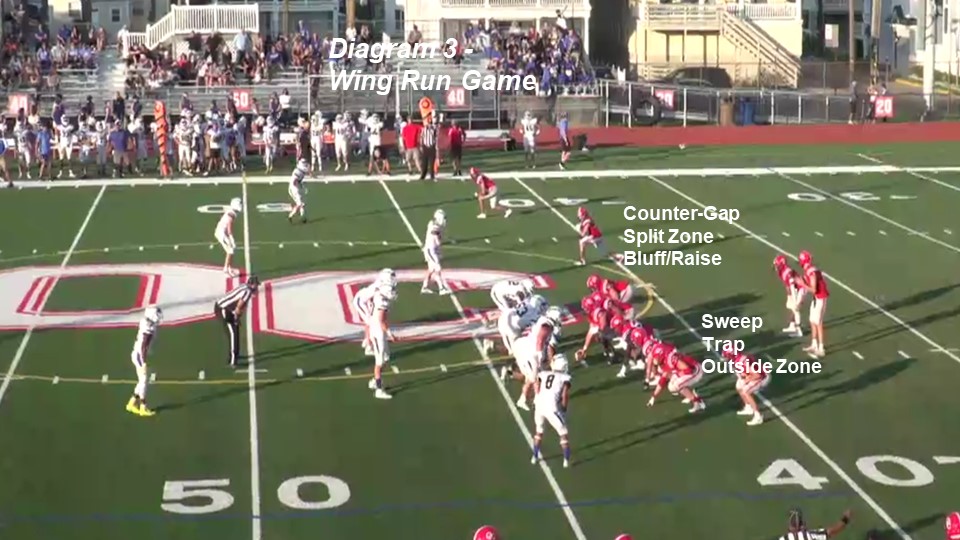 Finally, from strong backs we will run Inside Zone (Duo with a read and our most efficient play over 7 years), Toss, QB Sweep to Tight End/H and away we run zone opposite, Trap, Counter-Gap and at times Power Read. 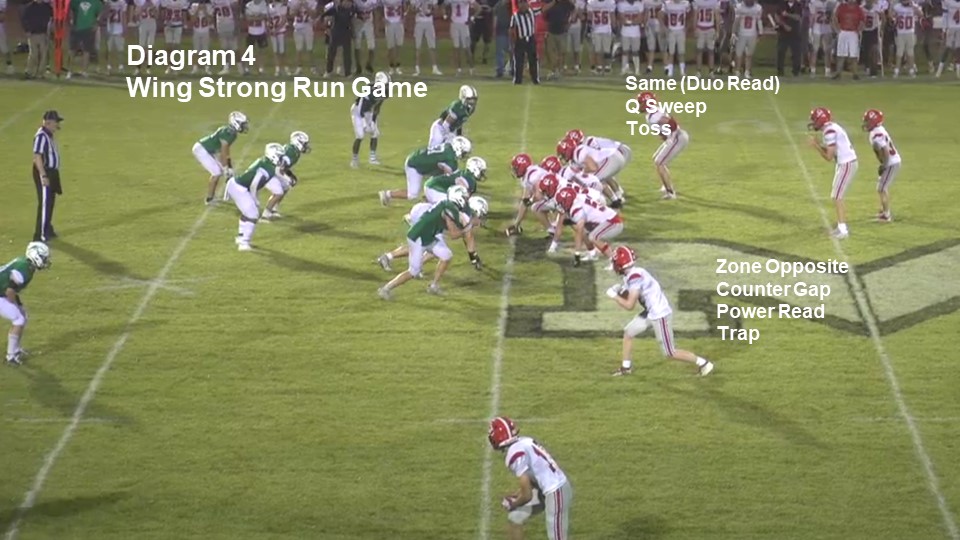 Of course, we have to throw the ball to keep a deep safety in the middle of the field and a DB over each WR. All of these plays are essential in our planning to protect Sweep and to compliment the play. Years ago, I read the book Vince Lombardi on Football and discovered the ways Coach Lombardi ran the complementary plays to Sweep but as he stated so well at his first install in Green Bay “Gentlemen, if we can make this play work, we will run the football.” 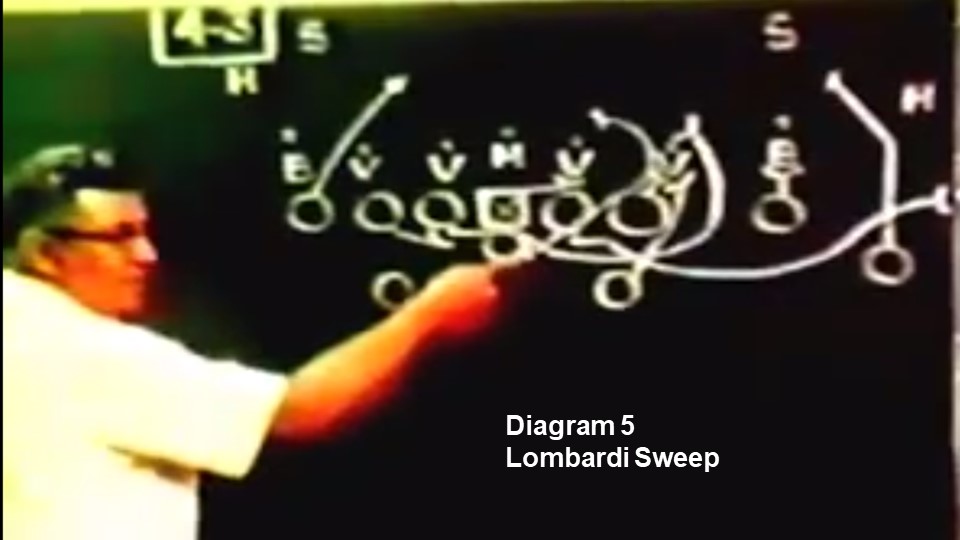