Adjusting Your Nakeds to Attack Coverages 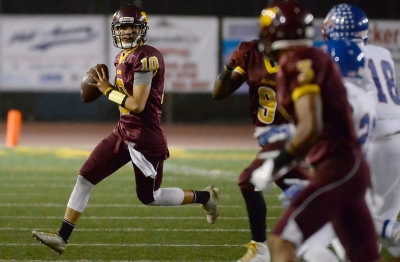 For over 20 years, the inside zone and outside zone have been the primary run plays used in our offenses. One problem with zone based offensive teams is that they often have significant run tendencies based on specific formations, strength, or direction. Over the course of my career, I have found that one of the great ways to break tendencies is to use misdirection pass to keep defenses off balance. One of our favorites is the naked bootleg concept. Over the past four years, our naked bootleg package has accounted for 50% of our play action passes and nearly 30% of our total passing yards. The beauty of this concept is that it works against any coverage at anytime from anywhere on the field. Here is a look into what makes this play work so well.

The offensive line and tailback are where the zone boot concept begins. If those six players do not sell the run, we will not be able to make the bootleg concept work. For that reason, they are told that their sole purpose on this play is to sell the run. Since this is a naked bootleg we are not relying on the offensive line to provide any stout physical pass protection for our quarterback. This allows our OL and TB to carry out their individual run blocking assignments with full conviction.

Since it is a pass, it is critical that the OL does not extend their blocks up to the second level. We teach them that they should work to extend the play laterally instead of vertically in order to really sell the concept. As part of this technique, they are taught to run through the outside shoulder of the defender on the play side of them. We also teach the TB to sprint to the sideline and bury himself in the offensive line. This exaggerates the flow of the play to the sideline and forces the defense to react.

QB Footwork and Fundamentals within the Zone Bootleg:

Like the offensive line and running back, the quarterback must do his part to sell the zone. Here are a few key areas the quarterback needs to focus on to make this an effective concept:

Selling the fake to the running back: If the quarterback is under center, we teach him to follow the TB with his eyes for a split second. This will attract linebackers and safeties who key on the eyes of the QB. If the QB is in the shotgun, he should slide with the running back keeping the ball seated in the TB’s belly for as long as possible.

Depth & Snap: The QB must get depth away from the line of scrimmage (LOS) and snap his head around to find the unblocked DE. The depth will allow for some extra time to snap his hips around and get the ball off if necessary. It also creates separation from the DE allowing him to get around him to the outside.

Attack the LOS: The QB must make himself a run threat. This puts a strain on the defensive coverage and also creates indecision for linebackers.

Our philosophy for the quarterbacks read can be paraphrased as “dump and run.” Our number one goal is to get the ball in the hands of the player in the flat as quickly as possible. That said, it is not always possible, so we will have a deeper throw option for the QB to execute a high/low read on a specific defender.

We limit our QB to two throw options before he uses his feet as a weapon. This is done to encourage him to make a quick decision. He cannot hold onto the ball and take a negative play. The throw options are coverage and call based. The QB will understand that if we have tagged the X receiver to run a go route his two throwing options are the flat and the TE across route.

Our base bootleg package is initially installed out of the I formation and 21 personnel. I have found that installing it from this group makes it significantly easier for us to adjust the responsibilities of specific players for later options. When we are in 21 personnel, we see a lot of 8 man front defenses designed to stop the run. This is why we like to utilize this misdirection pass when we see over pursuing 8 man front defenses. 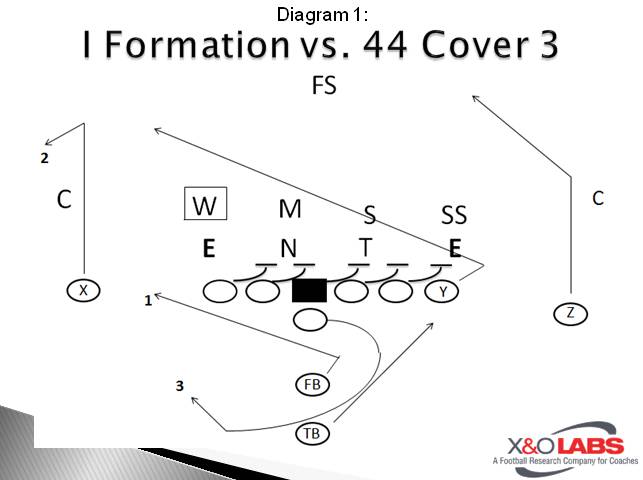 Here are the players’ assignments out of this look:

Fullback: His first step is towards the run to sell the play action. This is vital to getting LBs to pursue the play. Next, he will change direction hiding behind the offensive line emerging in the flat away from the run call. He is the primary target.

Y Tight End:             His first step will be towards the run. He will then attack the opposite side of the field climbing to a depth of 15 yards on the opposite sideline. He is instructed to get in the vision of the quarterback, but he cannot stretch to far as to conflict with the play side wide receiver’s deep comeback.

X Receiver: The play side wide receiver will run a deep comeback. We like to drive the route to 18 yards and comeback to 15 yards. The depth of this route can vary the depth depending on quarterback’s arm strength or receiver speed. We also adjust the route to a streak or post if when we want to clear the picture up for the quarterback.