Illusionists are experts at leading an audience’s eyes to see and believe something that is not actually happening. That is exactly what we are trying to accomplish when we marry our 12/21P outside zone runs with our movement passes (Bootlegs). We want defenses set on stopping the run, causing them to vacate zones in coverage for explosives when they are too aggressive downhill. At UNC, we spend an incredible amount of time making sure our movements look identical to our outside zone schemes. In practice, this means scripting an outside zone immediately followed by a movement to compare pad level, sense of urgency, and body language.

When we decided that we were going to major in outside zone, we made the investment in our professional development, film study, and practice time to be great at it. We felt we must do three things:

We communicate to our player’s through two main points in our outside zone schemes:

This forces defenses to run sideline to sideline while trying to maintain gap integrity. Offensively, it helps us collect stunts and allows the offensive line to be aggressive. This aggressiveness comes from the comfort knowing the offensive linemen are in combination. 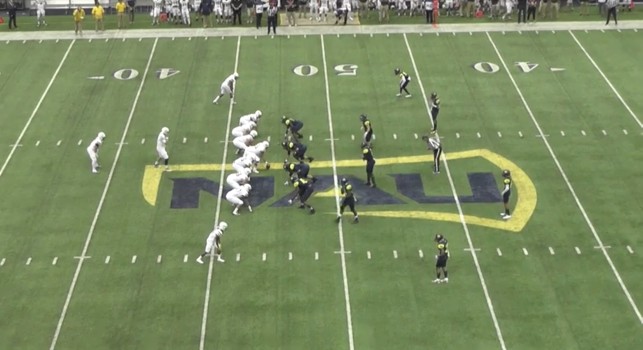 Deuce Oregon (16-17): 1-Back. 12 personnel runs designed to attack the perimeter. Our balanced formation gives the offense a two way go, based on block leverage or support players. (Shown in Diagrams below)

I Duck (17-16 Wk): 2-Back. 21 personnel runs designed to attack the perimeter to the weak side. Full flow from the backs.  (Shown in diagrams below Deuce cut-ups)

QB: Open playside @ 45°. After handoff drive for 5 hard steps and snap head around selling keeper fake.**Check Oscar: away from support in normal splits. To support with reduced splits and 6i**