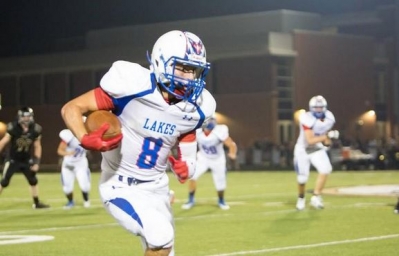 How many times have you seen an open window on the perimeter close instantly due to less-than-desired receiver blocking, despite dedicating an enormous amount of practice time on this exact skill? After cycling through a few receiver coaches and yelling at more than a few players, I have come to the realization that what receivers are asked to do in spread offenses is one of the toughest tasks in football. The solution was to take advantage of those reads by implementing RPOs into our offense. This allows us to now take advantage of perimeter defenders that are so well coached at reading run/pass cues.

Every offense needs a “hat-hanger” and there’s no question that Inside Zone is ours. Over 80% of our run game called on Friday nights is Inside Zone. Like most spread teams, one of the looks we really like with Inside Zone is the Zone Read; however, we incorporate a pitch option for our QB more than most Zone Read teams.

After self-scouting, we came to realize that our Triple Option was predictable, which, combined with the difficulty of WR perimeter blocking, was not yielding the desired results. That said, we were also frustrated with the lack of productivity when we called Bubble. Since both of these concepts were central to our overall game plan, we knew we needed to make a change. The result was combining those two schemes into an RPO concept. We found that this change would both minimize our predictability and allow us to put those well-coached perimeter defenders in a bind.

Our Choice package tells our back side, perimeter players to execute Bubble while all box players and WRs to the play side to execute Inside Zone. It is then the QB’s job to put us in the best play based on both what he is seeing before and during the play.

The first thing he looks at is the pre-snap alignment of the defense. If he sees cushion and/or outside leverage by our WRs to the backside of the Inside Zone play call, then he knows he has the green light to throw the Bubble. Even if he makes this decision, he still must mesh with the RB to force the defense to honor the possibility of run. If the QB has any doubt on whether or not to throw the Bubble, we instruct him to give the ball. We feel that giving the ball to the RB is never a wrong decision and is a much safer alternative to possibly guessing wrong on Bubble.

If the defense disguises well and spins post snap into a look that is not conducive to running Bubble, then the QB should give the ball to the RB. This is another reason why we always have the QB/RB mesh regardless of the pre-snap read. Below is an example of a “green light” for the QB out of a 3x1 set: