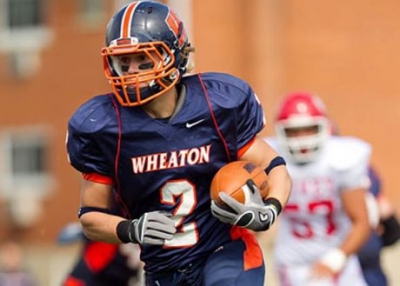 The vertical dig concept has been a staple of our offense here at Wheaton for a few years. This is a concept we now generally use from a 3x1 formation, but can also fit in a 2x2 set. This article will discuss how we install the concept by talking about each individual route, the QBs pre-snap thought process and post-snap progression and some basic progressions and variations to the concept.

There are several reasons we use this drop back passing concept at Wheaton College. First and foremost, we feel there is a great opportunity to attack the middle of the field if a defense chooses to play open coverage versus our 3x1 formations. We also believe there is a great opportunity to stress the middle and outside linebacker to the 3 receiver side based on the responsibilities in most open coverages. Lastly, it creates a difficult scenario where a defense must commit to defending our single receiver side with two defenders or risk giving up an easy throw and catch to our best receiver. 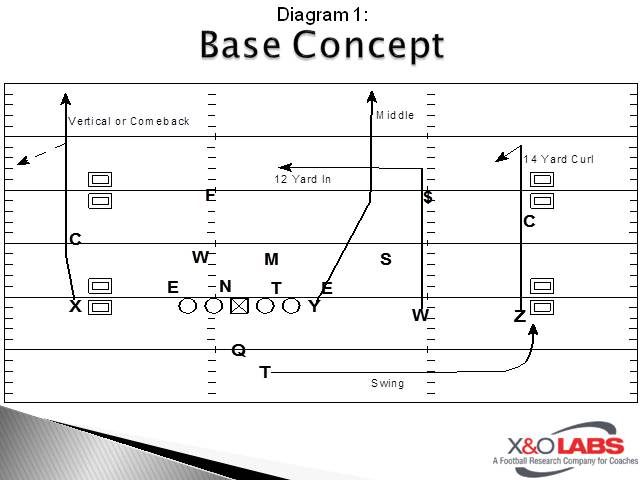 This route is coached to be an outside release on the cornerback with the goal of beating him deep. The receiver must determine by a depth of 10 yards as to whether he is going to be able to beat the corner deep or not. If the receiver does not think he can win deep, he will plant on his inside foot at 14 yards and work back to the sideline with an aiming point of 12 yards. On his release, the receiver must be aware of the sideline and remain 5 yards or more away from it at all times. This allows him room to adjust to a wide ball from the QB if he runs vertical or room to work away from the corner if he runs a comeback. His sideline spacing is vital to ensuring he has room to catch the ball when thrown in his direction.

This route is designed to occupy the middle of the field versus open coverage defenses. The receiver is coached to attack the inside hip of the field safety ($) and run vertical to his inside. I believe teaching a receiver to simply run down the middle of the field can lead to involvement from the backside safety (F) and make the throwing window smaller for the QB. Whereas, teaching the receiver to attack the field safety ($) gives the QB the ability to lead the receiver away from the field safety with more space to complete the pass before the backside safety (F) can get involved.
W – 12 Yard In Route. This route is self-descriptive. The receiver is taught to push vertical to a depth of 12 yards and the put his outside foot in the ground there. He will then make a square cut to the inside and work into an open window. The 12 yard depth of the route is important in relation to the QB’s progression and timing.